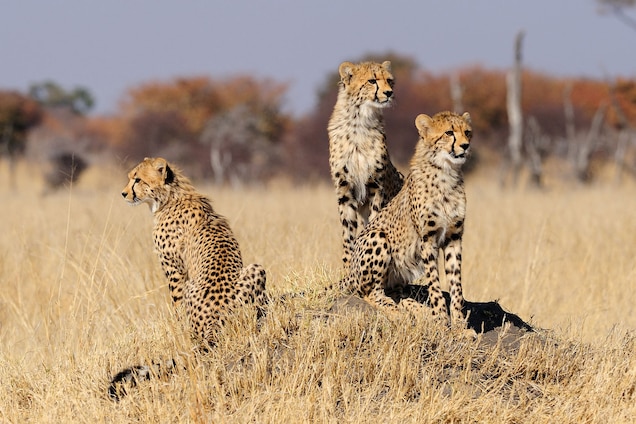 A group of passionate scientists have come together to demand that the International Union for Conservation of Nature list the cheetah as endangered.

Researchers with the National Geographic Society’s Big Cats Initiative released a new study in the journal PeerJ on December 11 with updated numbers of the cheetah population in southern Africa—the biggest of its remaining habitat.

Pulling from millions of pieces of data from prior observations, the team says there are at least 3,577 adult cheetahs in the region, with a buffer area that could support a few thousand more. That number is the largest population of free-ranging cheetahs in the world, and less than half of the estimate published November 2016. As it stands, the species is officially listed as vulnerable.

The paper gives two estimates for cheetah populations. First, after analyzing more than two million pieces of scientific data and 20,000 crowdsourced observations from tourists between 2010 and 2016, Weise and the researchers counted 3,577 free-ranging adults spread across less than 305,000 square miles of Namibia, Botswana, South Africa, and Zimbabwe. That’s a few thousand cheetahs for an area about the size of France.

“We have a larger degree of certainty in the lower estimate because it is based on those areas where we have recorded estimates of cheetahs,” says study co-lead author Varsha Vijay, who specializes in geospatial analysis for The Pimm Group at Duke University.

“There is greater uncertainty in the higher estimate because it assumes the very optimistic scenario that all the areas we identified as potential cheetah habitat are occupied by cheetahs at similar densities to the areas with confirmed cheetah presence,” Vijay says.

Another study released last year estimated there were 7,100 cheetahs in the region. Both these numbers are down from the 15,000 cheetahs counted in southern Africain 1975. The 2016 paper, and other conservation groups, called for the cheetah’s status to be changed from “vulnerable” to “endangered.”

“We know about three and a half thousand cheetahs. There could be twice as many, but we can’t prove it,” Weise says. “I may be the nerd that crunches the numbers, but if I’m not heard, that evidence makes no difference.”

Humans have altered more than 90 percent of the historic cheetah’s habitat, which once ranged across stretches of Africa and Asia. Today, the cats are mostly restricted to private land on six African countries, with a smaller population in East Africa, and their populations are decreasing.

The study found that only 18.4 percent of the southern African cheetah range is within internationally recognized protected land, such as South Africa’s Kruger National Park. Most of the big cats live in areas allocated for livestock and game production.

“We are all very concerned about these small populations outside of protected areas,” says Laurie Marker, founder and executive director of the Cheetah Conservation Fund, who was not part of the new study. “The majority of the cheetahs through southern Africa are not in protected areas, and that makes them extremely vulnerable.”

People have repurposed the land that cheetahs used to prowl for agriculture and livestock uses. Farmers will sometimes kill the animals if they’re perceived as threatening livestock, though the big cats rarely go after domesticated animals. Cheetahs are also hit by cars and poached for bush meat.

In general, the IUCN, the main source for species conservation status, will relist a species from vulnerable to endangered if there’s a decline in 50 to 70 percent of the population over 10 years or three generations (whichever is longer). If a quantitative analysis can show the species has a 20 percent chance of becoming extinct within the next five generations (or 20 years), it can officially be labeled as endangered.

“It affords them a lot more protection on an international level, recognizing that the general population trend is downwards,” Weise says. “It just generates a whole lot more attention for a species that has been listed vulnerable for a long, long time.”

But even if cheetahs are relisted, local farmers will still perceive them as a threat, Marker says. More steps must be taken to rehabilitate the big cat populations.

Looking to the East

There’s already a precedent for cheetah extinction. A subspecies of Asiatic cheetahs(Acinonyx jubatus venaticus) are the world’s most critically endangered big cats. They’re similar to their African cousins, but slightly slimmer and with longer legs.

Asiatic cheetahs once roamed all through India, Pakistan, Afghanistan, and Central Asia. But today, harmed by humans, they can only be spotted in protected pockets of Iran like Kavir National Park and Touran National Park.

As of August 2016, fewer than 40 Asiatic cheetahs remained in the wild. Their numbers are so low that they were once thought to be extinct—until it was discovered they had retreated to Iranian deserts.

Iran has taken steps to protect its cheetahs by launching conservation programs to replenish the animals’ supply of prey. The country has also worked to raise awareness by printing a picture of the cat on their soccer team’s jerseys and campaigning with the Iranian actress Hedieh Tehrani.

Weise says that if the cheetah’s conservation status is changed, it will take a few years for the countries’ governments to adopt international policies to protect the cats. Political stakeholders will have to analyze the paper’s results and decide how relevant cheetah conservation is for their countries. It could take five to 10 years for new legislation to develop.

This new data is critical, as it gives politicians, policymakers, and other funders hard numbers that could help allocate money toward saving the species.

“It puts them on the agenda,” Weise says. “It’s a red flag there is a problem.”

This article was first published by National Geographic on 11 Dec 2017. Lead Image: Three grown-up cheetahs enjoy one of the few open grassland area in Zimbabwe’s Hwange National Park. East Africa has a large population of the big cats, behind southern Africa.
PHOTOGRAPH BY STÉPHANIE PÉRIQUET.

We invite you to share your opinion whether the Cheetah should be classified as “Endangered”? Please vote and leave your comments at the bottom of this page.