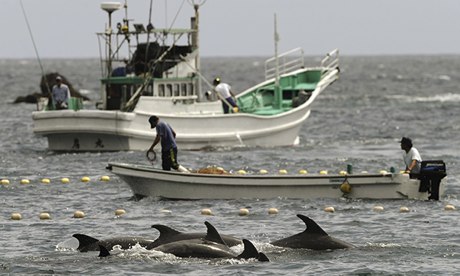 The controversial six-month dolphin hunting season began on Monday in the infamous town of Taiji, but bad weather would delay any killing, a local official told AFP. The annual catch, in which people from the southwestern town corral hundreds of dolphins into a secluded bay and butcher them, was thrust into the global spotlight in 2009 when it became the subject of the Oscar-winning documentary The Cove.

“The dolphin hunting season started today and will last until the end of February,” said an official of the Taiji fisheries association, adding the season for hunting pilot whales, which also begins today, will last until April. But bad weather on Monday meant there would be no hunting on the day, he said.

Earlier this year, the slaughter sparked renewed global criticism after US ambassador to Japan Caroline Kennedy tweeted her concern at the “inhumaneness” of the hunt. Defenders say it is a tradition and point out that the animals it targets are not endangered, a position echoed by the Japanese government.

They say Western objections are hypocritical and ignore the vastly larger number of cows, pigs and sheep butchered to satisfy demand elsewhere. But critics of the practice say there is insufficient demand for the animals’ meat, which in any case contains dangerous levels of mercury.

They say the hunt is only profitable because of the high prices live dolphins can fetch when sold to aquariums and dolphin shows. On Sunday around 30 people marched in Tokyo to protest the hunt, which they say sullies Japan’s reputation abroad.