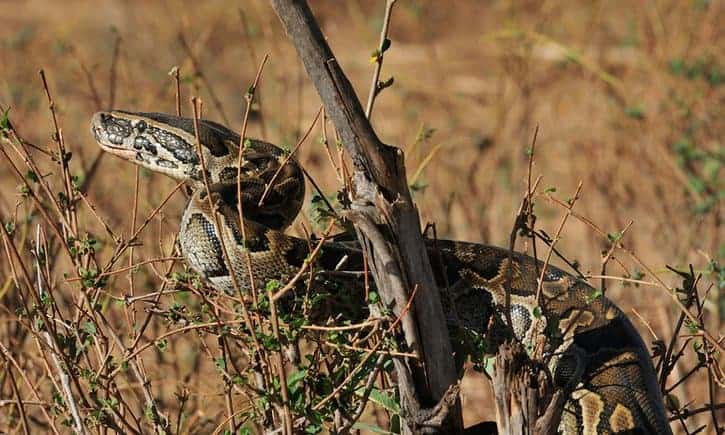 Kenya has banned the export of various snake species, including the African rock python, to zoos and pet shops around the world after reports of animal abuse and snakes being sold on the black market for their meat and skins.

The trafficking of the endangered snakes by cartels is also having a negative impact on the environment, said authorities.

“We have conducted strong research and it shows that the ecology of the snakes has been negatively affected, especially the pythons,”said Dr Patrick Kinyatta Malonza, senior research scientist in charge of herpetology at the National Museums of Kenya.

“Their breeding patterns have changed and their sizes when fully grown have reduced in just a few years. For instance, the rock python used to grow up to a length of 16 feet; now a fully grown one is, on average, just 10 feet long,” said Malonza.

Malonza added that less than 10 years ago a rock python used to produce about 33 young on average, but now it is unusual for a female snake to produce even half that number.

“Constant illegal smuggling has been the biggest single obstacle,” Malonza said. “It is even worse than habitat destruction. When you smuggle, you also interfere with breeding [and] their feeding patterns.”

He said it is difficult to estimate the number of rock pythons in the wild as no census has ever been done but he estimates that only a few hundred remain in the wild in east Africa. The number does not include snake farms, which have also been banned from exporting.

The Kenya Wildlife Service (KWS), the government agency in charge of wildlife management, played a big role in imposing the ban that took effect this month. The snakes were destined for zoos and pet shops in the UK, Czech Republic, Germany, the US, Mexico, Brazil and China respectively where, the KWS said, they fetch between $100 and $200, depending on the type of snake.

According to Paul Gathitu, the KWS spokesman, it is now illegal to export pythons following the ban. Licences issued for scientific research and venom extraction abroad have also been suspended.

“We have intercepted several python skins at the airport and made several arrests in the last week,” said Gathitu.

“These crooks now have a better way of doing it. It is much easier to smuggle the young ones. Young pythons are not as easily detected by machines as fully grown ones. They are then bred overseas in zoos and pet shops until they are of adult size,” said Gathitu.

“With the current anti-poaching laws, one can serve a prison term of up to 20 years if found guilty,” said John Mwangi, a lawyer who has helped convict many criminals involved with wildlife trafficking. “Corruption still remains a big obstacle as perpetrators can easily bribe their way through law enforcement.

“If you can bribe airport security, including police and detectives in most major airports, what can you not do? Many criminals also threaten them with death as they are well connected politically and economically. So this is still an obstacle.”

This article was first published by The Guardian on 30 Jan 2017.

We invite you to share your opinion whether the export of snakes to zoos and pet shops should be banned? Please vote and leave your comments at the bottom of this page:

Editorial Comment: The purpose of this poll is to highlight wildlife crime and to encourage discussion on ways to stop it. By leaving a comment and sharing this post you can help to raise awareness about this important wildlife issue. Thank you for your support.