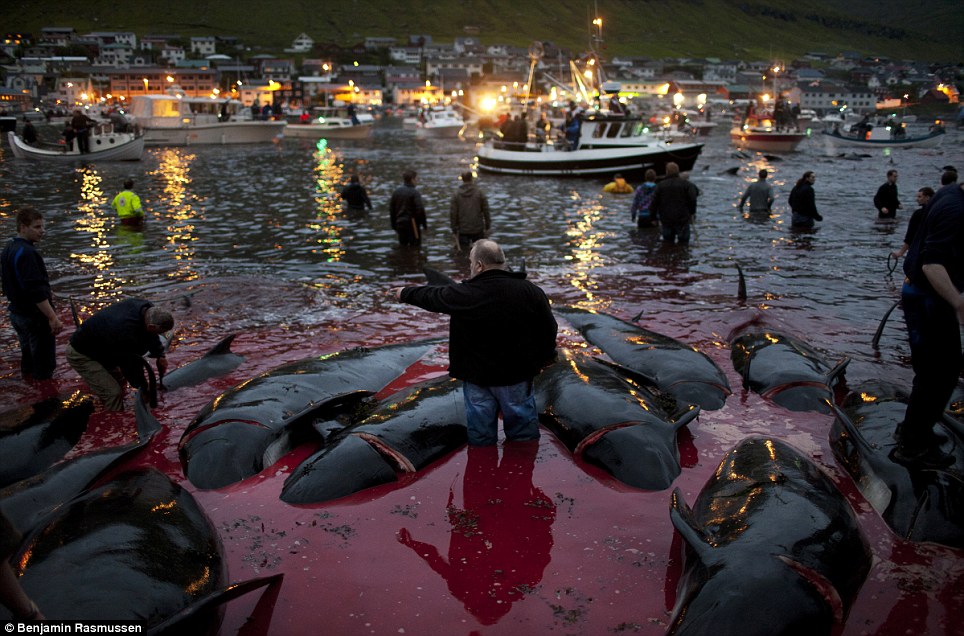 The recent arrest of 14 volunteers working to stop whaling in the North Atlantic Ocean’s Faroe Islands has focused a spotlight once again on a local tradition stretching back over a thousand years.

Six of the protesters were found guilty this week of interfering with the grindadráp, or grind, as these drive hunts are called, according to a statement released by the Sea Shepherd Conservation Society. The remaining eight will appear in court on September 25. The activist group often makes headlines for the confrontational tactics used by some of its members—such as ramming whaling ships in the ocean around Antarctica.

The organization’s campaign to end these hunts began in the 1980s, says Paul Watson, founder of Sea Shepherd, and won’t stop until the practice disappears.

During a grind, a flotilla of small boats drives whales or dolphins into a shallow bay where they can be easily killed with knives. Grinds are the longest continuously practiced and relatively unchanged whaling tradition in the world, says Russell Fielding, a geographer from the University of the South in Sewanee, Tennessee. He has studied the Faroe Island grinds since 2005.

Other cultures in the Arctic and Europe started whaling long before the Faroese, Fielding says. But they have either stopped or changed their techniques quite a bit.

Protests against a hunt that provides food and a sense of community for this semi-autonomous nation stir up strong feelings on both sides. “It [is] important for us to protect our ways,” says Bjarki Dalsgarŏ, a 28-year-old Faroese who has participated in grinds, in an email interview. He adds that the protests draw community members together to stand against “these people telling us how to do or not do things.”

“They do feel a real cultural attachment to [the grinds],” notes Fielding. “However, the Faroese are quick to point out that it is for food primarily.”

The meat can be boiled, broiled as a steak, or air-dried, says Dalsgarŏ. “Air-dried whale meat is quite common and is considered a bit of a delicacy,” he notes. It is usually eaten raw in thin slices. In his family, the blubber is eaten as a side, along with potatoes.

Recent concerns over heavy metal toxins in the meat and blubber have reduced their consumption somewhat, Fielding says. But even the head physician for the islands—a kind of “surgeon general”—says he’ll still eat it at weddings, Fielding adds. “It’s shifting from a full meal to more of a symbolic food.” (See “Toxins Accumulate in Arctic Peoples, Animals, Study Says.”)

The Faroese are opportunistic hunters who launch a grind only when specific conditions are met. The animals must be close to shore, near one of 23 beaches approved as a landing beach. The weather and currents have to be calm enough. And there have to be enough participants to crew the dozen or so powerboats required to drive the animals toward shore.

In some years, such as in 2008, conditions weren’t right and no whales were taken. But over the past three centuries, the Faroese have taken an average of 838 pilot whales and 75 dolphins each year, Fielding reported in a 2012 study.

He based that study on the islanders’ detailed records of every animal taken in every grind going back to 1709. (Spottier records go back to 1587.) The data include the species taken, the beach used, and how much meat and blubber the animals produced.

There’s no whaling “profession” on the islands, says Dalsgarŏ. Everyone has a regular day job, but if they’re available when the call goes out for a grind—usually over cell phones, the radio, or social media—then they’ll try to get to the water in time for the hunt.

The Faroese usually target long-finned pilot whales, says Fielding, although they will also take bottlenose dolphins, white-sided dolphins, and Risso’s dolphins. Risso’s dolphins are sometimes landed even though they aren’t on the Faroe government’s list of species approved for hunting.

None of the species are considered endangered, although the International Union for Conservation of Nature lists long-finned pilot whales as “data deficient,” meaning there isn’t enough scientific evidence to judge the status of the North Atlantic population.

Once the boats drive an animal onto an approved beach, people on shore go in with knives and cut through the pilot whale’s neck and break the spinal cord. Death occurs quickly, Fielding says, although there is debate as to exactly how long it takes.

“There’s a lot of blood,” he says, and waters in the bay quickly turn scarlet. “The first time I saw it, it was very hard to watch,” Fielding adds. The geographer, who is also a hunter, thinks that “people [get] so upset because they don’t often see animals being turned into food in any context.”

Once the animals are dead, the chief of police apportions the meat to people in the community using a traditional calculation. Villagers are responsible for butchering their own meat.

“That’s a skill that people are expected to have—the ability to cut up an animal into meat,” Fielding says. “It usually takes an hour or two for all the animals to get butchered.” Someone then takes the spinal cords and offal out into open water to dispose of them.

Fielding suspects health concerns are more likely than protests to drive down consumption of whale meat in the Faroes. The islanders feel strongly about the tradition, he says.

“I doubt you’ll experience the sense of community and teamwork anywhere else in the world,” says Dalsgarŏ. “Everyone comes together to help provide for the community and for themselves.”

We invite you to vote FOR or AGAINST the continuation of the Faroe Islands’ whale slaughter. Please vote and also leave your comments at the bottom of this page.

The editorial content of this article was first published by National Geographic on 11 Sep 2014.