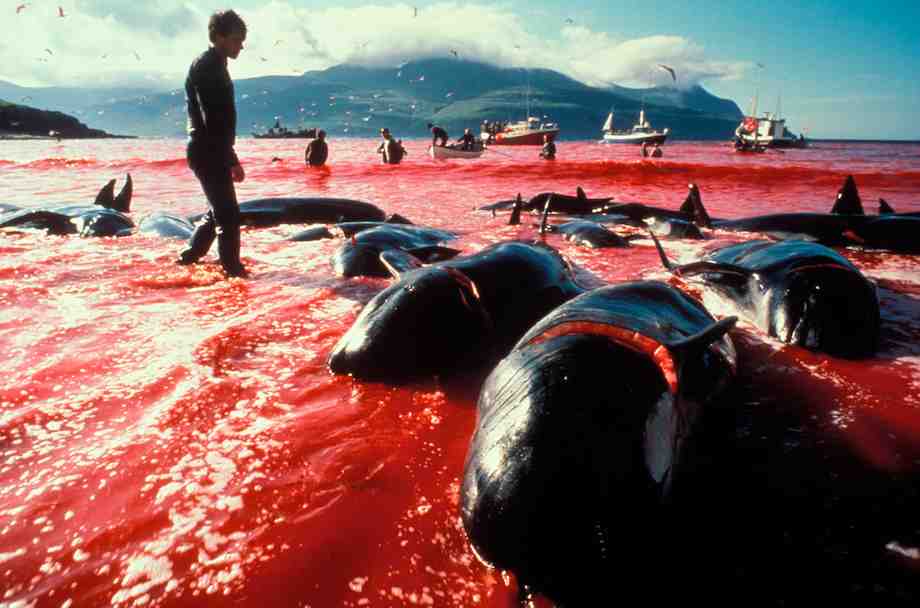 Faroese villagers have slaughtered about 250 pilot whales in the past 24 hours according to Sea Shepherd activists monitoring the traditional summer hunts in the north Atlantic islands.

The whale pods, which migrate past the islands in July and August, were herded by flotillas of small boats on to two beaches where villagers waded into the water to kill them with lances.

Seven protesters, mainly from European countries, have been arrested this week for allegedly interfering with the the traditional community hunts, known as “grindadráp”.

Amsterdam-based direct action group Sea Shepherd, which has 36 people on two boats close to the islands and a further 20 supporters on Faroese islands, claimed on Friday that the Danish navy was helping the Faroese whalers. Although the islands are self-governing, they are financially dependent on Denmark.

“It was perfectly clear that the Danish navy ships Triton and Knud Rasmussen were present to guard one grindadráp, and that the slaughter [only] proceeded with the full consent of the Danish navy,” said Wyanda Lublink, captain of the Sea Shepherd boat Brigitte Bardot.

“How Denmark – an anti-whaling member nation of the European Union, subject to laws prohibiting the slaughter of cetaceans – can attempt to justify its collaboration in this slaughter is incomprehensible,” he said.

Footage from the hunt suggests that 111 pilot whales were killed on a beach at Nólsoy and a further 142 near the capital Tórshavn.

Whaling in the Faroes has been practised for hundreds of years and is regulated by the Faroese authorities. Around 800 pilot whales and some dolphins are killed annually.

This article was first published by The Guardian on 24 Jul 2015.

We invite you to share your opinion whether the Faroe Islands’ whale slaughter should be banned? Please vote and leave your comments at the bottom of this page:

In the event that you voted to ban the Faroe Islands’ whale slaughter, please sign the petition: