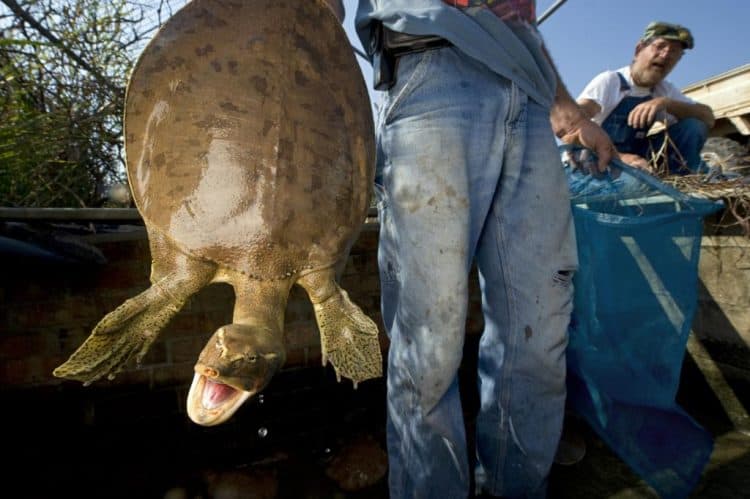 Anyone wanting a gourmet meal in the early 1900s in the United States could always count on finding one special dish: turtle.

Whether served as soup or steak, turtle meat made an appearance everywhere from presidential dinners to the first transcontinental trains. It became so desirable that trappers began wiping out diamondback terrapins, alligator snapping turtles, and other species from U.S. wetlands to satiate demand. But by the 1920s the turtle craze began to fade, and populations began a slow rebound.

Now turtle lovers have reason to worry all over again. Demand has soared in China, where they’re sought as pets, as food, and as traditional medicine, said to boost everything from the immune system to sexual prowess. By around the year 2000 China’s turtles had been decimated, and some 75 percent of Asia’s 90 freshwater turtle species—including the Yangtze giant softshell turtle, the largest freshwater turtle on Earth—became threatened with extinction.

During the past few decades freshwater turtle species in the U.S., where Southeastern states hold some of the world’s highest concentrations, have been making up the Chinese shortfall. This appetite for turtle has exacerbated the effects of U.S. demand for pet turtles and turtle meat, as well as habitat loss in parts of their range.

In recent years turtle-rich states such as Florida and Texas have banned or restricted their capture, fearing that overcollection could lead to the collapse of wild populations. Louisiana, however, still allows almost unfettered collection of its turtles. There, people can apply for a license to trap any of the state’s 19 freshwater species, except for the more vulnerable alligator snapping turtles, box turtles, and razor-backed musk turtles. Residents pay $25 for a license, and out-of-staters, $80, with no limit on the number of turtles they can take.

The Center for Biological Diversity and the Gulf Restoration Network want that to change. In October the conservation organizations filed a petition with the Louisiana Department of Wildlife and Fisheries calling for the state to ban harvesting wild turtles for commercial purposes. Unrestricted collection could destroy turtle populations in the state, according to the petition, which points out that Louisiana has the most permissive turtle harvesting policies in the Southeast.

“Turtles are a very important part of the food web,” says Elise Bennett, an attorney for the Center for Biological Diversity. They’ve been around for 300 million years, and they help maintain the health of rivers and lakes by scavenging snails, water plants, and dead aquatic creatures. “The fact that someone could take as many as they wanted is a huge concern,” she says.

Biologist Amity Bass, director of the coastal and nongame resources division at the Louisiana Department of Wildlife and Fisheries, agrees. “We need to get a handle on our regulations and how we can make them more current and meaningful.”

What We Don’t Know

It’s impossible to know how many of Louisiana’s turtles have been plucked from the wild for commercial purposes—until as recently as August, the state didn’t require turtle retailers to record their purchases.

Export papers collected by the U.S. Fish and Wildlife Service, the agency tasked with monitoring and protecting wildlife, should—in theory—help to fill in at least some gaps in knowledge. The information reveals that 17 million wild, live turtles were shipped commercially from the United States between 2012 and 2016, with 16 million passing through New Orleans.

But the Fish and Wildlife Service acknowledges that those numbers are flawed. Craig Hoover, head of the division devoted to protecting wildlife at risk from trade, says that inspections of shipments and discussions at various workshops indicate that most of those “wild” exported turtles have actually come from turtle farms in Louisiana, where raising and selling hatchlings is big business. He says that when the origin of the turtles isn’t specified, the default categoriziation is “wild,” even if it’s clear that they came from a farm. And, he adds, farmers themselves often designate their turtles as wild, not captive.

The inaccurate documentation brings up a broader issue that concerns conservationists and scientists: It’s hard to evaluate existing policies without a clearer picture of what’s really happening. “This is the only data we have about exports,” Bennett says. “It’s especially concerning for people who are involved in conservation that the data is not exactly as useful as we’d like.”

That fewer wild turtles are exported than the trade data suggest is a good thing for turtles—but it doesn’t mean they’re in the clear.

Snatched Before They Hatch

Most of Louisiana’s turtles aren’t currently described as vulnerable to extinction by the International Union for the Conservation of Nature, the organization that sets the conservation status of wildlife. But turtle experts worry that profligate collection of wild turtles could put them on a risky path.

Freshwater turtles are especially vulnerable to exploitation because it can take as long as 20 years for them to sexually mature, and their eggs and hatchlings have many predators, such as birds and raccoons. “Commercially harvesting adults out of the wild is just not sustainable,” says Ivana Mali, a wildlife biologist at Eastern New Mexico University.

The petition filed last month cites a 1997 study, for example, that found that red-eared sliders from protected sites in the U.S. were larger and more abundant than turtles from Louisiana, suggesting that fishermen had targeted adults, sold as pets and for their meat. And it took until 2009 for populations of common snapping turtles in Michigan to approach their previous levels after several years of intensive collection during the 1980s.

In Louisiana, farms have helped alleviate some pressure on wild turtles. The state’s operations rake in millions of dollars a year selling hatchlings as pets and to turtle farms in China, a growing business.

But farms can’t meet all the demand. For one thing, it’s expensive to rear turtles to adulthood. Mali and other researchers found that for a U.S. farm to make a profit from selling an adult red-eared slider, it would have to set prices much higher than the going rate for an older, wild slider. “It simply doesn’t pay off,” she says.

Plus, some collectors favor wild turtles over captive-bred ones, according to Peter Paul van Dijk, the director of the tortoise and freshwater turtle program at Conservation International. And, he says, turtle trends in China—which drives much of the global turtle trade—change fast, so it’s possible that future demand for species not being farmed today will threaten new wild populations tomorrow.

Turtle advocates say that as long as governments fail to monitor and protect the creatures, losses could be extreme.

“We learned over a hundred years ago that [commercial] hunting was a very bad idea that led to the elimination of wild animal populations,” says Michael Forstner, a biologist with Texas State University. You need look no further for evidence of this, he says, than to the near demise of the American bison and the total extinction of passenger pigeons, once the world’s most abundant bird.

In Louisiana, state biologist Amity Bass hopes to prevent that. She’s working on draft regulations that would further restrict collection of wild turtles. “There are a lot of people who make a living from commercial fishing, so if it’s something that’s sustainable, we support these people being able to have a livelihood,” Bass says. She hopes to present the regulations to Louisiana’s wildlife commission, which will vote on the plans, early in 2017.

This article was first published by National Geographic on 10 Nov 2016.

We invite you to share your opinion whether the harvesting of wild turtles should be banned? Please vote and leave your comments at the bottom of this page: