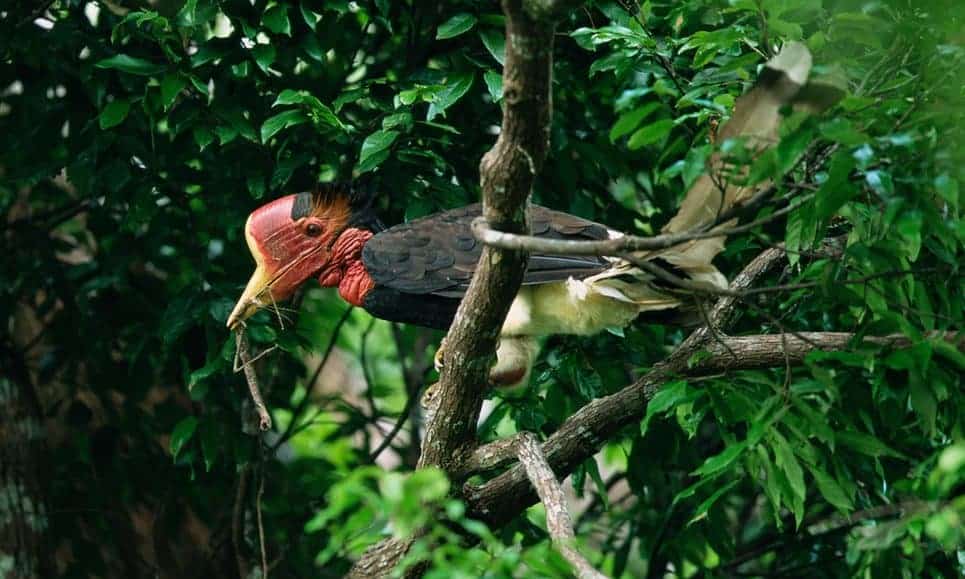 A virtually unknown ivory poaching crisis is rapidly driving one of the world’s most spectacular birds to extinction, a global wildlife summit has heard.

The helmeted hornbill, found mainly in Indonesia, Borneo and Thailand, has a solid red beak which sells as a “red ivory” on the black market, for several times the price of elephant ivory.

The huge birds have been caught for centuries for their tail feathers, prized by local communities, but since 2011 poaching has soared to feed Chinese demand for carving ivory, even though the trade is illegal, sending the hornbill into a death spiral.

The bird, which can have a wingspan of 2m, was officially listed as “near threatened” in 2012 but within three years had plunged three danger levels to “critically endangered”. Over 2,100 heads were seized in Indonesia and China in the two years up to August 2014, according to the Species Survival Network, and some estimates suggest 6,000 a year are killed.

The government of Indonesia set out the hornbill’s plight on Tuesday in front of the 182 nations of the Convention on International Trade in Endangered Species, gathered in Johannesburg, South Africa. Cites had already given its highest level protection to the hornbill in 1975 – all trade is illegal. But Indonesia demanded more international action to break the crime syndicates that smuggle the beak ivory, known as casques.

“The high price reached by the casques motivates hunters to kill all the hornbills they cross, including juvenile birds,” said the Cites delegate from Indonesia, where police have arrested and prosecuted 15 hornbill traffickers since 2015. “The illegal trade in elephant ivory and rhino horn has been well documented, however, the illegal trade in casques has been little known. If this highly profitable illegal trade is not curbed, the existence of this majestic species is in danger and is likely to lead to extinction.”

“It is in huge trouble,” said Elizabeth Bennett, from the Wildlife Conservation Society. “They have this fabulous call, that ends in cackling laughter, which you can hear from a mile away. But they are incredibly easy to hunt because of that call: it must be the most spectacular bird call on the planet.”

The Cites nations agreed urgent action was needed and will decide on its precise form in the coming days. “Indonesia is calling on other countries to take hornbill ivory as seriously as the other ivory,” Bennett said. The Cites action is a “big red flag”, she said, which will be very valuable in pressuring governments, including China, to act.

Bennett said the slow-breeding birds were particularly vulnerable to poaching. They mate for life, and when ready to lay their one or two eggs per year, the male uses mud to seal the female into a protective hole in a tree. The male then feeds the female and chicks through a slit, meaning if the male is shot, the whole family starves. The bird’s casque is used to hammer out insects from rotting wood, or to fight.

The hornbill has also been harmed by the loss of much of its habitat to palm oil plantations. “It has not been helped by the vast clearances of lowland forest in Borneo and Sumatra,” said Bennett.

“Only global cooperation can stop the illegal trade in hornbill ivory before it is too late,” said the Cites delegate from the Indonesian Hornbill Conservation Society. “I have witnessed the rampant illegal poaching in the rainforest.”

On Monday, the Guardian exposed the central role of international organised crime groups in wildlife trafficking in Asia and linked the illegal trade to corrupt officials at the highest levels. The investigation also revealed the crime family at the centre of Asia’s animal trafficking network.

Responding to the investigation, Heather Sohl, WWF-UK’s chief advisor on wildlife, said: “This highlights the necessity to tackle the organised criminal networks that are so entrenched in wildlife trafficking, which is estimated to be worth over £12bn a year. Corruption often goes hand in hand with these large-scale criminal operations and for the first time ever corruption will be discussed this week at Cites.”

Iris Ho, of Humane Society International, said: “No governments should give cover to these exposed wildlife traffickers who have profited, making tens of millions of dollars from the slaughter of elephants, lions, pangolins and rhinos.

“We urge the Cites [nations] to give these animals the highest level of protection possible and ensure that this nexus of Africa-Asia wildlife traffickers are swiftly brought to justice.”

This article was first published by The Guardian on 28 Sep 2016.

We invite you to share your opinion whether the illegal trade in hornbill ivory should be stopped? Please vote and leave your comments at the bottom of this page: