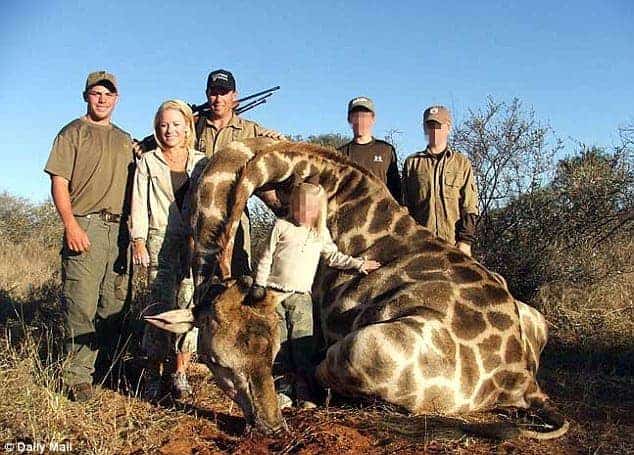 Documentary filmmaker David Hamlin recalls the adrenalin rush when he was flying over the Democratic Republic of the Congo’s Garamba National Park in late June and spotted three giraffes standing in a small clearing. “Seeing these giraffes from the air was really exciting,” says Hamlin, who was on assignment for National Geographic. “Seeing them anywhere is really exciting.”

That’s because Garamba is huge, sprawling over nearly 2,000 square miles (5,180 square kilometers) of mostly forested land, and it’s a rare, lucky event to come across any of its 40 remaining giraffes.

But Hamlin’s exhilaration at seeing and photographing the giraffes didn’t last long. Twelve hours later rangers reported hearing gunshots, and they later discovered three bullet-riddled giraffe carcasses rotting in the sun. “It was horrible for me and the team,” Hamlin says—”the crushing realization that most likely it was these guys, the ones we’d seen.”

Hamlin decided to document the aftermath of the tragedy to raise awareness about poaching in the park, which is managed by the nonprofit organization African Parks in association with the Congolese Institute for the Conservation of Nature, a government agency.

Garamba is Africa’s second oldest national park and has been hit hard by poaching in recent years as civil unrest has escalated in the region. Its rhinos have been wiped out, and elephants have suffered huge losses. The same goes for its Kordofan giraffes, one of Africa’s nine giraffe subspecies.

Fewer than 2,000 now roam central Africa, according to Julian Fennessy, co-director of the Giraffe Conservation Foundation, a Namibia-based organization. Garamba’s Kordofans represent the last population in the Democratic Republic of the Congo. “If the number slips in half, then we’re in a real dire situation,” Fennessy says. “Every single giraffe is valuable.”

Congolese usually kill the giraffes for one body part: their tails, considered a status symbol in some communities. Meanwhile men from neighboring South Sudan target the giraffes for their meat to feed impoverished villagers. But the massive bodies (giraffes can grow to 18 feet and weigh up to 3,000 pounds) of the three giraffes were intact—only the ends of their tails were missing.

According to Leon Lamprecht, joint operations director for African Parks, men “use the tail as a dowry to the bride’s father if they want to ask for the hand of a bride.” The long black hairs are often turned into fly whisks.

One of the dead giraffes had a satellite collar and was being monitored by Garamba’s rangers. “What an absolute waste,” Lamprecht says.

This article was first published by National Geographic on 10 Aug 2016.

We invite you to share your opinion whether the killing of giraffes should be outlawed? Please vote and leave your comments at the bottom of this page: