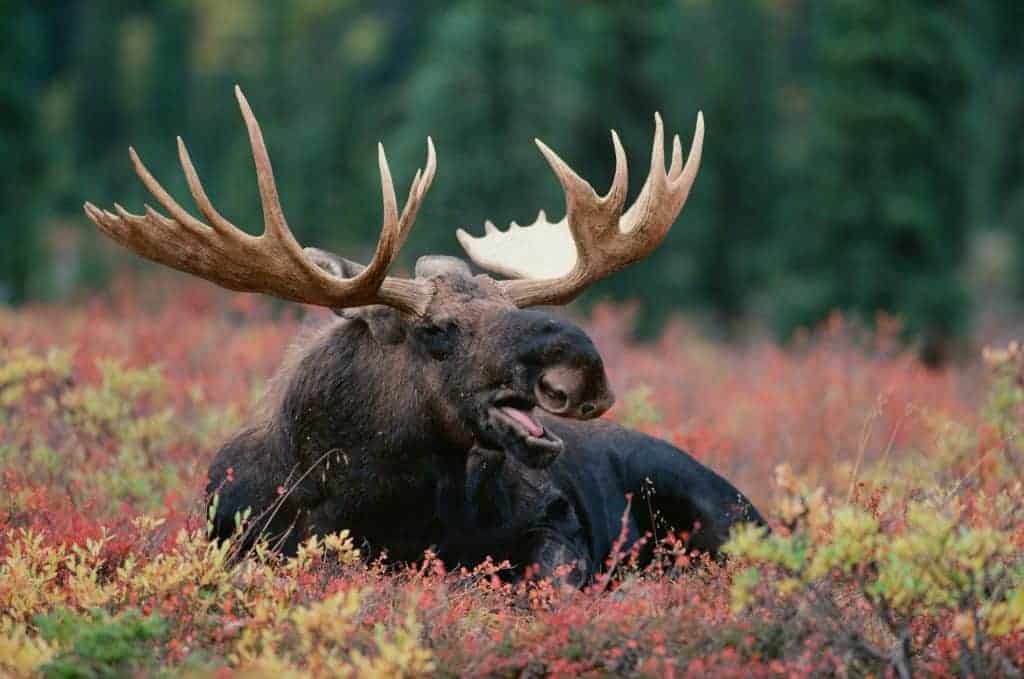 I’m on an early morning tour bus with Vince Crichton, retired wildlife biologist and renowned moose expert. In between telling moose stories and pointing out other wildlife, like a red-tailed hawk, Crichton pauses to say, “Fresh tracks.”

Soon afterward two moose, as fleet as they are massive, dart through the trees, away from our vehicle. This brief glimpse will be our only one today. For an animal that can grow as large as 1,800 pounds, it’s amazing how well they can avoid being seen. Still, it’s good to know they’re there.

When Minnesota’s moose population plummeted from 8,160 in 2005 to 2,760 in 2013 —and other areas reported declines—it set off alarms in the media that things were getting rocky for Bullwinkle.

The troublesome news prompted Weird Animal Question of the Week to attend the 50th North American Moose Conference Workshop and 8th International Moose Symposium in Brandon, Manitoba, chaired by Crichton, to find out, Should we be worried about North American moose?

Like this wide-ranging animal itself, the moose story is all over the map.

“Minnesota has a decline; North Dakota has an increase. How do you explain that? Well, moose colonize new areas,” says Lee Kantar, moose biologist with the Department of Inland Fisheries and Wildlife in Maine, which shares a state line with New Hampshire that moose routinely cross. Unfazed by our human idea of borders, they disperse to where conditions are better, preferring to browse on young forest growth.

Parasites, however, are highest on the list of culprits for declining moose numbers—including the brain worm, which causes debilitation, erratic behavior, and death; and blood-draining winter ticks, whose numbers have been boosted by warmer, shorter winters. Pete Pekins, a biologist at the University of New Hampshire, cites three years of high tick infestation and high calf mortality as “the best evidence of climate change” impacting moose.

A much larger predator—wolf packs—has been the second highest cause of Minnesota moose deaths, but many moose “killed by wolves had predisposing conditions that made them more susceptible,” including parasites, disease, and injuries, says Michelle Carstensen of the Minnesota Department of Natural Resources.

One moose, known as Case 192, was found dead in a watery ditch with tick infestation, brain worm, and liver fluke. She was calving when she was attacked by wolves but still “got up and left the scene to go 300 meters [980 feet]” to die, “so this is the complexity we’re dealing with” in analyzing causes of death, says Carstensen.

Moose populations are also down throughout southern central Canada. But in other places, such as Washington State, moose numbers are up. Likewise, in Newfoundland, where parasites and predators are scarce, the moose population peaked at 140,000 in the mid-1990s, which prompted an increase in hunting quotas.

According to the Newfoundland and Labrador Wildlife Division Department of Environment and Conservation, the moose population now stands at a robust 112,000 (not counting those living in national parks). With these high numbers, moose-vehicle collisions are becoming a more frequent problem on the island.

Alaska is “approaching 200,000 moose and growing,” as warming temperatures have enabled shrubs, which the moose feed upon, to expand northward, says Tim Timmerman, retired wildlife biologist with the Ontario Ministry of Natural Resources, in a presentation. Summer temperatures in the region have increased 23 percent since 1860.

The International Union for the Conservation of Nature lists moose as a species of least concern. So, while they’re not in imminent danger of disappearing, wildlife experts will continue to monitor their populations. Even an animal as large and imposing as the North American moose is vulnerable to emerging environmental pressures.

This article was first published by National Geographic on 17 Sep 2016.

We invite you to share your opinion whether moose should be added to the endangered species list? Please vote and leave your comments at the bottom of this page: