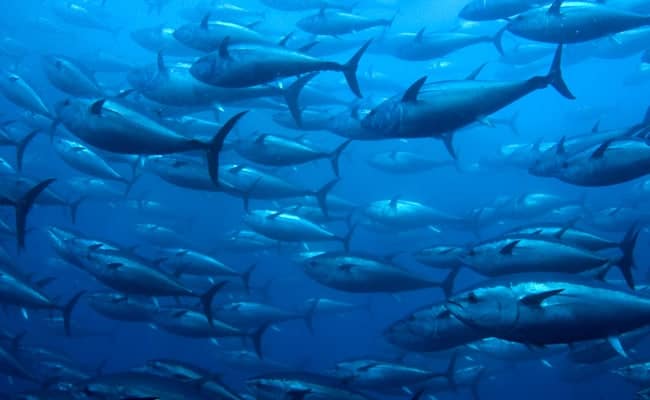 Pacific bluefin tuna have declined by a staggering 97 percent, but the Trump administration has declined to grant them much-needed federal protection that would have helped ensure their survival.

Pacific bluefin tuna are slow-growing, taking years to fully mature, and long-lived, which makes them especially vulnerable to overfishing. The demand for them, particularly for sushi, has led fisheries to drive them down to less than 3 percent of their historic population.

In June 2016, a coalition of a dozen conservation organizations requested that the National Marine Fisheries Service (NMFS) protect Pacific bluefin tuna as endangered under the Endangered Species Act over concerns that overfishing is going to cause their extinction if action isn’t taken to stop it.

The petitioners argued that most tuna taken today is caught before they can reproduce. While the mature fish would soon die out of old age, there aren’t enough young fish to mature and reproduce, which is putting their future in serious jeopardy.

Not only would their anticipated extinction be a tragedy for this species, but also for the ecosystems they live in. Pacific bluefin tuna are considered apex predators, who migrate thousands of miles across the ocean. Although it’s not entirely clear what will happen if they disappear, their absence is expected to have a widespread impact.

The following October, these tuna came a step closer to getting protection they need after the agency announced that it may be warranted, and it launched a status review. Unfortunately, this week they were officially denied.

“The Pacific bluefin tuna does not meet the definition of threatened or endangered under the Endangered Species Act; that is, it’s not likely to become extinct either now or in the foreseeable future,” saidChris Yates, assistant regional administrator for protected resources at the NOAA Fisheries West Coast Region in Long Beach.

Their advocates, however, disagree and are expressing disappointment over the announcement.

“With today’s decision, the U.S. government left the fate of Pacific bluefin tuna to fisheries managers whose poor track record includes a ‘rebuilding’ plan with just a 0.1 percent chance of recovering the population to healthy levels,” said Shana Miller, a tuna expert at The Ocean Foundation. “The U.S. must champion increased protection for Pacific bluefin at the international level, or a commercial fishing moratorium and international trade ban may be the only options left to save this species.”

While there is still some hope that fisheries managers and governing bodies will actually take meaningful action to help Pacific bluefin tuna recover. The Pew Charitable Trusts just called for a two-year moratorium on commercial fishing after the two international bodies responsible for managing this species failed to come up with a recovery plan.

Hopefully in the meantime more awareness about the threat they face from overfishing will encourage more people to act by leaving bluefin tunaoff their plates.

“Pacific bluefin tuna will spiral toward extinction unless we protect them. The Endangered Species Act works, but not when the Trump administration ignores the plight of animals that need help,” said Catherine Kilduff, an attorney with the Center for Biological Diversity. “This disappointing decision makes it even more important for consumers and restaurateurs to boycott bluefin until the species

We invite you to share your opinion whether the Pacific Bluefin Tuna should be given endangered species protection? Please vote and leave your comments at the bottom of this page.