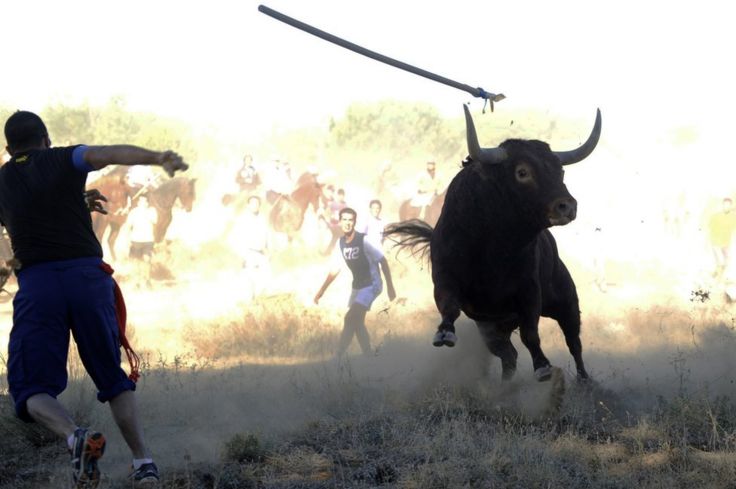 As scores of young men march out of the medieval Castilian town of Tordesillas on 15 September, their iron-tipped lances glinting in the late summer sunshine before they do battle with a 640kg (100st) prize bull, you would be forgiven for thinking it was 1520 and not 2015.

Even for Spain, where the man-against-beast concept dominates the popular festival scene, the Toro de la Vega saga seems especially crude, not to mention dangerous or cruel, depending on your point of view.

Tens of thousands demonstrated in Madrid’s Sol square on Saturday to demand that the event be prohibited.

The Toro de la Vega festival is unique in that after the bull is run through the town, chasing daredevil participants through the streets in a similar fashion to Pamplona’s famous San Fermin event, the beast is not fought by professional matadors in a ring.

Instead, all comers battle for the honour of killing the animal out in the open plain, some on horseback, others on foot. The winner of the tournament trophy is the one who lands the mortal wound on the bull, bringing it to its knees before an accredited expert deals a coup de grace to the animal’s neck.

Supporters of the nearly 500-year-old tradition say it is the purest of battles between man and bull, pointing to strict rules against wounding the animal from the side or attacking in numbers rather than one by one.

But in recent years the annual festival at Tordesillas has become a focus of anti-bullfighting protests by animal rights campaigners, and tensions ran high last September with claims of assaults on both sides – on top of the four participants badly wounded by the bull.

Last year’s winner, Alvaro Martin, said he had received threats on social networks in the days after the festival, and a major security operation will be in force this week to keep hundreds of activists and some 30,000 bullfight supporters apart.

While not supporting violent forms of protest against the event, Pacma, Spain’s biggest animal rights organisation, wants the Toro de la Vega tradition to be stopped.

“It’s an icon of the mistreatment of animals in this country. The image it conveys belongs to the Middle Ages and it in no way reflects today’s society in Spain,” says Silvia Barquero, Pacma’s president.

Ms Barquero’s organisation has presented a 120,000-strong petition to Pedro Sanchez, leader of the opposition socialist PSOE party, asking him to prevent any socialist mayor from authorising such an event.

After last year’s spearing was done outside Tordesillas, Pedro Sanchez pledged on live television to end the Toro de la Vega, theatrically phoning a chat show host who had said he would stop voting PSOE if socialist officials such as the mayor of Tordesillas continued to permit such butchery.

A sign of how politically explosive an issue bullfighting has become arose two days later when Mr Sanchez declared that he would “never take from anyone the enjoyment of watching [star bullfighter] Jose Tomas perform”.

A year on and Tordesillas’s mayor, Jose Antonio Gonzalez Poncela, says he has not heard from his party leader Sanchez, neither to tell him to stop the event nor to offer support in the face of what he considers an intimidation campaign by protesters.

“Tordesillas is a microcosm of Spanish society and there are people who disagree, but locals are united against the threats and attempts to intimidate us,” the mayor said at a talk in Madrid, adding that he was not a bullfighting fan and had never ventured on to the plain during the festival.

This year a host of well-known Spanish musicians and actors signed up to an alternative and bloodless event called Rock in Tordesillas, on the condition that the bull be spared.

But Mr Gonzalez Poncela confirmed that the orders had been signed and that “Rompesuelos” (Groundbreaker) would become the latest beast to be fought in a tradition that even dictator Gen Francisco Franco disliked.

In 1964 Franco sent the Civil Guard to Tordesillas in an attempt to halt that year’s event, but the bull reached the plain and the two lancers deemed victors that day were reportedly locked up and beaten.

Even this year’s champion breeder professes scant enthusiasm for the event.

“There are things I like more and things I like less,” said Luis Guillermo Lopez Olea on learning that his bull Rompesuelos had been bought for €6,000 by the Tordesillas council.

“Everyone has a right to their opinion but my duty is to sell bulls.”

This article was first published by BBC News on 13 Sep 2015.

We invite you to share your opinion whether the Spanish bullfighting tradition should be banned? Please vote and leave your comments at the bottom of this page:

IT IS NOT A TRADITION, IT IS SUFFERING AND MURDER!!!!. MOST DEFINITELY SHOULD BE BANNED!!!. BARBARIC, CRUEL AND TOTALLY NO NEED FOR IT!!!!.

Time to stop this cruelty, and horrible abuse… No way can anyone see this as entertaining! We are past medieval time now!!!

Nothing but an archaic tradition that serves no purpose but demonstrating the brutality that humans are capable of against all living species !

Absolutely bull fighting tradition in Spain, must be banned in this 21st century, it is too late already but it still better than never can be achieved. This babaric traditions as well as so many babaric tradition across the world from remote village to urbans, times to look back to see our ancestors' mistakes, preserved only good traditions and toss a way bad habits, customes, and traditions as well as any brutal religious beliefs. Animals are innocent and defendless like children, the fact that they are incapbable of making income that make us human is to become more generous and… Read more »

Stupid question! Of course it should be banned and Spain should be kicked out of EU

The word tradition might be changed to retarded behavior. Language matters. Tradition simply means ingrained behavior, not necessarily good, as we see with so called traditions that violate other beings autonomy and freedom to live their inherent life span. The sanctity of the word tradition should be examined for allowing certain practices sanctioned by religion and politics to continue if they are not in the best interest of all and especially those with victims. Dialect is used all too frequently to continue the power of those who subject, oppress, dominate. Rodeo's, pig scrambles, Yom Kippur chicken swinging ritual, all violations… Read more »

This is archaic and brutal and has no place in civilized society!

Tradition is NO excuse for animal abuse

Time for all 'traditions' involving animal abuse to get off the planet!!! Animal torturers have been long time regarded as heroes. Now we recognize them as sub human bloodthirsty perverts. CHANGE THE LAWS NOW!!!

All of these should be banned.

It is the small but mighty few that keep this disgusting spectacle alive … we have to drain their pockets somehow – and we must stand with the hundreds of thousands of Spaniards who lobby year after year to ban it andn other blood sports there !

Can't happen soon enough for the bulls & horses who suffer & die not only in Spain but the other countries that still engage in this disgusting, barbaric act. See my film, Part 1 https://vimeo.com/16313658 & Part 2 https://vimeo.com/16310970 Sadly not much has changed since the making of this film, it still has a job to do and it is doing it. Educating those who still are not aware of what exactly goes on before, during and after a 'bullfight' which in itself is a most deceiving word for it as there is no fight involved. Also a gift to… Read more »

there are millions of traditions banned because they are evil and cruel . Time bullfighting joined them in the history books and time the countries doing this vile tradition , evolved .

there are millions of traditions banned because they are evil and cruel . Time bullfighting joined them in the history books and time the countries doing this vile tradition , evolved .

Traditions that cause harm to any living being have no place in our world. I want to believe we have moved on since the stone age or not ???

Ban it! It's cruel and inhumane.

Is your moral compass busted? YES it should be banned!

For sure. IT IS BABARIC

Is that really a question which needs to be asked?! 😮

SICK TWISTED SOCIETY THINKING, SHOWS THE LACK OF TRUE CULTURE AND COMPASSION WITHIN THOSE THAT PROMOTE THIS CRUELTY !

THEY ARE NOT A CULTURE OF VALUES, ONLY OF SADISTIC POWER !

Any tradition or culture where animals are caused untold suffering, fear and death should be banned even culture and tradition have to move on. This is a barbaric and inhumane practice….ban it now for good……….

no brainer alert!!! of course it should be banned!

We live in an age where Man's cumulative impact on the environment is causing a well-documented extinction level event. Yet this phenomenon is scoffed at as a "hoax" or yet another attempt by the political left to denigrate Capitalism. If we were all willing to truly listen, the damage being wrought could be slowed, stopped and even reversed. But few are willing. Traditions (in quotes) such as bullfighting, are among the worst of our behaviors, like the corraling and slaughter of pilot whales in the Faroe Islands, and though distinguished as a challenge of a young man's courage, in reality… Read more »

Of course it should. Be banned

These animal abusers should be jailed.