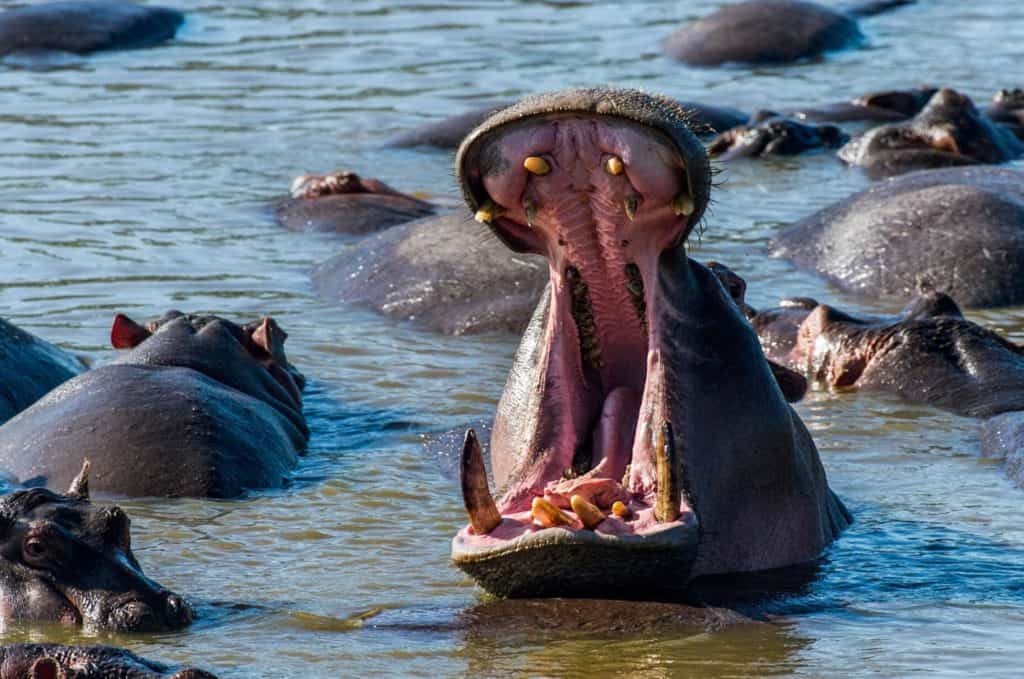 Tanzania is auctioning off nearly four tons of hippopotamus teeth today, raising concerns among conservationists that legally purchased teeth may end up on the black market, where demand for hippo “ivory” is already threatening their long-term survival.

The teeth are from hippos that died naturally or were killed because they had dangerous encounters with humans, said James Wakibara, the head of the Tanzania Wildlife Authority, which is holding the auction.

Another official added that some of the teeth were also confiscated from poachers and smugglers.

The money raised from the auction will go toward conservation efforts, Wakibara said.

The vast majority of legally traded hippo teeth typically end up in Hong Kong or passed through Hong Kong on their way to China and the U.S., according to a 2017 study by researchers at the University of Hong Kong. Hippo teeth are carved into sculptures, figurines, trinkets, and other ornaments, and are considered a luxury good. More than three-fourths of Hong Kong’s reported imports come from just two countries—Uganda and Tanzania.

That figure only reflects reported trade, which has been criticized as weakly regulated. The 2017 study found far more hippo teeth being brought into Hong Kong than were reported leaving African countries. This discrepancy, the paper says, undermines regulations designed to protect hippos and potentially puts their populations’ stability at risk.

Unregulated and illegal hunting and trade of hippo teeth—along with habitat loss, climate change, and run-ins with humans—are considered the greatest threats to hippos, which are listed as “vulnerable to extinction” by the International Union for Conservation of Nature. At last count, in 2001, Tanzania had about 20,000 hippos. Continent-wide there were no more than 130,000.

“This, like many other hippo population estimates, is in need of updating—particularly in light of the reported trade discrepancies highlighted in our paper,” said co-author Alexandra Andersson, a wildlife trade doctoral candidate. “Since trade and policy decisions are based on such information, it is crucial that data on hippo populations is accurate and current.”

To protect its hippos, since 2001 Tanzania has limited the export of teeth to no more than about 23,300 pounds a year, but according to the 2017 study, co-written by the University of Hong Kong’s Luke Gibson, it appears that no one knows exactly how much is leaving the country, which accounts for more than a third of the hippo ivory imported by Hong Kong.

“Since 2004, Tanzanian authorities have declared just one shipment of hippo teeth to Hong Kong—though records from Hong Kong indicate others,” the study notes. Hong Kong’s records indicate imports of 3,500 to 14,300 pounds of hippo teeth from Tanzania almost every year.

Andersson and others worry that Tanzania’s hippo teeth auction today could have the same effects as two elephant ivory auctions in 1999 and 2008. These one-off sales occurred after the international trade in ivory was banned, and at least one study suggests that they stimulated demand for ivory and provided cover for illegal ivory to be laundered into the legal market.

“Hippo teeth, once carved, are potentially indistinguishable from elephant tusks by a consumer,” says Jeff Chrisfield, chief operating officer of the African Wildlife Foundation, a conservation organization. “With the world beginning to rally around elephant conservation, there is a real risk that poaching and trafficking could shift to the ivory from hippos.” (Read more: “Fighting the Underground Trade in Hippo Teeth.”)

Wakibara, of the Tanzania Wildlife Authority, said such auctions have been held before, and “there is no reason to worry that this trophy auctioning will be a precursor for illegal exports.” Representatives from Tanzania’s CITES authority, which is in charge of issuing permits for exports of hippo teeth, did not respond to requests for comment.

Andersson, on the other hand said that it’s a real risk. In the future, she said in an email, several steps must be taken in order to control demand for teeth and prevent the poaching and smuggling of hippos and their parts. Andersson emphasized the need for updated estimates of hippo numbers. Once that’s complete, scientists must analyze those numbers to determine whether hippo populations can sustain a trade in their teeth, especially in the face of the other threats hippos face.

If it’s determined that trade can continue without serious threat to hippo numbers, precise record-keeping is a must, she said: “If there are major discrepancies in reported trade volumes, like the ones seen in hippo teeth trade between Tanzania and Hong Kong for many decades, this must be investigated.”

More work is needed on the Hong Kong side as well, Andersson argued. A survey to count the number of hippo teeth products circulating in Hong Kong will help prevent illegal hippo teeth from entering the market. She also suggested that there be a registration and licensing process for hippo teeth, as some countries do for other highly valuable, often illegally traded wildlife products, such as ivory in Japan and tiger parts in Indonesia.

Lastly, she added, Tanzanian authorities should be given more support. Funding, training, equipment, staff, and anti-corruption measures will all go a long way in preventing the poaching of hippos and smuggling of their teeth.

This article was first published by National Geographic on 29 Jan 2018.

We invite you to share your opinion whether the trafficking of Hippo Teeth should be banned? Please vote and leave your comments at the bottom of this page.