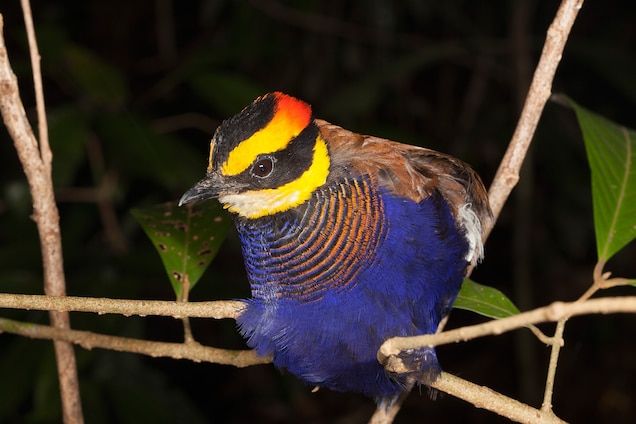 Pittas are a birdwatcher’s prize. Called “jewels of the forest” for their glorious plumage, these shy, secretive birds are almost impossible to spot in the wild.

But head to Indonesia’s massive wild bird markets, and they’re a common sight, according to a new report by TRAFFIC and Birdtour Asia. That’s despite a law banning hunting and trade of all pitta species.

Researchers found 81 pittas in seven of the eight markets they visited in Java in July 2014 and in June 2015. The Javan banded pitta, which has yellow and blackish-blue barring on its chest and a striking black mask around its eyes, was seen most often.

But they also encountered several other trafficked species, including one Malayan banded pitta, normally found only in Sumatra, Peninsular Malaysia, and Thailand.

How well or badly pittas are doing in the wild is unknown, although they’re not thought to be abundant anywhere. Since pittas are so hard to find, the fact that they’re seen often in bird markets demonstrates a hard truth: When it comes to birds, no species is safe.

From TRAFFIC’s Southeast Asia office in Malaysia, Chris Shepherd, the co-author of the report, discusses how what’s happening to birds in Southeast Asia is one of the greatest conservation crises ever and what should be done about it in Indonesia in particular.

The cage bird trade in Indonesia is massive.It’s almost unbelievable.While a relatively small number of species are captive bred, millions of birds are captured from the wild for the trade each year.Its impact is terrifying. Many species really are on the doorstep of extinction, with some species of songbirds numbering fewer than 50 individuals left.

In 2015 TRAFFIC, Wildlife Reserves Singapore, and others came together in Singapore at the first Asian Song Bird Trade Crisis Summit, to determine which birds are in trouble and to prioritize species of concern and actions.

Unfortunately, for many species, we simply don’t know yet, and, sadly, for some it may be too late before we really do know what the situation is. The bird trade in Southeast Asia is one of the greatest conservation crises ever, and a multitude of species will vanish if something isn’t done now.

Why focus on pittas?

It’s extremely important to look out for the species that no one else is looking at.

Many bird species are in trouble, and we usually find out about it only when it’sa crisis.That’s why we’re doing studies of Indonesia’s large markets and trying to get a full inventory of species traded. It’s highlighting the scale of the trade and also the fact that it’s illegal.Shockingly, we’re finding tens of thousands of birds in single days.Among these are many species and species groups that have not been studied before, like the pittas.

Pittas are a brilliantly colored group of ground-dwelling birds found in rain forests.Southeast Asia is home to the bulk of pitta species, and Indonesia has many found nowhere else.They’re a big draw and could bring in dollars from foreign birdwatchers, which in turn could help local communities and encourage protection of wild bird life.

What should happen next?

The pitta trade is yet one more example of how open and blatant the illegal trade is.As a group of species, pittas are easy to recognize. Their brilliant colors jump out of the cages at you. Enforcement officials could easily recognize these species and take action against the sellers.

We’re calling on the Indonesian government to shut down these illegal bird markets. The strong laws already in hand need to be put into play.

This article was first published by National Geographic on 25 Feb 2016. Lead Image: A Malayan banded pitta sits in Sumatra. These birds are nearly impossible to spot in the wild but are a common sight at Indonesia’s bird markets. Photograph by Nicolas Cegalerba, Biosphoto, Corbis.

We invite you to share your opinion whether the trafficking of wild birds should be banned? Please vote and leave your comments at the bottom of this page: