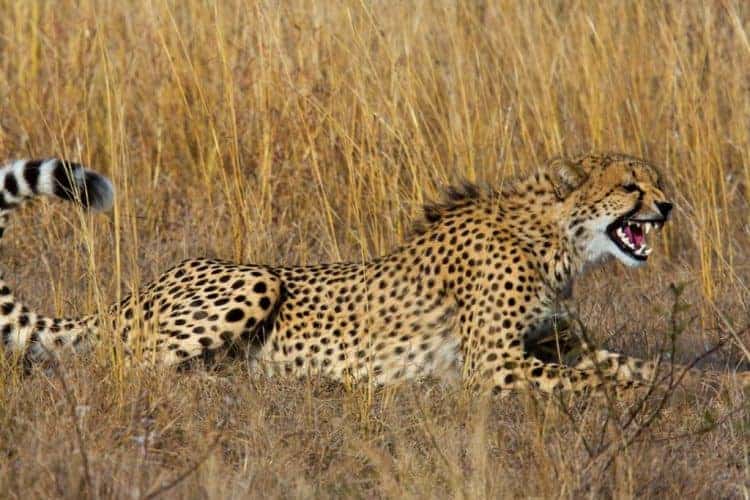 It’s easy to find images on social media of pet owners in Gulf countries flaunting their exotic animals—but in the future there likely won’t be as many posted in the United Arab Emirates (UAE). The country has banned residents from owning cheetahs, lions, and other “dangerous” wild animals as domestic pets.

Enacted last month, the new law prohibits, among other things, possession of exotic creatures by any entity other than zoos, wildlife parks, circuses, and breeding and research centers, Gulf News reported Tuesday in Dubai. Anyone caught violating the ban could face a $190,000 fine and prison time.

Exotic pets have long been considered a status symbol across the Middle East, dating back to when Egyptian and Persian royalty kept big cats. But nowadays increased threats to wild populations, such as habitat loss and fragmentation, and a growing awareness of the harms of keeping wild animals in captivity have cast a different light on the practice.

“This shows that governments can take bold steps to stop the exotic pet trade,” says Adam Roberts, CEO of Born Free USA, an organization that fights to end the captivity of wild animals. “There’s an image of big cats living in opulence, from the pictures we’ve seen on social media that clearly does happen—but that’s not always how it is for wild animals.”

Besides, what we consider opulent isn’t always what’s good for the animals, advocates say. Take cheetahs, for example, likely the biggest winner of this new law because of their relative popularity as pets.

Many owners end up feeding them prime cuts of meat, says Sarah Durant of the Zoological Society of London and National Geographic’s Big Cats Initiative. But what would make a luxurious meal for carnivorous humans is not a healthy one for cheetahs, whose diet in the wild is quite different.

“This law first aims to ensure animal welfare for the animals themselves,” Al Hashmi says. According to Roberts, it likely will also have a beneficial effect on the conservation of threatened species, especially cheetahs, which teeter on the brink of extinction.

They’re trafficked from their native countries in Africa and sold for thousands of dollars to owners in Arab countries.The Namibia-based Cheetah Conservation Fund has documented 250 cases involving a thousand illegally traded cheetahs since 2005. That’s a significant number, given that, as a recent survey indicates, only about 7,100 remain in the wild.

“The cheetah is more beautiful in the wild, not in a home,” Al Hashmi says. “We tried to show people the impact of having cheetahs as exotic pets—diseases, dangerous behavior. But even if a cheetah doesn’t harm you, you could harm it.”

Roberts would like other countries to take action similar to the UAE’s, particularly nations in the Arabian Peninsula, as well as the European Union and the U.S., two of the largest consumers of exotic pets.

In the U.S., millions of wild animals—lions, monkeys, venomous snakes—are kept in basements, backyards, and garages. Even though it’s generally illegal to import animals that are threatened with extinction for commercial purposes, some are bred in captivity for the pet trade. According to Roberts, there are likely more big cats in private hands in the U.S. than in the wild globally.

This article was first published by National Geographic on 06 Jan 2017.

We invite you to share your opinion whether the UAE’s exotic pet ban should be adopted by other countries? Please vote and leave your comments at the bottom of this page: