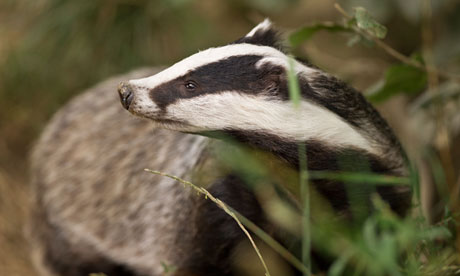 Secret government trials of gassing badger setts have been underway since the summer of 2013, according to documents released under freedom of information rules on Thursday. The tests, at an undisclosed location, are examining how the poisons carbon monoxide and nitrogen oxide flow through complex badger setts. No animals or active badger setts have so far been involved in the tests, which are ongoing and have no end date.

The research follows serious failings in the farmer-led badger culls, which involve night-time shooting of free-running badgers. The culls are intended to curb the rise of tuberculosis in cattle in England, which saw more than 26,000 cattle slaughtered in 2013. But the pilot culls failed to kill the target numbers of badgers and was not judged sufficiently humane by an independent panel, causing a planned wider rollout to be abandoned.

Gassing badgers with cyanide was outlawed in England as inhumane in 1982, but some farmers have called for gassing to return, as did Princess Anne in April. There have also been suggestions that some illegal gassing using vehicle exhausts already takes place.

The Department of Environment, Food and Rural Affairs (Defra) response to the freedom of information request stated the trials aimed to “determine whether any available mechanisms have the potential to achieve humane and effective outcomes in real sett situations”.

In October, Owen Paterson told parliament: “Gassing is under consideration, but we will not use it unless it is proven to be safe, humane and effective”.

However, a Defra report in 2005 concluded that gassing “cannot be reliably expected to kill all the animals in a complex burrow system”. It also found that, even including carbon monoxide, “there are no currently available poisons that would be effective without causing deaths that would be considered markedly inhumane and/or significant risks to non-target wildlife”.

Until now Defra was understood to be looking at previous research on gassing but the revelation of active research has horrified animal rights campaigners. “Gassing has already been shown by research to not be humane,” said veterinarian Mark Jones, executive director of Humane Society International/UK.

He said sub-lethal doses caused suffering to the animals and that it had been shown to be less effective on badger cubs: “So you could end up with orphan badgers with all the welfare concerns that brings.” It could kill other animals that use badger setts, he added, such as rabbits, foxes, otters and even endangered reptiles like the sand lizards.

“We need Defra to come clean on why it is spending that public money on research into badger culling methods which have already been shown to be indiscriminate, inhumane and ineffective, and are in any event prohibited under international agreements,” Jones said.

But Minette Batters, deputy president of the National Farmers Union, said: “The government’s TB eradication strategy gives a clear commitment to tackling the disease in wildlife, so the NFU welcomes its decision to carry out research into methods of doing this as possible tools to be used in the battle to combat bovine TB. The disease continues to take a devastating toll on farming families both emotionally and economically.”

Badger expert Prof Rosie Woodroffe, at the Institute of Zoology in London, said: “The problem with gassing seemed to be that badger sets are built to hold warm air in and keep cold drafts out, so it was very difficult to achieve a lethal concentration of gas. And sub-lethal concentrations of gas were inhumane – that’s why ministers banned gassing in 1982.”

A Defra spokesman said: “Initial investigations into the use of gas as a potential culling method are taking place as set out in the 25-year strategy to free England of bovine TB, which includes plans for more sophisticated TB testing, developing cattle and oral badger vaccines, tighter cattle movement controls, badger vaccination in the buffer zone and badger culling in areas where disease is widespread.”

The eradication strategy also states: “Research into the application of fertility control [of badgers] using an injectable contraceptive is ongoing.” Defra is funding three current studies on contraceptive treatment for badgers, including one on the potential to develop an oral contraceptive.

Many scientists and campaigners have condemned the badger cull as a waste of time and money and argue that even stricter controls on cattle movements, better TB testing and vaccination are the only was to control the disease. In Wales, where badger culling was rejected in favour of the alternatives, TB in cattle is falling.

We invite you to register your opinion, whether the UK Government should be allowed to gas badgers or not.  Please vote and also leave your comments at the bottom of this page.

The editorial content of this article was written by Damian Carrington for The Guardian.