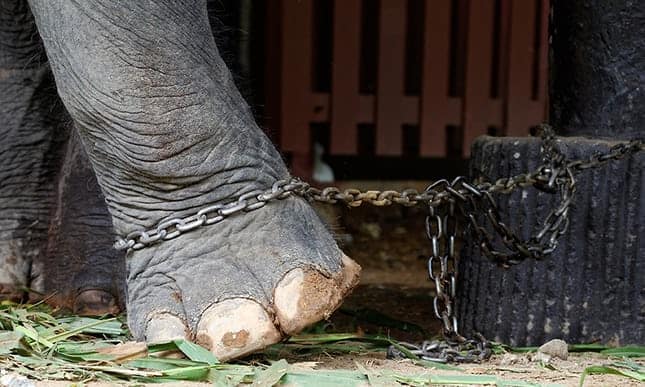 Thousands of elephants being used for entertainment across Asia are kept in cruel, abusive conditions fuelled by the growing tourism industry, World Animal Protection has found.

Three out of four elephants surveyed in south-east Asia’s popular tourist destinations are living in harsh conditions where they are being used for rides, with mostly steel or wooden saddles, and tied in chains less than three metres long.

The scale of suffering experienced by elephants is “severe”, according to the animal rights NGO which assessed almost 3,000 elephants living in 220 venues in Thailand, Laos, Cambodia, Nepal and Sri Lanka, and India between mid 2014 and late 2016.

At least 77% of the captive elephants surveyed in the report, which was released on 6 July, are chained day and night when not being used for entertainment purposes and experienced very little social interaction with other elephants. The animals are fed poor diets, have no access to proper veterinary care and are often exposed to stressful environments with loud music and a large number of tourists.

Elephants used for entertainment in Thailand in 2016.

These conditions go against elephants’ most basic needs. Elephants are intelligent, socially developed animals, which form complex hierarchies within herds. But in captivity elephants are forced to unnaturally submit to humans; they have been found to live shorter lives, experience behavioural problems, are more likely to develop chronic diseases and are less likely to reproduce.

The captive elephant population is now thought to make up one-quarter to one-third of the remaining elephants in the region.

Despite conservation efforts, Thailand has seen a 30% increase in elephant entertainment venues – from circus performances to riding or bathing with elephants. As many as 40% of tourists from the top 10 countries visiting Thailand said they had been on or were planning to do an elephant ride, which translates as a demand for around 12.8 million elephant rides in the country, according to the report.

This coincides with the growing number of foreign visitors to Thailand which reached 32.6 million last year – a rise of 9% from 2015.

Elephant tourism remains popular because it can be “a hidden form of cruelty”, said Chiara Vitali, a wildlife expert at World Animal Protection. The process of the crush “will happen before any tourist sees an elephant, so they might see an animal that’s quite chilled out – but it had that beaten into it when it was an infant”, she said.

The organisation believes the best place for captive elephants are genuine sanctuaries, where the animals can roam free, bond and have their herd structure – and where tourists can see the elephants in a respectful way.

“Venues that offer tourists a chance to watch elephants in genuine sanctuaries are beacons of hope that can encourage the urgently needed shift in the captive elephant tourism industry.”

Another report released on 4 July found an obscure Chinese town to be at the centre of an ivory smuggling trade network, exposing weaknesses in China’s domestic ivory ban which came into place in March 2017.

The Environmental Investigation Agency spent three years investigating the town of Shuidong, and found it to be home to a network of ivory trafficking syndicates reaching east and west Africa, according to the EIA. The group’s influence extended to the poaching hotspots of Tanzania and Mozambique.

Researchers say the smuggling group was still active as of late June 2017, describing Shuidong as the world’s largest hub for ivory trafficking.

“What EIA discovered in Shuidong … clearly shows transnational criminal networks are operating with near-total impunity,” said Mary Rice, EIA executive director. “It is vital that enforcement agencies in Africa and China put these criminals out of business immediately.”

This article was first published by The Guardian on 06 Jul 2017.

We invite you to share your opinion whether the use of elephants for “entertainment” should be banned? Please vote and leave your comments at the bottom of this page.