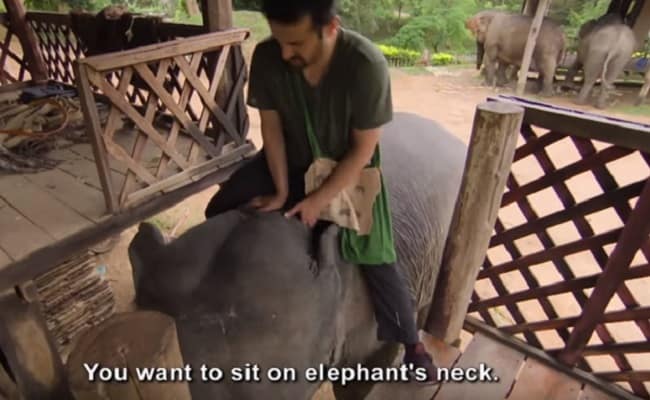 During the episode of “The Amazing Race” that aired on CBS April 24, contestants had to ride Asian elephants across a river in Laos to reach their next destination.

“The Elephant Conservation Centre is funded by ecotourism, providing a safe haven and breeding program to ensure the quality of life and survival of these gentle giants,” host Phil Keoghan tells the show’s nearly 5 million viewers at the beginning of this segment.

In its 2017 report Taken for a Ride, the culmination of a two-year study of the welfare of elephants in Asia, World Animal Protection (WAP) does include the Elephant Conservation Centre on its list of the venues with the best conditions for these animals. However, the report notes that the center offers “no elephant rides.”

Many reviews on TripAdvisor, which in 2016 stopped booking tourist attractions that allow people to come into physical contact with captive wild animals, praise the Elephant Conservation Centre for not allowing visitors to ride the elephants.

So what’s going on in this episode of “The Amazing Race”?

Well, if you look at the blue shirts the elephant handlers are wearing as well as a map the show displays, you’ll see they say Elephant Village, not Elephant Conservation Centre, which is an entirely different venue.

Elephant Village does offer the elephant rides. It should be noted that, unlike the Elephant Conservation Centre, Elephant Village is not included in the WIP’s list of the most humane venues and it is not on TripAdvisor.

So not only is this popular show promoting elephant riding, it’s apparently deceiving its viewers into thinking these elephants live in a place where their quality of life is being ensured, as the show’s host claims.

“At a time when more and more travelers and tour operators are starting to question the ethics of riding elephants, as well as the methods used to train them, it is simply horrific and unacceptable that The Amazing Race decided to portray it in a fun and entertaining manner,” writes Wendy Marcus-Minovitz, of the nonprofit Elephant Guardians of Los Angeles, in the Care2 petition she started.

In the wild, of course, elephants don’t naturally let humans climb up and ride them. On “The Amazing Race”, contestants had to use voice commands to communicate with the elephants—like “sohng” to get them to lift their knees so the contestants could climb onto the back of their necks, and “map” for the elephants to sit down.

“There’s no whipping, there’s no hitting or kicking, it’s just voice commands,” says one of the contestants. How does he think the elephants learned those commands?

While some captive elephants are trained using positive reinforcement, it can be a brutal process for others. In some cases, trainers literally beat the elephants into submission.

Renowned elephant activist Lek Chailert told Care2′s Judy Molland that baby elephants taken away from their herds in some southeastern Asia countries have their spirits broken inside what’s called a “crush box,” a log cage in which they are beaten repeatedly.

The WIP report recommends that to improve the welfare of elephants in Asia, tourist demand should be channeled away from “the worst activities such as elephant shows and rides” and instead focus on humane alternatives.

How shameful that instead of taking this advice and raising the awareness of its millions of viewers, “The Amazing Race” chose to deceptively promote riding elephants. There’s absolutely nothing amazing about that.

We invite you to share your opinion whether the use of elephants for tourist entertainment should be banned? Please vote and leave your comments at the bottom of this page.