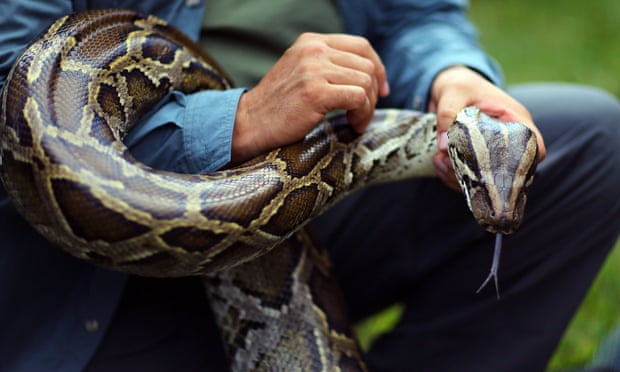 From Balenciaga’s £845-a-pair high-top black python trainers for men to a full-length trenchcoat sported by Rihanna, snakeskin – or python in particular – is having something of a fashion moment.

Demand for the luxury patterned leather is riding so high that Kering – the company behind big brands including Gucci, Saint Laurent and Alexander McQueen – has built its own python farm.

The Paris-based company has set up a farm in Thailand, complete with breeding stock, and the snakes will be raised in “the best conditions for animals, farmers and the ecosystem” before they are turned into shoes, bags and belts.

Kering said it was investing in the farm to provide a sustainable source of skins. The project comes amid growing pressure from campaigners over the use of exotic animal skins for fashion.

Animal rights group Peta recently revealed it had bought shares in LVMH, the fashion house which owns Louis Vuitton, Dior and Givenchy, in an effort to fight what it sees as animal rights abuses. Peta has previously taken stakes in Prada and Hermes as part of its campaign against the use of exotic skins including alligator and crocodile.

Kering said its farm would begin producing adult skins in 2018, with provision of “a significant number” expected by 2020.

Commercial farms already exist in south-east Asia and China, but the system is widely used to “launder” illegally caught wild pythons – to the extent that most supposedly farmed python skin from Cambodia, Indonesia and Laos is considered suspect.

In the past, farming of the reticulated python and Burmese python – two of the world’s largest snakes – has beenregarded as uneconomic, because the snakes take about three years to mature and are difficult to care for and breed in captivity.

Marie-Claire Daveu, chief sustainability officer for Kering, said: “This is a long-term commitment to developing sustainable and responsible sourcing of Kering’s python skins – it takes time to ensure this is done to the highest standards.” The farm, she said, was intended to secure the supply of skins and show how farming could be done sustainably and humanely.

Kering said it began looking at alternative ways to source precious skins about three years ago as part of its involvement in the Python Conservation Partnership, a body which unveiled a $1bn (£795m) illegal annual trade in the snake’s skin.

The extent of the trade was highlighted last year when the Chinese government recovered 68,000 smuggled python skins worth $48m – or about £560 each – – thought to have come from Vietnam, according to reports in local state media.

About 500,000 skins are now imported legally from south-east Asia into Europe each year, where they are turned into designer accessories. That total is up 40% on a decade ago, according to a PCP report.

Kering said it did not expect to stop sourcing skins from the wild under the convention on international trade in endangered species (Cites) scheme. The legal trade in wild skins, it said, provides jobs for local communities and can help support the protection of the reptiles in their own habitat.

“We don’t want to remove precious skins [from our products] but we want to be sure that skin doesn’t destroy the species when they come from the wild and if it comes from farming that it has the best conditions for animals, farmers and the ecosystem,” said Daveu.

The python farm is part of Kering’s efforts to improve its sustainability and environmental standards. The luxury fashion house is asking all its brands to use more sustainable raw materials and fabrics such as organic cotton and merino wool produced on sustainable farms in New Zealand.

All the group’s brands, which include Stella McCartney and Balenciaga, are developing action plans and 10% of their chief executives’ annual bonus will be dependent on them meeting sustainability promises.

The company has been piloting a number of other ideas, including using only ethically-mined gold and heavy-metal-free leather tanning, and is now aiming to use more of these materials.

This article was first published by The Guardian on 25 Jan 2017.

We invite you to share your opinion whether the use of exotic animal skins for fashion should be banned? Please vote and leave your comments at the bottom of this page: