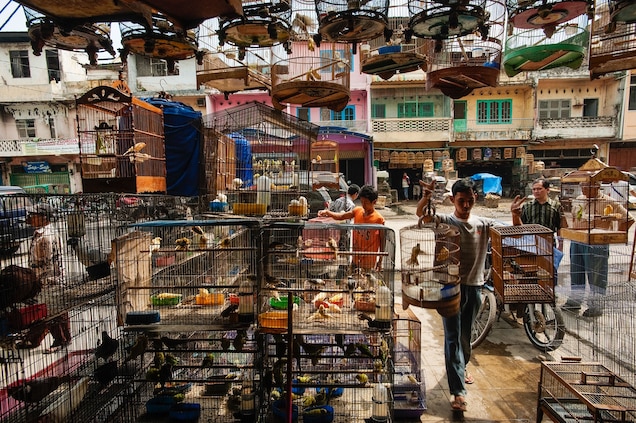 A cacophony of birdsong rings out from hundreds of wire and bamboo cages strung along awnings and crisscrossing the ceilings of cramped open-air stalls at Pramuka, Indonesia’s biggest bird market, in the capital, Jakarta.

Thousands of wild birds—ranging from tiny brown finches and brilliant rainbow lorikeets to small-bodied, large-eyed owls—will be sold as pets to local collectors. Most of the birds were trapped illegally.

A new report from researchers with TRAFFIC, the wildlife trade monitoring organization, highlights the vast scale of Indonesia’s bird trade.

During three days in 2014, researchers counted more than 19,000 birds for sale in Pramuka and two other bird markets in Jakarta, representing more than 200 species. These markets are among the largest in Southeast Asia.

Prices ranged from 43 cents for a scaly-breasted munia, also known as a spice finch, to more than $4,200 for a scarlet macaw, the researchers found.

Among the most numerous birds they documented were Oriental white-eyes (small, yellow-green birds with rings of white around their eyes), Javan mynas, zebra doves, and greater green leafbirds, all native to Indonesia.

“We knew the scale of the trade through Jakarta’s bird markets was large,” said TRAFFIC spokesman Richard Thomas in an email. “But this report has highlighted just how immense it is.”

Birds are the most popular pet in Indonesia. More than a fifth of households have them, which (conservatively) comes out to around 2.6 million birds in captivity in the five biggest cities, according to a 2005 study.

As a popular Javan saying goes, a man is considered to be a real man if he has a house, a wife, a horse, a keris (dagger), and a bird.

Plummeting songbird populations in the Mediterranean and in the United States have attracted attention in recent years, but now focus is also turning to Southeast Asia.

Indonesia is home to more threatened bird species (131) than any country besides Brazil and is a hub for the global illegal bird trade.

A man is considered to be a real man if he has a house, a wife, a horse, a keris (dagger), and a bird.

Several of the birds the researchers identified are listed as threatened on the International Union for Conservation of Nature’s (IUCN) Red List—a widely accepted international list of the conservation status of species—including the Bali myna, black-winged myna and the rufous-fronted laughing thrush.

Some are on Indonesia’s own protected birds list, which also means they can’t be trapped under any circumstances. Many more species, experts believe, should be on the list but aren’t because it hasn’t been updated since its creation in 1990.

With the country’s open-air wildlife markets brimming with native bird species, conservationists are increasingly worried about the impact of the booming trade in illegally trapped birds and protected species on local and regional populations.

But nearly non-existent law enforcement enables the illegal trade to thrive and grow, according to an 2015 analysis by international law firm DLA Piper.

Most sellers at Pramuka and the other markets have no paperwork, says Burton Harris, who published a study while at Princeton earlier this year to identify declining species using data from Indonesia’s bird markets.

In addition to threats from the pet trade, songbirds, which make up the majority of the birds in the markets, have seen their habitats destroyed by clear-cutting for lumber, as well as for palm oil and rubber plantations.

“There’s no doubt that habitat loss is the overarching threat facing Asia’s songbirds as a whole,” said Richard Thomas, a spokesman for TRAFFIC. “However, some species are getting an extra whammy through relentless trapping because they’re particularly attractive or sing well or because they’re rare.”

Some favored species, such as the crow and the black-naped oriole, are considered good-luck charms.

We knew the trade through Jakarta’s bird markets was large. But this report has highlighted just how immense it is.

Others, like the critically endangered Bali myna—nearly all white with a fluffy crest, black tail tip, and striking blue coloration around the eye—are status symbols. Selling for upwards of $500 each in a country where the average monthly middle-class income is between $200 and $670, a Bali myna makes its owner proud.

The TRAFFIC researchers found 16 Bali mynas for sale. It’s estimated that there are now no more than 115 of them in the wild.

While keeping birds is an entrenched part of Indonesian home life, it’s also increasingly a part of public culture too, as bird singing competitions have exploded in popularity.

The TRAFFIC researchers made no mention of seeing birds with leg bands, which would show that they were born in captivity rather than taken, fully grown, from the wild. A breeder can slip a band over a bird’s foot only when it’s young enough for the bones to still be pliable.

While some research suggests that captive-breeding programs in Indonesia could reduce demand for wild-caught birds, the TRAFFIC report recommends against expanding them until Indonesian authorities demonstrate they can adequately enforce breeding regulations and prevent breeding stock from being illegally taken from the wild.

We invite you to share your opinion whether the wild bird trade in Southeast Asia should be banned? Please vote and leave your comments at the bottom of this page: