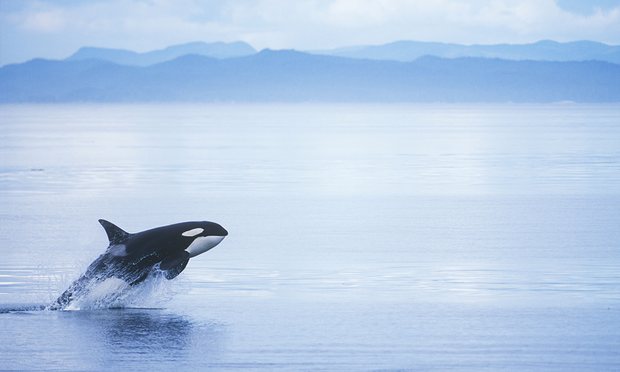 On one shore there are snow-capped mountains. On the other side loom towering skyscrapers. These churning waters off the coast of Vancouver are marked by a constant flow of ferries and containers ships – but they are also home to 80 or so orcas.

Known as the southern resident killer whales the group has long had a fraught relationship with the urban sprawl they live alongside, leaving them on the knife’s edge of extinction.

In the late 1960s and early 70s, dozens were captured and sold to aquariums and theme parks around the world. Those who remained were exposed to runoff chemicals used in local industry, making them some of the world’s most contaminated marine mammals.

But now the orcas of the Salish sea face what conservationists say is their biggest threat to date: an expansion proposal for a pipeline that would snake from Alberta to the Pacific coast.

The proposal – which still needs the approval of the federal government, led by Justin Trudeau – would expand an existing pipeline to lay nearly 1,000km of new pipeline from Alberta to Vancouver’s coastline. Oil tanker and barge traffic in the region would soar nearly sevenfold, to as many as 408 tankers a year.

Conservationists warn that the spike in tanker traffic would be disastrous for the resident orca whales – a genetically unique population that is already classified as endangered in both Canada and the US.

“The approval of the project is also the approval of the extinction of the population,” said Ross Dixon of the Raincoast Conservation Foundation. “No one is disputing it. Nobody is saying that’s not accurate. It’s been accepted.”

In May, Canada’s energy regulator wrapped up two years of review into the Trans Mountain proposal, recommending that the federal government approve the project. The approval was conditional, subject to 157 conditions that include 49 environmental requirements. The regulator also noted the project “is likely to result in significant adverse effects to the southern resident killer whale”.

Trudeau’s cabinet has until 19 December to make its final decision.

Analysts have long speculated that the approval of the pipeline is imminent. “The choice between pipelines and wind turbines is a false one,” Trudeau told attendees at a Vancouver conference on clean technology in March. “We need both to reach our goal, and as we continue to ensure there is a market for our natural resources, our deepening commitment to a cleaner future will be a valuable advantage.”

Trudeau has faced immense pressure from Alberta – where sagging oil prices have sent unemployment soaring to around 8.5% – to approve a pipeline, but promises by Donald Trump to resurrect plans for the Keystone XL pipeline could alleviate some of this pressure.

Many are not taking any chances. The Raincoast Conservation Foundation has joined forces with several other organisations to launch a legal challenge against the energy regulator’s approval of the project, arguing that it failed to take into account the impact on the orca whales and their habitat. The groups are currently waiting to hear whether their application for judicial review, filed in June, will be given the go ahead by the court.

The anticipated increase in tanker traffic will heighten the physical and acoustic disturbances in the water, said Misty MacDuffee of Raincoast Conservation Foundation. “The noise of the propeller and the engine emits at a frequency that can mask the communication of the whales,” she said. “And the overall traffic combines to create sort of a din … so it reduces the actual space over which the whale can hear and be heard by other whales.”

Climate change has steadily diminished the availability of Chinook salmon, the whales’ main food source. Drone research has revealed whales with altered body shapes and lacking fat deposits, suggesting they are starving. “You can visibly actually see the ribs on some of these whales,” said MacDuffee.

If tanker traffic increases, the whales will not simply move to another area. “That critical habitat is not just a space on the map. It has these acoustic components, food supply components and water quality components.”

The fate of the orcas is just one facet of the broad opposition the project is facing. More than 20 municipalities and 17 First Nations communities have come out against the proposal while hundreds of youth marched in Ottawa last month to urge the government to shelve the proposal. Thousands more are expected to turn out for a protest march in Vancouver this Saturday.

The existing pipeline – which began operating in 1953 – passes near several schools, at one site running under a school playground, said Karen Wristen of Living Oceans.

It was concerns over this trajectory that launched 92-year-old Elsie Dean into action. “It comes right through our community,” said Dean, pointing to the pipeline’s route through her home of Burnaby, a city of some 220,000 people in British Columbia.

Since 1961, the pipeline system being eyed for expansion has reported approximately 82 spills to the country’s energy regulator, she noted. “It just seems rather insane to consider putting this amount of bitumen in a community of people.” 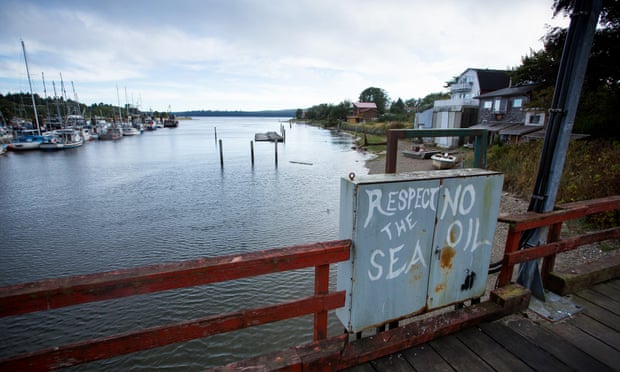 Those opposed to the pipeline say increased oil tanker traffic will hamper the whales’ ability to catch food. Photograph: Bloomberg/Bloomberg via Getty Images

Dean helped launch Broke, or Burnaby Residents Opposed to Kinder Morgan Expansion, four years ago in an effort to steer Canada – whose greenhouse gas emissions rank among the highest per capita in the OECD – away from fossil fuels and towards meaningful efforts to tackle climate change. “We know that if we don’t cut back on fossil fuels, the future generation or certainly my grandchildren will be affected adversely by climate change.”

One First Nations community has countered the proposal with a demonstration of the alternative. The Tsleil-Waututh Nation, which sits directly across an inlet from the existing Kinder Morgan tanker terminal, recently launched a fundraising campaign to expand the community’s commitment to solar energy. “It’s a poetic way to illustrate the choices before us,” said Charlene Aleck, a councillor with the community.

The Kinder Morgan project was analysed through the same lens as all others that come through the territory, said Aleck. “Is it feasible, is it something good for the water, land and air?” The community of 500 people was unanimous in its opposition. “It didn’t even pass the lowest entry form of how we would run business on our land.”

Earlier this month, Trudeau announced C$1.5bn in funding to improve response measures. The move was widely seen as an attempt to quell some of the opposition to the proposed pipeline.

Aleck welcomed the funding as a way to address the issues arising from the industry already in operation in the region. “But the best way to mitigate an oil spill is not to approve the Kinder Morgan expansion,” she added.

When queried on the opposition facing the proposal, Kinder Morgan pointed to a series of links on their website highlighting the company’s funding of orca research and its efforts to engage communities affected by the pipeline.

The project has received 41 letters of support from Aboriginal groups located along the pipeline and marine corridor in Alberta and British Columbia, said the company. More than C$13m in funding had been provided to some 98 communities who wanted to learn more about the project, it added.

The pipeline does not run under any buildings, the company noted. “Living or being active near our pipeline does not pose any health risk.” Where the pipeline runs near schools, it said, “we are open to working with individual schools or districts to fully support their safety efforts and ensure their emergency response plans and ours are coordinated.”

If the project is approved, the company said it would invest more than C$150m in marine spill response in the region. “The investment will fund five new response bases, about 115 new employees and approximately 26 new vessels at strategic locations along BC’s southern shipping lane,” the company said.

The millions in funding does little to address what seems to be a certainty of the project – the risk posed to the resident orca whales, said Dixon of the Raincoast Conservation Foundation. “If this population goes extinct, it’s gone for good,” he said. “They’re part of our identity, they’re part of the place in which we live. If we lose them, we lose a part of ourselves.”

This article was first published by The Guardian on 16 Nov 2016.

We invite you to share your opinion whether this Canadian pipeline project should be scrapped to save killer whales? Please vote and leave your comments at the bottom of this page:

PS. Some further reading on green-energy.

Being a Canadian and someone who has spoke up against this pipeline now for several years. It would be the extinction of the orca in this area, and because this area is so dangerous to manoeuvre in because of the shallow depth and narrow channels, a tanker spill is very possible. This would be the end to one of the most beautiful places in our country, along with the loss of fisheries, and every thing in the area. Devastation for those who live along the coast, property values etc. There is nothing good about this pipeline. I am very disappointed… Read more »

The Trudeau government is a HUGE disappointment without any respect for wildlife or wild places. He is arrogant and without compassion. What a disappointment for a leader in the first world! I am horrified that this pipeline should even be considered knowing the risks and previous leakages. Around the world we look on in total despair as how to change proposals such as this that will no doubt impact pristine and vulnerable environments.

I couldn’t have said it any better! Thank You

Scientists find cetaceans poo is an essential for the oceans’ ecosystems. Let’s concentrate on getting this planet back into some kind of condition and let oil companies find other ways to keep shareholders happy.