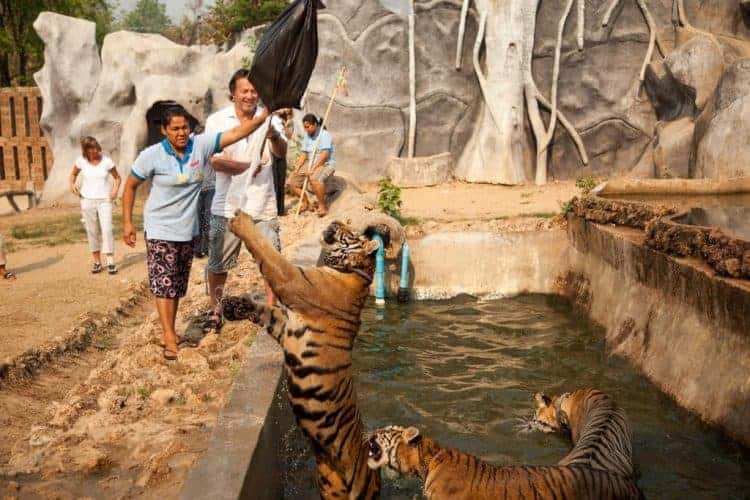 TripAdvisor, the popular travel review website, and its ticket sales company, Viator, said Tuesday they no longer will sell tickets to hundreds of tourist attractions that are widely accepted as cruel to wild animals, reversing a policy under which the companies had resisted considering the welfare of animals when promoting trips.

The move to stop selling tickets to elephant rides, swim-with-dolphin experiences, and attractions that allow visitors to pet tigers and other exotic animals comes after a one-and-a-half-year protest campaign by the London-based animal welfare group World Animal Protection and reporting by National Geographic’s Wildlife Watch, which drew attention to TripAdvisor’s continued promotion of such attractions at a time when dozens of other tour and travel companies were moving away from them.

Such attractions have been shown to cause animals psychological and physical trauma that can shorten their lives. They also result in more animals being taken from the wild for tourism.

When being trained to carry visitors, elephants go through a “crush,” which often involves being beaten with nail-tipped sticks and immobilized in small cages. Tigers and lions often are drugged to make them sedate and safer for tourists to pet and take photos with. Dolphins kept captive for tourists to swim with are unable to hunt, roam, and play as they would in the wild, which raises their level of stress and can result in behavioral abnormalities.

When National Geographic asked TripAdvisor about its policies earlier this year, a company spokeswoman said it wasn’t TripAdvisor’s place to steer users in any particular direction with regard to animal attractions.

But now the company, which has one of the world’s busiest travel websites, is not only ending sales to many animal attractions, it’s also developing a portal to educate tourists on animal welfare practices and the conservation implications of various wildlife tourist attractions. World Animal Protection, Oxford University’s WildCRU, People for the Ethical Treatment of Animals, and other animal welfare, conservation, and sustainable tourism groups will be involved in its development, the company said.

“TripAdvisor’s new booking policy and education effort is designed as a means to do our part in helping improve the health and safety standards of animals, especially in markets with limited regulatory protections,” Stephen Kaufer, TripAdvisor’s president and CEO, said in a statement.

The company will immediately stop selling tickets to certain attractions, and the ticket sales of others will end by early 2017, when the education portal will be launched.

All animal attractions, even those that are no longer bookable, will still be available to be reviewed on TripAdvisor and will be linked to the education portal.

“We believe the end result of our efforts will be enabling travelers to make more thoughtful choices about whether to visit an animal attraction and to write more meaningful reviews about those attractions,” Kaufer said.

A study released last year by World Animal Protection and WildCRU found that tourists aren’t very good at determining whether a wildlife attraction is humane or not. Researchers found that even attractions that experts judged as clearly inhumane often got good reviews on TripAdvisor. For example, reviewers overwhelmingly rated tiger attractions, which the study’s authors ranked as among the most inhumane, as “excellent” or “very good.”

That’s why it’s so important for TripAdvisor to step up and educate its users, said Steve McIvor, CEO of World Animal Protection.

“This animal abuse is a hidden by-product of the tourism industry. Millions of people look at TripAdvisor every day to guide what they see and do,” McIvor said in an email. “This is a significant step towards ending the sale of hundreds of cruel wildlife activities and sends a message to the travel industry and millions of users that wildlife entertainment such as taking tiger selfies or riding elephants is not something you should do.”

This article was first published by National Geographic on 12 Oct 2016.

We invite you to share your opinion whether ticket sales to cruel wildlife attractions should be banned? Please vote and leave your comments at the bottom of this page:

Of course this has to be stopped!!!

Of course they should be stopped. Any financial gain from using animals per se should be stopped. However it is true, many of the people visiting these attractions like the elephant walks, dolphin swimming etc do not realise there is ill treatment involved behind the scenes. They have possibly not read the stories, can not comprehend how animals will perform from mistreatment. They seem happy so they must be ok etc. Some have maybe heard but unless actually faced with the cruelty involved, like meat eaters/milk drinkers watching first hand the life cycle and killing of the food on their… Read more »

Yes they should be stopped, animals should be viewed in there natural environment, create more game reserves for them and ban all zoo, and confined captivity’s all animals deserve the right too enough space and a familiar and comfortable surroundings, not this concrete world the humans choose too live in. It was not there choice! why do we make them suffer!

Cruel, sick and pisses me off.

Cruel, sick and pisses me off.

Not only ‘ticket sales to cruel wildlife attractions’, but ANYTHING involving animals doing what they don’t naturally do, nor consent to do!!! Humans can entertain humans – leave animals alone and in peace!

YES! DEFINITELY… THAT IS VERY CRUEL AND INHUMANE TO ANY ANIMAL… THEY NEED TO BE FREE AS GOD INTENDED… NOT TRAPPED OR CAGED FOR SICK ENTERTAINMENT!!!

Why are wild animals used in human enterprises? Who gives the permission for capture and use? Why is animal suffering involved and permitted? Why are tourists so ignorant of the background methods used to attain this human “entertainment”? Who is to blame for their ignorance? Why are politicians unmoved by animal cruelty? Why don’t governments pass laws to outlaw animal trafficking, zoos, circuses featuring animal acts, animal exhibits, aquariums etcetcetc…? . the questions are endless and the answers few