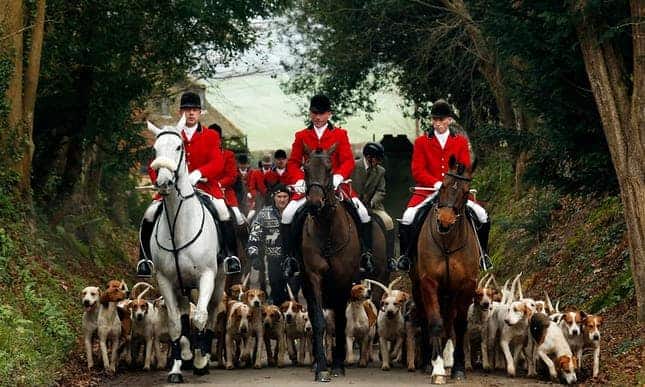 The fractious politics of hunting was far from the minds of Julian Smith and Becky Whitehead during a pleasant afternoon exploring Leicestershire’s only National Trust house – a 118-year-old cottage nestled in countryside just out of earshot of the M1.

Nevertheless their views were clear, before a landmark vote next month that could prohibit trust land from being used for trail hunting – where riders follow hounds in pursuit of a fox-based scent. “We would be very anti-hunting, to be honest, and very much in favour of the existing government ban on foxhunting,” said Smith, a trust member who had travelled from Nottinghamshire to visit old houses and walk in the Peak District.

The forthcoming poll has divided trust members and the annual meeting at which the vote will take place is likely to be stormy.

Those behind the motion view trail hunting as a loophole to circumvent the 2004 ban on foxhunting, while campaign groups such as the League Against Cruel Sports claim that 10 years of monitoring show that hunts rarely lay a trail, foxes end up dead and horses “ride roughshod over valuable and often protected land”.

“To be honest I would be surprised if the trust let foxhunting happen on their land,” Smith added, “although I have heard that once the hounds get the scent of a fox then there’s no stopping them.”

For an organisation already mired in its fair share of other controversies – last month there was a row about staff wearing gay pride badges – the latest is something the trust could have done without.

Asked whether hunting took place around Stoneywell, the property at the trust’s Ulverscroft nature reserve, the poker-faced response from a tour guide was: “Foxhunting is illegal.”

But trail hunts do take place. Joss Hanbury, the master of one of Britain’s most prestigious hunts, the Quorn, said that riders used the land at least once a month and that an NT ban would “take quite a chunk” of the land used by the hunt.

“Our National Trust area is relatively small in comparison to other hunts but it would have quite a big impact on one day a month,” he said, while adding that northern hunts would be more affected.

“The Fell hunts are the ones which would be really impacted and some of them would almost have to stop hunting probably.”

Hanbury was also critical of recent changes introduced by the National Trust to the way it licenses trail hunts. While the trust’s board is calling on members to vote against the motion to stop trail hunting, the reforms include banning the use of animal-based scents for hounds or beagles to follow. The intention is to reduce the risk of foxes being chased accidentally.

“The problem is that hounds have been bred for generations to hunt live prey, in our case foxes, and so it’s difficult to retrain them to hunt something different because of their instincts,” said Hanbury. “They will know the difference between an artificial scent and the real thing, so the closer we get to an animal scent we feel they are more likely to stay on that.”

The potential threat to hunting posed by the National Trust vote carries a particular significance for the Quorn hunt, which was founded in 1696 and takes its name from a Leicestershire village. The charity’s president is Prince Charles, who once enjoyed hunting with Hanbury and the Quorn but no longer rides with them.

Asked why, Hanbury pauses before replying: “I’m sure he wouldn’t want me to say so but I think age comes into it. Also, he felt that he couldn’t be political and continue hunting even if it was hunting within the law, and so he stopped.”

Would Charles have held strong views on the current controversy? “I am sure he does but they are views that he cannot voice.”

In the local area there is no shortage of vocal hunt supporters in the affluent community of Woodhouse Eaves. One of the villagers, Diana van Nievelt, used to hunt herself.

“I remember going out with the hunt before the ban and it was never about bloodlust or wanting to kill foxes,” she said. “And when they were caught it was so quick.”

“The result now of that ending is that you will find people in the countryside here poisoning and trapping foxes in order to keep the population down, which means that they die a most miserable death.”

Nevertheless, even here the hunting fraternity has been on the defensive. Permission for the Quorn hunt to pass through the Outwoods – 110 acres of ancient woodland near Woodhouse Eaves, which riders had used as a shortcut while trail hunting – was revoked last year following an intensive campaign.

“Opposition has always been strong in Loughborough and Leicester, but I think that things really have been changing in terms of how hunting is viewed even by people in the country villages and towns,” said Christine Harris, a Labour councillor and animal rights activist who had been vice-chair of the woods management committee.

“I’ve been doing this for 35 years and when we have taken stalls to places like Oakham and even Melton, where they have the hunting museum, we have always had a good turnout.

“Eastern Leicestershire might be a little bit different but even there you will find farmers who do not want hunting to take place, although some feel they cannot say so.”

Back in Woodhouse Eaves meanwhile, the differing views among National Trust members were illustrated by Sue Gyles, who had journeyed from Nottinghamshire with her friend Susan Sullivan to ramble through a forest trail.

“I would probably vote for the status quo,” she said, when asked about her thoughts on whether hunts should be allowed to continue trail hunting on trust land.

“Some people will make a fuss out of anything and there has been a tendency for everything to have to be so PC these days. In fact, I remember coming across a hunt some time ago and the horses were all around us. It was lovely.”

That said, she chuckled at the very different view taken by another fellow trust member, her late husband: “He said that he didn’t want to pay and it was because he was very opposed to hunting.”

This article was first published by The Guardian on 10 Sep 2017.

We invite you to share your opinion whether trail (fox) hunting on National Trust land should be stopped? Please vote and leave your comments at the bottom of this page.

I love you Kenny

Why ask such stupid questions when you know the answer?

HUNTING ANIMALS ought to be STOPPED and Punished by LAW!

Damn right no hunting here….. anywhere, these people are archaic and its never been a sport, the fox sure as heck does not need to be abused, tortured, harassed, then meet as a timely death trophy,,,,,the dogs are dozens, the horses how many and how big and hunting an animal for boredom,,,,its rights for the fox not a right to be cruel and keep some sick what they say is tradition for the rich and bored, its not fair,or is it now then or in the future a need, but to strut and shout a poor animal to its death!!!!… Read more »

Yes. Who are you going to tell that? They have a strong lobby and funding for corrupt politicians.

Privileged with Nothing better to do than get all duded-up, sit on a poor, lace-uptake horse, take a pack of poor dogs and torture and kill a little fox – what a waste of Oxygen !

No it should not be banned

Yes it should be banned – it is barbaric and only sissy men go for it – the poor Fox doesn’t stand a chance with all those dogs chasing it – it is 100% wrong and needs to stop! Shame on these disgraceful people who think it is a sport – they should just imagine how scared the little fox is – what joy is there in that? These people who support fox hunting are evil and have NO conscience

Your headline is misleading. Trail hunting is not supposed to be hunting a live fox, which is illegal in UK. The opposition to it, which I, as an NT member support, is because it reportedly often becomes a live hunt.