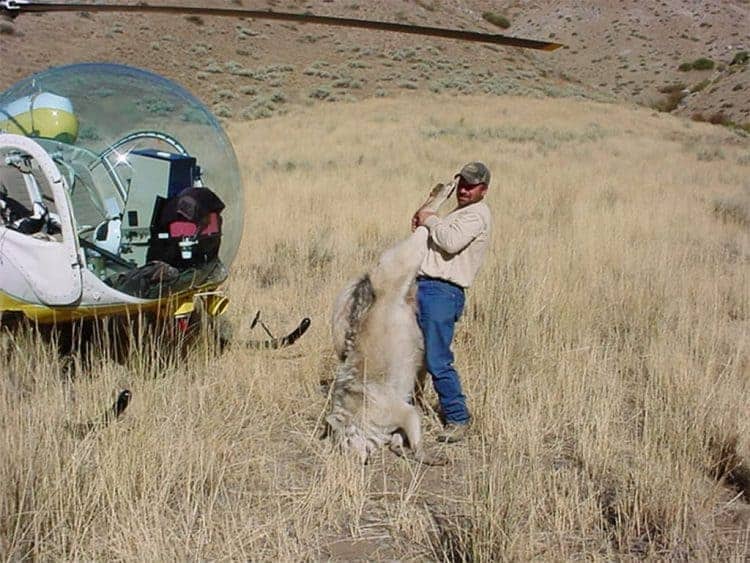 Despite persistent outrage from the public, the U.S. government killed 2.7 million wild animals in 2016 — and almost 1.6 million were native wildlife, according to data released this week. That’s roughly five animals every minute.

Even after scientific investigations by a team of ecologists cast serious doubts around the necessity of these killings, Wildlife Services, an arm of the U.S. Department of Agriculture (USDA), continued with the mass slaughter, using poison, firearms, snares and painful leghold traps. The death toll is actually down from 2015, when 3.2 million animals were killed, and comparable to 2014’s numbers, although some worry that there is no real way to verify the numbers the government reports.

Wildlife Services exists “to improve the coexistence of people and wildlife,” according to its website, but special interest groups, like ranchers raising livestock, appear to have become be the priority, pushing animals out wherever people need more room.

“Today’s USDA’s Wildlife Services (WS) delivers a vital service to farmers and ranchers throughout the United States by providing federal expertise in managing wildlife damage,” a USDA spokesperson told The Dodo. “Although we emphasize the use of nonlethal tools, they are not always effective. No one tool provides 100% protection and lethal methods are sometimes necessary.”

“In many cases, preventative measures have already been tried and exhausted,” he said. “Our staff are often asked to assist with or implement lethal control methods for other agencies or members of the general public, leaving some individuals and groups with a critical view of our program.”

Because many methods of slaughter are indiscriminate, the government reported that 2,790 animals were unintentionally killed last year, including bears, bobcats, foxes, otters and turtles. Even family pets have been reported dead in the past because of these methods.

Recently, a rare Oregon gray wolf died because he was lured by an M44, a device intended to kill coyotes that shoots cyanide into the mouth of any animal who bites down on it. Cyanide poisoning strangled the wolf’s cells, making it impossible for him to absorb oxygen, and he suffocated to death. He was one of just six wolves of Oregon’s Shamrock pack.

As for the animals the government agency actually intends to kill, they perish in a flurry of controversy. Last year, Wildlife Services killed 76,963 adult coyotes, and destroyed 430 coyote dens, likely killing uncounted pups. At least 14,654 prairie dogs were killed and over 68,000 prairie dog burrows were destroyed or fumigated. Wildlife services killed 3,791 foxes, and an unknown number of pups in 128 dens, which were destroyed; 21,184 beavers, 997 bobcats, 415 gray wolves, 407 black bears, 334 mountain lions and 535 river otters (415 of them were killed “unintentionally”) also died in 2016 at the hands of the government agency.

“Many of these methods are implemented without first considering experimental evidence of their effectiveness,” the investigation, released last September, said. This means that killing so many animals, including natural predators, could be making the conflict between wild animals and farmers even worse. Another investigation showed that killing predators to protect livestock can even backfire. For instance, for each wolf killed, the odds that other wolves will prey on nearby farm animals actually increase.

“Despite mounting public outcry to reform these barbaric, outdated tactics, Wildlife Services continues its taxpayer-funded slaughter of America’s wildlife,” Collette Adkins, a biologist and attorney at the Center for Biological Diversity, said in a statement. “There’s simply no scientific basis for continuing to shoot, poison and strangle millions of animals every year … Wolves, bears and other carnivores help keep the natural balance of their ecosystems. Our government kills off the predators, such as coyotes, and then kills off their prey — like prairie dogs — in an absurd, pointless cycle of violence.”

Adkins has hope that if enough people put pressure on the agency, things could change and American wildlife could become much safer.

“I’m hopeful that if the public continues to speak out against this senseless brutality, we’ll see reform,” Adkins told The Dodo. “Congresspersons need to hear outrage from all of us who care about wildlife and wild places.”

This article was first published by TheDodo.com on 14 Mar 2017.

We invite you to share your opinion whether Trump should disband USDA Wildlife “Killing” Services? Please vote and leave your comments at the bottom of this page.