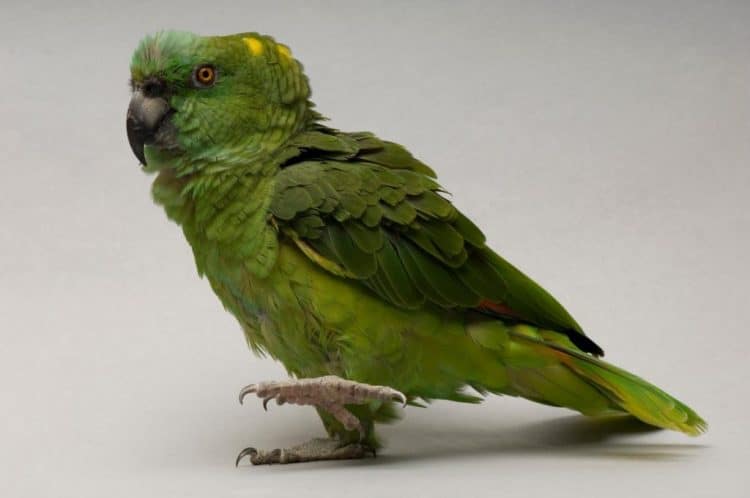 Traffickers from Latin America are desperate to get their product into the United States—so desperate they’ll risk the dangers of swimming across the Rio Grande with their contraband. But it’s not meth and it’s not cocaine. In one case, according to a special agent, it was about 25 parrots destined to be sold as pets. Smugglers used tire inner tubes to keep the box of birds afloat during the river crossing.

The southern border of the U.S. is a hot zone for wildlife smuggling, and while President Trump has vowed to stop illegal immigration from Mexico, it’s unclear what he intends to do to thwart the flow of illicit wildlife.

Of the nearly 50,000 illegal shipments of wildlife and wildlife products seized at ports of entry from 2005 through 2014, more than a quarter originated in Latin America, according to a 2016 fact sheet from Defenders of Wildlife, a Washington, D.C.-based conservation organization. This included nearly 55,000 live animals and three million pounds of wildlife products.

Alejandra Goyenechea, senior international counsel for Defenders of Wildlife and a co-author of a comprehensive report about the trade published the year before, says the findings represent “just the tip of the iceberg. We cannot imagine how much more is happening that we haven’t caught,” she says.

Latin America has the greatest wildlife diversity on Earth, but its animal populations have fallen by 83 percent since the 1970s—the most drastic decline of wildlife in any global region—according to the 2014 Living Planet Report by the Washington DC-based World Wildlife Fund.

Nicholas Chavez, the southwest region special agent for the U.S. Fish and Wildlife Service, which is responsible for, among other things, enforcing the country’s wildlife laws, oversees enforcement along most of the nearly 2,000-mile border with Mexico. The main entry points for smuggled wildlife are border cities such as El Paso, Texas, San Diego, California, Nogales, Arizona, and Laredo, Texas.

Chavez says the top confiscated live animals—the majority destined for the pet trade—are reptiles and parrots from countries throughout South America as well as Mexico. Small monkeys are also seized. Smuggled wildlife products are mostly leather wallets, boots, and belts made from the skins of caimans, alligators, and sea turtles. “There’s a demand for exotic skin boots, and the more exotic, the more people want them,” he says.

“Coming from Mexico, there’s a lot of vehicle traffic, and neither customs or us can catch everything.” There aren’t enough agents, Chavez adds, “and it’s all throughout the border.”

Take Brownsville, Texas, a city with three bridges across the Rio Grande but only one full-time inspector and one agent based about 50 miles away who’s responsible for about 325 miles of border between the Gulf of Mexico and Eagle Pass, Texas. El Paso has five inspectors and one agent covering the 450 miles of border that includes three bridges, a railroad, and the city’s international airport.

These few officers aren’t solely responsible for policing the illegal trade, Chavez explains. In addition they must monitor all the animals and wildlife products coming in legally.

Most of the seized live animals are placed in rehabilitation facilities and zoos, and some are repatriated to their country of origin. The majority of confiscated animal products are sent to the National Wildlife Property Repository in Denver, but a number go to universities and museums for their educational value.

How the legal Trade Works

Trade of animals, plants and wildlife products between countries is regulated by the Convention on International Trade in Endangered Species of Wild Fauna and Flora (CITES), a treaty joined by 183 governments around the world.

According to Goyenechea, many of the popular animals and wildlife items—the parrots, the caiman shoes, the crocodile boots—coming legally into the U.S. from Latin America are classified as CITES Appendix II species. This means they require a permit from the country of export, and each country has a quota—a set number of annual permits—for each species to ensure its population remains sustainable.

Any trade outside this legal system has the potential to put wild populations in jeopardy, Goyenechea says.

And, she adds, animals traded by smugglers are more likely to suffer, even die, during transport. “By hiding them, they put them in worse conditions. Of course there’s always going to be a risk by trading live animals, but it’s worse when they’re traded illegally.”

To catch a smuggler

In 2016 Congress passed the Eliminate, Neutralize, and Disrupt (END) Wildlife Trafficking Act, which aims to combat trafficking and poaching globally. Among other things, the law elevates wildlife trafficking to the same offense level as drug and arms trafficking and gives prosecutors more tools to go after individuals involved in wildlife crimes.

One commonly cited limitation of the act is that it doesn’t restrict intrastate trade of illegal wildlife parts and products. So some states are taking matters into their own hands.

New Mexico, which shares a border with Texas at El Paso, one of the top border cities for illegal wildlife shipments, has no legislation to address wildlife trafficking. So Sen. Mimi Stewart (D-Albuquerque) recently introduced the New Mexico Wildlife Trafficking Act, which would impose both civil and criminal penalties. Offenders would be charged with a misdemeanor and subject to a maximum fine of $25,000, or three times the value of the smuggled item, whichever’s greater.

Stewart says she wants to discourage the trade by hitting traffickers where it hurts—their pocketbooks. “It’s really become incumbent upon the states to do the enforcing. I think we need some added tools for our state and national law enforcement to deal with this,” she says of the new legislation.

Arizona is one of nine states that have already introduced similar legislation in 2017. Most states, Stewart says, focus on rhino horn and elephant ivory, and California is the only border state with multispecies legislation against wildlife trafficking.

Chavez cautions against over-reliance on legislation to solve the problem. “We’ve had the Lacey Act on the books for well over a hundred years, and there’s always a smuggling case.”

The Lacey Act, passed in 1900 as the first federal law to protect wildlife, prohibits the trade of illegally sourced wildlife, fish, and plants, and it allows the U.S. to enforce the wildlife laws of the country of origin.

According to Chavez, the Lacey Act’s main weakness is the difficulty of enforcing another country’s laws with cooperation from its government. And foreign laws, or interpretation of those laws, may change. In addition, at times a foreign government may not be able to provide witnesses or other necessary support for a case.

Educating consumers is “maybe a better option than putting another law on the books,” Chavez says.

The U.S. Fish and Wildlife Service is partnering with the U.S. Wildlife Trafficking Alliance—a private-public partnership working with government entities—to provide travelers and travel industry leaders with educational resources that can be used to help fight the illegal wildlife trade. Resources include pamphlets, public service announcements, and infographics. In November 2016 U.S.-based JetBlue airlines, a member of the alliance, began airing a short film on its flights about “buying informed” when visiting countries in the Caribbean.

“Governments and organizations around the globe are collaborating in unprecedented ways to combat wildlife trafficking,” said Bryan Arroyo, assistant director of the U.S. Fish and Wildlife Service’s International Affairs Program in a January press release. “Powerful as these efforts are, the real power lies in the hands of consumers. Educating travelers so they don’t unwittingly contribute to the poaching and wildlife trafficking epidemic is vital to ending this grave threat to our planet’s most precious legacy.”

Goyenechea, of Defenders of Wildlife, agrees. “As consumers, we’re the ones driving the demand,” she says. “If [traffickers] see consumers aren’t purchasing illegal items, the demand decreases. We’re the only ones that can change that, and we need to be aware.”

“I think the government has realized that the United States is a major player as a consumer, has taken major steps, and has been an example to the rest of the world,” Goyenechea says. “I just hope the new administration will support the measures that have been adopted.”

Sen. Chris Coons (D-Delaware) co-sponsored the END Wildlife Trafficking Act in the Senate and says he’s hopeful that President Trump and his team will continue the fight against wildlife trafficking, which he calls a bipartisan issue.

“The fact that President Trump’s executive order on transnational organized crime included wildlife crime shows the issue is on the administration’s radar, but it’s up to Congress to hold the administration accountable and make sure the American people recognize that wildlife trafficking and other forms of natural resource exploitation are serious threats to international stability and security,” he said in an e-mail.

Bob Dreher, Defenders of Wildlife’s senior vice president for conservation programs, agrees, adding that it’s still a bit early to speculate on how the administration may confront wildlife trafficking. But he thinks it’s possible that the issue will carry weight with the administration in its fight to tighten border security.

Nevertheless, Dreher says proposed budget cuts across federal agencies such as the Department of Justice and the Department of the Interior—the umbrella agency of the U.S. Fish and Wildlife Service—could have “crippling effects on our ability to fight wildlife crime. One of the things we have to say we’re worried about is that they’ll be starved for funding.”

Because the president has yet to speak out on the issue, Dreher says, “I think this is really kind of uncharted territory.”

This article was first published by National Geographic on 14 Mar 2017.

We invite you to share your opinion whether Trump should stop the illegal wildlife trade from Mexico? Please vote and leave your comments at the bottom of this page.

Yes, they should stop the illegal wildlife

Trump won’t do anything to help the animals…he’s a demon.