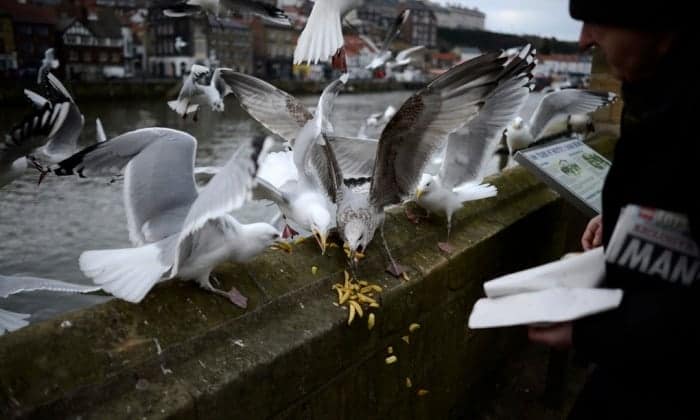 Kebab-stealing seagulls could have their wings clipped after George Osborne set aside £250,000 of budget funding to stop their scavenging raids on British towns and cities.

Part of the chancellor’s plan to get Britain “walking tall” involves more research into the aggressive behaviour of urban gulls, which the Treasury said had become widespread.

The Liberal Democrat MP Don Foster claimed it as a victory, having campaigned for years for more funding to research the problem that affects his own constituency in Bath.

In 2012, Foster hosted a “seagull summit” for MPs from areas around the UK affected by gull attacks. He said he was thrilled by the news of the funding.

“For several years people in Bath have been contacting me about this issue and asking for action,” he said. “Urban gulls cause mess, noise and damage to property, and are very aggressive in the nesting season.”

However, Labour suggested the decision was part of a cynical ploy by the chancellor to offer sweeteners to voters in Conservative and Liberal Democrat constituencies before the general election in May.

Jon Ashworth, the shadow Cabinet Office minister, told the Financial Times it was “pork-barrel politics at its worst”.

The chancellor set aside £56,000 for the refurbishment of the Muni theatre in Pendle, a seat won by the Conservative MP Andrew Stephenson in 2010 with a majority of about 3,600.

Other measures included £97m to support the regeneration of Brent Cross in Hendon, where the Tory MP Matthew Offord will defend a majority of just 106.

The Treasury told the FT that money had not been disproportionately directed towards marginal seats, highlighting the coalition’s £13bn investment in transport infrastructure across Labour strongholds in the north of England.

This article was first published by The Guardian on 20 Mar 2015.

We invite you to share your opinion whether UK towns and cities should be allowed to clip seagulls’ wings. Please vote and leave your comments below.