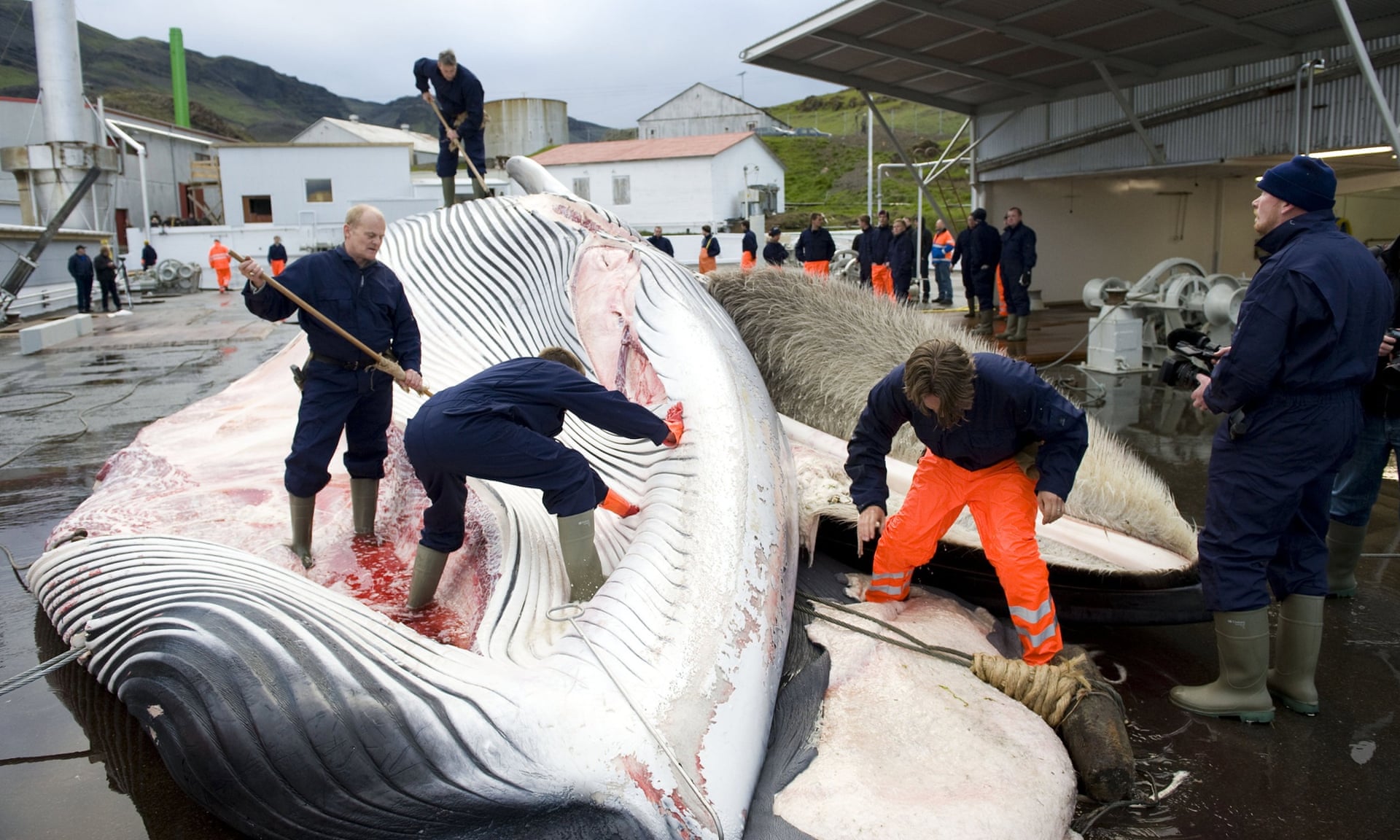 Icelandic whaling boats have left port to begin the 2015 whaling season, authorities said on Monday as more than 700,000 people signed a petition calling for an end to the hunt.

No whales had been caught as of Monday afternoon.

Iceland and Norway are the only nations that openly defy the International Whaling Commission’s 1986 ban on hunting whales.

For 2015, Iceland’s fisheries ministry has given the whalers a quota of 154 fin whales – the second largest mammal after the blue whale – and 229 minke whales.

A petition against the hunt on the activist website Avaaz.org had by Monday afternoon gathered more than 700,000 signatures – equivalent to more than twice the population of Iceland.

The petition calls on the government of the Caribbean nation St Kitts and Nevis to withdraw its flag from the Icelandic whaling company Hvalur’s vessel Winter Bay, so that it cannot deliver a shipment of whale meat that is currently on its way to Japan.

Consumption of whale meat in Japan has fallen sharply in recent years, while polls indicate that few Icelanders regularly eat the meat.

This article was first published by The Guardian on 29 Jun 2015.

We invite you to share your opinion whether whaling by Iceland and Norway should be banned. Please vote below and leave your comments at the bottom of this page:

In the event that you voted for a ban on whaling by Iceland and Norway, please sign the petition:

Thank you for signing the petition.

Håvid Falch Just listen to yourself! "80% of whales killed in Norway die instantly". First of all, that means that you know that 20% do not die instantly. Secondly, what a ridiculous claim that the killing of an animal the size of a whale by whalers can be measured scientifically. "A lot of research went into the current generation of grenade harpoons". You are clearly delusional if you think that such a device does not cause incredible suffering. Of course there is extreme cruelty involved. We can't ask the whales how they feel to be butchered, but if we could,… Read more »

yes definitely this barbaric practice has to stop.norwegian whalers who are looking for a way to make a living,whale watching is a 1.5 billion dollar a year industry worldwide and no government subsidies or blubber storage required

Saying things like that about people you don't know is a perfect example of being an arsehole.

Leave the whales alone before they become extinct too.

having spent a fair amount of time in Lofoten, I understand your philosophy very well. You guys live in very close harmony with the sea.

I can appreciate that sentiment, do love seeing wildlife at sea. Especially nice in a small boat or kayak. Had a lot of nice encounters while on Svalbard a few years ago. Like being tailed by a seal for the better part of an hour. Or when a flock of beluga went past. And where I live, dead oceans would mean a dead community and barely any people. We've made some conservation and quota blunders in the past, of which the whales are only one. But I dare say we've learned a lot from it. They were the result of… Read more »

Strangely enough, and despite my original comment, I do support the ban on whaling in most parts of the world. And yes, this is based on emotion! I enjoy seeing whales at close quarters. I enjoy it when they come up to my boat, as curious about me as I am about them. So it is a kind of personal greed that makes me want hunting to stop. However!! Countries have the right to use marine living resources SUSTAINABLY in their own waters. We cannot impose our own cultural and emotional prejudices upon others. Some people eat cows, others consider… Read more »

We do kill them quickly and efficiently. Or at least I'd say we do, keeping in mind that both "quickly" and "efficiently" are surprisingly subjective terms. But with roughly 80% of minke whales hunted here in Norway dying near instantly, I don't feel that your claim of extreme cruelty is justified. It's not like we revel in their suffering. A lot of research went into the current generation of grenade harpoons. And it's my geniune hope that we can do even better with time. But of course, as long as the whole industry is in an international stranglehold, there is… Read more »

Whaling is cruel, unnecessary, abhorrent, and the people who are involved in it are arseholes…

You have to ask yourself WHY is this world so hell bent on destroying every living thing. There is absolutely no reason for this slaughter of Whales. STOP NOW

Håvid Falch Actually, there is something very savage and uncivilised about the needless killing of another sentient being. You cannot kill a whale quickly; therefore you are talking about a practice that involves extreme cruelty and suffering. It is utterly dishonest to fall behind claims of cultural imperialism when you are doing something barbaric. People will call it how it is.

A ban on whaling is not based on emotion. It is based on the fact that the slaughter of large inteligent mammals in this way involves extreme cruelty. You simply cannot kill animals of this size quickly and effectively without great suffering. This alone is reason to ban it. A whale is not something to be harvested like a crop, no matter how many times hunters and whalers use that ridiculous euphemism.

Iceland, Norway, Faroes & Japan need to STOP MURDERING DOLPHIN.
These animals are HIGHLY INTELLIGENT FAMILY & SOCIALLY DEPENDANT NONHUMAN PERSONS – They are NOT "meat" and it is NOT the 16th century anymore. These barbaric savages need to EVOLVE NOW!

Well Pierre, as you can see from the very first response you are spot on when you talk about emotions. And I'd never ask that people should feel fine about whaling. If it bothers them, that's their legitimate concern, if not a reason to end the practice. A poll like this is a bit of wasted time though. Nobody has the authority to just "ban" it on a whim, so the whole premise of the question is flawed. And that's not even mentioning the idea that many people will be signing on these polls without knowing much if anything about… Read more »

Shouldn't your battle cry be stop pollution, stop it now?

Shawn Lockwood you mistake brain size for intelligence. That is like saying big feet mean better dancing. In proportion to their bodies the whale's brain is very small.

Why murder innocent friendly creatures , its wrong on every level

Cod and other fish are not a highly intellegent mammal. You can also farm fish, not whales. They scream in pain and are highly social. With brains bigger than humans, they are a hell of a lot smarter than the beasts killing them.

If this continues at the rate it is, our waters will be lifeless. If that happens, humanity dies. Why is this so hard to understand? A ban was put in place to protect endangered species. When they are gone for good, will we move on to another species and so on and so on, etc. Let our oceans recover from overfishing. We take their food and then call them a problem. Get real, the only problem is the human race. The ocean survived thousands of years without our interfering. Give it back.

of course, what a stupid question!

The world will never heal until we stop the killing of other sentient species – we consume murdered beings not inanimate objects with out thought or feelings or a will to have its life.

Should whaling by Iceland and Norway be banned ? Yes. Whaling is barbaric and cruel. Whales are higly intelligent mammals. Both of these countries are openly defying the International Whaling Commissions's 1986 ban on hunting whales. Iceland's Fin Whales are endangered. Iceland and Norway should be banned from hunting Fin and Minke whales and any other kind of whale indefinitely.

This sickening practice must be stopped and banned – what is wrong with people?

I found your post most interesting and support your opinion. What I do not understand is if countries whale hunt when there is a ban on whale hunting, why are they not being fined, their catch taken away from them. If hit with large fines and boats/whales confiscated this would end the problem. I do not support whale hunting of any kind, under any circumstances, especially under the conditions written in your comment.

people should even need to think about the answer to this question ! It's all wrong and I'm totally against the hunting and culling of all types from foxes, Badgers, whales, sharks and the list goes on and on and I will do anything I can in my ability to protect our wildlife etc !

The only reason for banning the whaling in these countries would be if it was unsustainable and/or badly managed. From what I have seen the whale fishery in both these countries is well managed and quotas are at a sustainable level. What may well stop these fisheries is the falling demand for whale meat by locals.

Calls to stop the whaling based on emotion are wrong! There are many fish resources, such as cod, that are much more endangered and overfished than Minke Whales, yet there is very little outcry at the continued fishing of these species.

With the radioactive isotopes from the disaster at Fukushima coursing through the Pacific, estimated to spread world-wide by 2025, the plankton whales feed upon may vanish, and the whales along with them. Not to mention the entire oceanic food chain. One does not have to search far to find story after story of seabirds, sea lions and seals stranding on North American Pacific beaches, many starving or nearly dead of starvation. The food chain is collapsing in the Pacific. A source I have among the commercial fishing fleets in the Bering Straits tells of Cod traps coming up empty of… Read more »