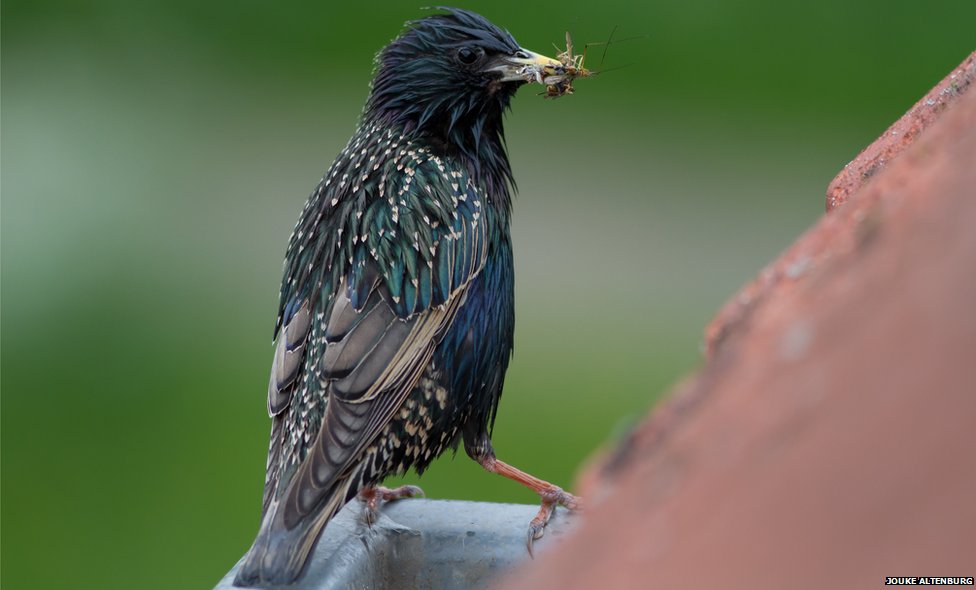 The widespread use of a type of insecticide that has been blamed for honeybee deaths is linked to a marked decline in bird numbers in Europe, a report says. Imidacloprid, a neonicotinoid chemical, is widely used in agriculture to exterminate pests. Dutch scientists say their data shows that the chemical is associated with a collapse in common bird species.

But manufacturers argue the evidence of these effects is not substantiated. Imidacloprid is one of a number of neonicotinoid insecticides introduced in the 1990s as a more environmentally friendly way of dealing with crop pests.

What exactly are Neonicotinoids?

Neonicotinoids have been hugely successful, and now account for about 40% of the global pesticide market.

However, there have been growing concerns about their environmental impacts. A number of studies have linked them to the decline in honeybees.

A recent, wide-ranging review of the scientific literature concluded that the chemicals were causing significant damage to a number of beneficial species.

Now, Dutch scientists have, for the first time, shown an association between the use of imidacloprid and a decline in common birds.

The scientific journal Nature published the study, written by biologists at Radboud University Nijmegen and the Sovon Centre for Field Ornithology, on July 9, 2014.

The researchers looked at 15 bird species that depend on insects as their main source of food. The Dutch have kept long-term records on the numbers and health of these warblers, swallows, starlings and thrushes.

The scientists were then able to compare this dataset to surface water quality measurements. They found that higher concentrations of imidacloprid in the water was “consistently associated” with declines in many of the monitored birds.

A farmer’s perspective on neonicotinoids

At this time of the year he is about to harvest oilseed rape, which has been previously treated with neonicotinoids. He’s environmentally aware: his fields have wide verges for birds and he puts out feed in the winter. He doesn’t believe the science against neonicotinoids has been proven out in the field.

“If we knew we were decimating our bee population then we wouldn’t do it,” he told BBC News.

As a result of the EU moratorium, he will have to spray with older pesticides that he says “aren’t as effective and are a lot more random”.

The ban is a “step backwards” he argues. “We don’t spray for fun; it’s expensive.”

Surveying a field of totally untreated kale, which has been decimated by the flea beetle, he says the same would most likely happen to the neighbouring oilseed rape field if neonicotinoids were not used.

“If the concentrations are higher than 20 nanogrammes per litre in the environment, we found a reduction of 3.5% in local populations,” said one of the authors, Dr Hans de Kroon from Radboud University.

“In 10 years, it’s a 35% reduction in the local population. It’s really huge. It means the alarm bells are on straight away.”

The scientists believe that the insecticides, which are mainly used to coat seeds, are leaching into the soil and water and accumulating over time. They argue that in some soil types, neonicotinoids can persist for two to three years.

They say this build-up is killing more insects than intended and this is having a significant impact on birds that eat them.

“They might be less able to produce their young, or grow their young,” said lead author, Caspar Hallman, also from Radboud University. “It might increase their mortality by food deprivation. We think this is the most likely mechanism.”

The scientists still can’t rule out the possibility that imidacloprid might be having an effect through other means. It is possible that birds are being exposed to the chemical through the prey that they consume or they are simply eating seeds coated in it.

As well as looking at pesticide concentrations, the researchers also looked at the possibility the decline in these species had started before the introduction of imidacloprid. They also examined the idea that changes in land use were responsible.

They ruled out both possibilities.

“In that sense, this could be the definite ‘smoking gun’. You now see the evidence getting more complete, around the effects of imidacloprid on the environment.”

Bayer, the manufacturer of imidacloprid, rejects the findings of this new work, saying it does not prove a “causal link” between the chemical and the decline in birds.

“Neonicotinoids have gone through an extensive risk assessment, which has shown that they are safe to the environment when used responsibly according to the label instructions,” said a spokesman.

“Birds living close to aquatic habitats – the species that one could expect to be affected most by concentrations of neonicotinoids in surface water – show no or negligible negative impact.”

Other observers, though, regard the Dutch study as breaking new ground in terms of understanding the impacts of neonicotinoids. They believe it is the first evidence of impacts on a much wider range of species than just bees.

“If insectivorous birds are declining because of these chemicals, then other things that eat insects are going to be, too,” said Prof Dave Goulson from the University of Sussex, UK.

“We’re also looking at bats and hedgehogs and shrews and fish and so on. There’s not much left really. How much evidence do you need before you take action?”

The researchers argue that their work should inform the political debate about neonicotinoids.

The EU has instigated a two-year moratorium on the use of the chemicals on flowering crops. The UK was one of eight nations that opposed the ban.

Scientists in the field say the new research strengthens the argument for increasing restrictions on a wider range of crops and for domestic users.

Many oppose an outright ban but they are challenging manufacturers to provide evidence that the use of neonicotinoids boosts yields.

“We need to identify when they are important and restrict use to those sites; it’s not difficult,” said Prof Goulson. “You need to do field trials, and try not using the neonicotinoid seed dressing.

“If you don’t get a reduction in yield then stop using the bloody things; its not rocket science!”

We invite you to vote FOR or AGAINST a complete ban on Neonicotinoids. Please vote and also leave your comments at the bottom of this page.

Ban the Use of Neonicotinoid Pesticides Worldwide

This editorial content of this article was written by Matt McGrath for BBC News Science and Environment.