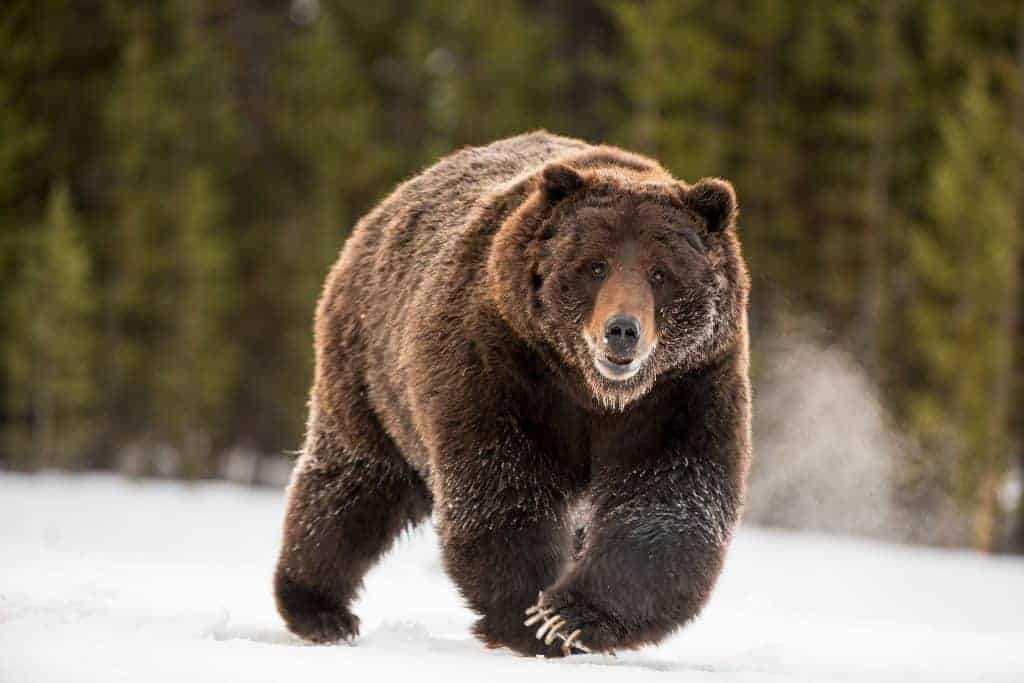 To see how far we’ve come in restoring grizzly bear populations in and around Yellowstone National Park, consider: There are five times more grizzlies now than there were in 1975, when they were first protected under the Endangered Species Act.

The area grizzlies roam has increased by half. And conflicts with bears attracted to landowners’ chicken coops now pose a greater threat than hunting.

Thus far, Yellowstone grizzly bear recovery is by most measures a massive American wildlife success story. But is that enough?

As Interior Secretary Ryan Zinke announced on Thursday that the Trump administration plans to remove Yellowstone’s bears from protections afforded by the ESA, state officials around the park offered a resounding “yes.” Conservationists almost uniformly answered “no.”

The federal government announced its plan to hand over management of the storied predator to the states of Idaho, Wyoming, and Montana—the culmination of a process that began under the Obama administration, and a decision that could ultimately lead to legal grizzly bear hunting seasons.

In his announcement, Zinke, a former Montana congressman, lauded the decades of work and progress.

“As a kid who grew up in Montana, I can tell you that this is a long time coming and very good news for many communities and advocates in the Yellowstone region,” he said in a statement.

Laurie Wolf, acting administrator for communication with Montana Fish, Wildlife and Parks, a state agency, agreed. “It’s time to be happy and proud of this. We’re pretty excited.”

But reaction from conservationists ranged from skeptical to outright hostile.

“This decision is extremely premature and could set grizzly bear recovery in the Yellowstone region back by decades,” said Bonnie Rice, with the Sierra Club’s grizzly bear program in Bozeman, Montana.

Andrea Santarsiere, with the Center for Biological Diversity, said her organization is “seriously considering a legal challenge.”

A Legacy of Hunting

Once numbering 50,000 or more, grizzly populations by the mid 20th century had been decimated by hunters. Only 136 remained in the Yellowstone region, with even fewer in parts of Washington, Idaho, and Montana. The battle over the future of Yellowstone bears has been waged for more than a decade, with the states eager to take back bear management even before the Bush administration announced in 2007 that it would remove bears from ESA protection. That decision was successfully challenged in court.

Environmentalists and some scientists on Thursday said they fear the new plans for state control will leave Yellowstone bears isolated, preventing them from someday connecting with populations in northern Montana and Idaho. They worry that even if the Trump administration sticks with preliminary plans announced by Obama, states would be allowed ultimately to kill too many bears, perhaps even letting the ultimate population dip below what it is today.

The proposal “fails on multiple levels,” said Theresa Pierno, president of the National Parks Conservation Association, and it “ignores multiple issues raised by the public and wildlife managers.”

Wolf, with the state of Montana, said if Zinke’s decision survives challenges, little would change right away. The same conservation strategy would guide managment, she said, and the state is in no hurry to start hunting bears. Any move to do so will go through the same public process used to set all seasons, she said.

“We are planning to continue counting females with cubs, monitoring bear distribution and bear mortality,” Wolf said. “Hunting will be dependent on population levels and overall mortality rates.”

Still, environmentalists worry that hunting is an inevitable part of state management, and that public reaction will further polarize bear recovery.

Sooner or later, Rice, with the Sierra Club, said, “there will be trophy hunting on the doorstep of Yellowstone and Grand Teton National Park. If and when that happens there will be a real backlash.”

Some wildlife advocates also worry that the threats posed by climate change have not been taken seriously enough. Rising temperatures already have decimated whitebark pine trees, making them more susceptible to beetle infestations. In some areas, the trees’ nuts have long been a staple food for grizzlies. But many bears already seem to be thriving in areas where the trees aren’t found, a reminder that in many ways grizzlies are omnivores that can be quite adaptable.

The fact that populations around the northern Rockies and North Cascades of Washington already are limited to a mere half-dozen distinct areas makes the future that much more tenuous. Some advocates are most concerned that grizzlies not be hemmed in by political boundaries.

“I do know that if people work to coexist with grizzlies and allow them to continue to expand their range, grizzlies can do the rest,” said Jonathan Proctor, with Defenders of Wildlife. “They will survive and thrive and expand, if we just let them.”

This article was first published by National Geographic on 22 Jun 2017.

We invite you to share your opinion whether Yellowstone Grizzlies should be removed from the Endangered List?Please vote and leave your comments at the bottom of this page.