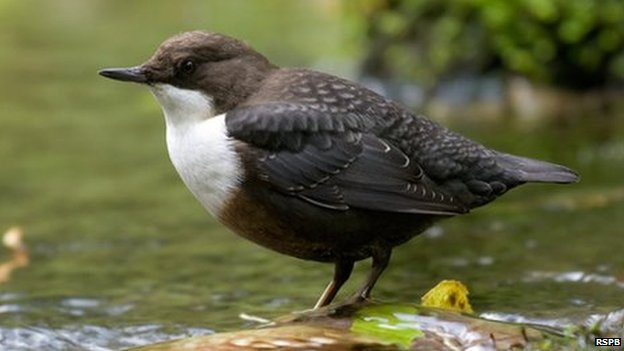 Wild birds nesting along urban rivers in south Wales are being affected by harmful pollutants, research suggests. There are concerns chicks are underweight and altered hormone levels have led to fewer female chicks hatching. Data obtained by Cardiff University scientists suggested the cause was contaminants found in insects and fish that the birds fed on.

The pollution was described as a “source of concern”.

The research was carried out alongside the Natural Environment Research Council, Exeter University, and the University of Saskatchewan in Canada, and looked at Eurasian dipper birds – a river bird that feeds on insects and fish in upland streams.

Dippers are seen as valuable monitors of river pollution that can help assess whether urban contaminants are influencing wildlife reproduction and development.

Professor Steve Ormerod, from Cardiff University school of biosciences, said: “Pollutants are still a source of concern for the wildlife along Britain’s urban rivers despite very major recovery from the gross pollution problems of the past.

“Wild birds, such as dippers, are very important indicators of environmental well-being and food web contamination, and we need to know if populations, other species or even people are also at risk.”

The research revealed urban contaminants in the birds’ food and a strong link with a depressed thyroid hormone – which plays an important role in development and growth – in chicks. One thyroid hormone was 43% lower in chicks from urban rivers than those on rural rivers.

Scientists are now planning to examine the issue further as well as locating the exact sources of the pollution.

John Clark, from the RSPB, said: “We need to work in partnership with water companies, regulators, statutory agencies and communities at a catchment scale to address those practices that continue to introduce damaging chemicals to our rivers.”

This article was first published by BBC News Wales.