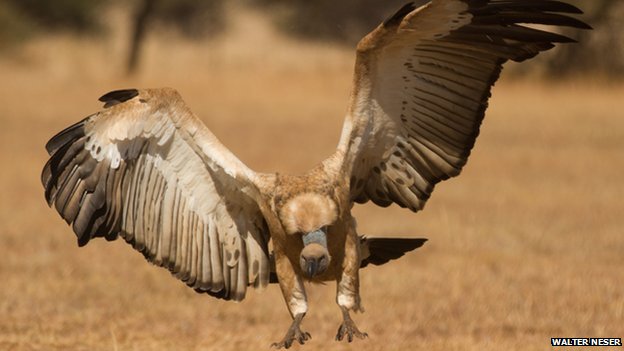 Cape vultures in southern Africa are using expanding networks of pylons and power lines to extend their range, say scientists. At the same time these lines are also contributing to this threatened bird of prey’s decline through fatal collisions and electrocutions. The study involved a team of experts from the UK and South Africa tracking individual bird movements using GPS. The results are published in the online journal PLoS One.

Southern Africa’s Cape vultures (Gyps coprotheres) – like many other species of vulture – are in decline. Contributing factors include feeding on illegally poisoned carcasses and fatal collisions with wind turbines and power lines.

To understand more about their movements, and how these vultures interact with power lines, a team of scientists fitted GPS devices to five adult and four immature birds.

“What we were trying to find out was how far they were going and what sort of areas they were feeding in,” explained lead researcher Louis Phipps from Nottingham Trent University, UK.

They thought the birds would be travelling large distances, but were not expecting the vultures to be travelling across almost the whole of southern Africa.

“Their individual home ranges on average cover an area larger than the British Isles which is a huge area and among the largest areas of any vulture,” said Mr Phipps.

From the capture site the birds travelled up to 1,000km (621 miles) in a straight line and as a group entered five different countries, regularly crossing international borders.

“It seems that their movement actually followed the pattern and distribution of where those [power] lines were and have been constructed,” he said.

According to Mr Phipps these vultures are using the pylons and power lines as roosting and perching sites where no other suitable perches are available, allowing them to travel beyond the recognised range for this species.

And because they are spending more time in the vicinity of these power lines, the vultures are at a higher risk of colliding with the overhead wires. Even though they could travel further by using the power lines as roost sites, there is an increased risk of fatalities.

“So just as a mortality factor power lines are bad, but potentially they may be benefitting them by furthering their range to the west,” Mr Phipps told BBC Nature.

The study also examined the role of protected areas and wildlife reserves.

“Our data actually shows that although vultures, especially Cape vultures, definitely need these areas for protection…they actually spend most of their time foraging on private farmland.

“This leaves them exposed to the full range of threats in the wider landscape, more exposed to poisoned livestock carcasses and harmful veterinary drugs which was the cause of the Asian vulture population collapse.”

Mr Phipps explained that as GPS tracking is very accurate it shows exactly where vultures are foraging, building on this data in the future will allow co-ordinated cross border conservation measures to be implemented in exactly the right areas.

“There are lots of factors playing against each other that make the vultures’ daily life a very big struggle,” Mr Phipps told BBC Nature.

“On balance power lines are not a good thing for vultures.”

This article was written by Jeremy Coles for BBC Nature News.