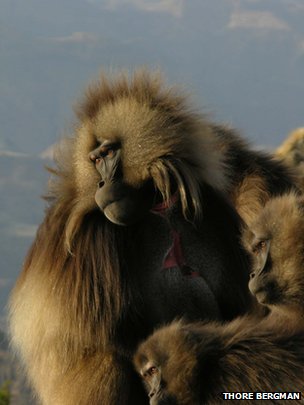 A bizarre sound made by a primate could help to reveal more about the origins of human speech, a study suggests. Scientists have found that the gelada, a species that is closely related to the baboon, makes a gurgling noise that shares features with human language. They believe the monkey’s call could be similar to the primitive noises that the evolutionary ancestors of humans once made. The study is published in the journal Current Biology.

The lead author Dr Thore Bergman, from the University of Michigan in the US, said: “Geladas make vocalisations that have some speech-like properties – it’s the first time that that has been shown in a non-human primates.”

The call of the gelada, which is found in the highlands of Ethiopia, sounds like a cross between a yodel and a baby’s gurgle. To create sounds of such complexity is unusual in the primate world. Monkeys and apes, in general, can only make the most basic noises.

It has been a puzzle how language evolved in humans, when this skill falls so short in our closest evolutionary relatives. But now scientists believe the gelada could help to shed light on the earliest forms of speech.

Researchers analysed the monkey’s unusual call, which they call a “wobble”. Last year a paper published in Current Biology proposed that while most primates lack the vocal anatomy required to produce sophisticated sounds, a behaviour known as “lip-smacking” could be related to speech.

This is friendly action where primates rapidly move their jaws, lips and tongues in much the same way that humans do as they speak. “The problem is that no primates have ever been shown to produce vocalisations while making these facial movements,” explained Dr Bergman.

Apart from, he said, the gelada. “These primates can do the complex mouth movement and vocalise at the same time.” Further analysis also revealed the rhythm in the sound closely matched the patterns heard in human languages.

Dr Thore Bergman explained: “In [human] speech, the onset of a syllable is loud and then there are quiet parts inbetween. If you were to look at a waveform where you see how speech gets louder and quieter across time, the time between those peaks happens at a fairly predictable frequency of 3Hz to 8Hz across different languages.

“The same thing happens with the gelada ‘wobbles’ – the periodicity has the same frequently.” Dr Bergman said that this had not been seen in any other primates. He said the findings did not give a definitive answer as to how speech arose in humans, but they did at least show that a combination of “lip-smacking” and vocalisations could have been a viable step for speech evolution.

The researchers now want to see if there is any meaning behind the gelada’s calls. They believe that the primates, which live in very large social groups, are using the verbal exchanges to bond with each other, in a similar way to how humans might use small talk.