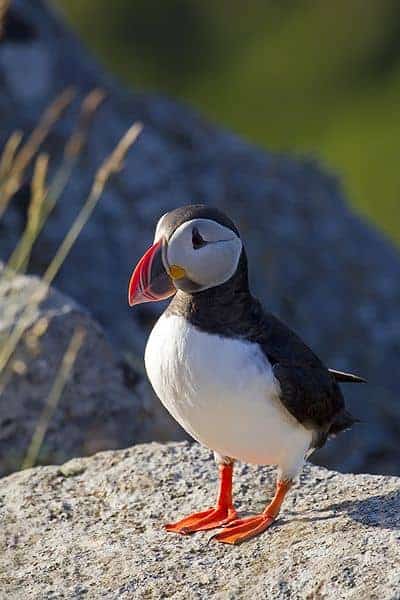 Puffins are rightfully dubbed the “clowns of the ocean” from their animated appearance, but sadly, they might instead serve as the “canary in a coal mine” warning us about climate change threats to the ocean.

The ocean is warming up in the Gulf of Maine from Massachusetts to Nova Scotia where ocean temperatures have hit a 150-year high, and these abnormally warm waters are altering marine food webs. Many fish species are moving into deeper and colder waters, and some are being replaced by fish from the south.The problem is that puffins are used to eating certain types of fish like herring, which are the perfect size for a small bird like a puffin. But herring and many other fish species are moving offshore into cooler waters, and the puffins are struggling to adapt.

Puffins were hunted down to just one breeding pair in Maine in 1901. From decades of successful conservation efforts, their population in Maine is back to roughly 2,000 birds. But this winter 40 puffins and hundreds of other birds washed up dead in Massachusetts apparently from starvation. Similar mass die-offs of puffins have been witnessed in Scotland, Iceland and Bermuda.

This is a sad, but poignant picture of what climate change will mean for many different types of marine wildlife. As climatic conditions change, feeding, breeding, migration and other patterns may be disrupted, and this can lead to massive die-offs.

To save puffins and other animals like them, we need to limit the impacts of climate change. Many bird species are at risk of extinction from climate change, and seabirds may particularly struggle from a combination of rising sea levels, more powerful storms and shifting food resources due to warming waters. The dead puffins are another indicator that the ocean is out of balance due to polluting emissions, and we need to aggressively shift to clean energy sources like offshore wind.

This article was written by Matt Huelsenbeck for Oceana.org

Warmer oceans also means greater incidents of oceanic storms. Poor little birds with almost nowhere else to go and no choices…unlike the humans who’ve created and exacerbated the problems with all our environment.

Warmer oceans also means greater incidents of oceanic storms. Poor little birds with almost nowhere else to go and no choices…unlike the humans who've created and exacerbated the problems with all our environment.