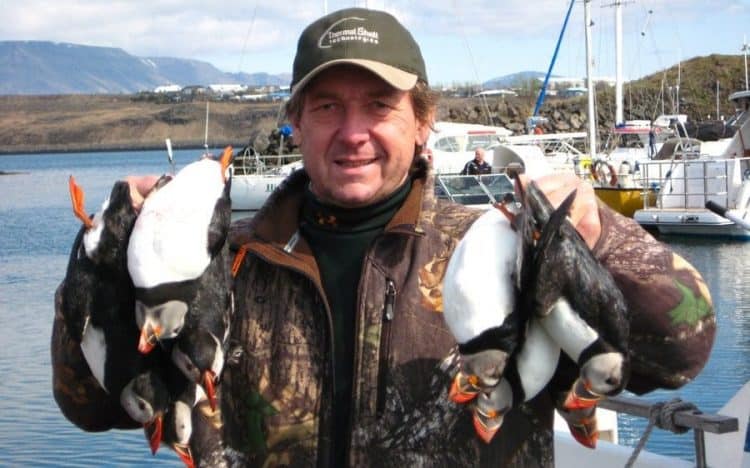 Puffins are being hunted 100 at a time by trophy collectors who are allowed to bring the carcasses back to the UK, despite the government’s efforts to save the species.Campaigners and MPs are calling on Theresa Villiers, the new environment secretary, to ban the import of puffin trophies and push the international wildlife trade body to give the charismatic bird stronger protection.

Websites offer grisly hunting trips for around £3,000, offering British people the chance to go to Iceland and kill a “bag” of puffins. The hunters boast of being able to shoot up to one hundred at a time.

The species was officially labelled “Endangered” in the 2018 “State of the World’s Birds” report. – but the birds are not listed for protection by CITES, the body regulating international animal trade.

This means they get no protection from over-hunting by CITES and there is no monitoring or official data for the number of puffin trophies taken.

The UK supports around 600,000 pairs of the burrow-nesting seabirds, around a tenth of the world population. Puffins are declining dramatically across the North Atlantic, including in the north of the UK. For example, in the last thirty years the Fair Isle puffin population has halved from 20,000 to 10,000 birds.

While the situation in the UK is improving, in countries with fewer protection for puffins including the Faroes and Iceland, where it is legal to shoot them, North Atlantic puffin populations are in steep decline.

With chronic breeding failure for over a decade in the worst affected colonies, Iceland’s puffin population has slumped from 7 million to 5.4 million birds .Dr Euan Dunn, the principal marine policy director at the RSPB, said: “it’s very important and concerning to know about puffins being exploited and traded in this way.”

He added: “In response to the conservation concerns around these much loved birds in the UK our efforts to protect puffins include cutting edge science to understand where and what they feed on, and direct interventions to remove invasive predators from islands to improve breeding success.”

The new environment secretary is being urged to help end the trade by pressuring CITES to list the bird – and banning British people from taking puffin carcasses home.

Eduardo Gonçalves of the Campaign to Ban Trophy Hunting said: “The puffin is now in danger of becoming extinct, and uncontrolled hunting has been identified as a leading cause. There should be an immediate moratorium imposed before it is too late.

“CITES keeps no data on how many puffins are shot for recreation or traded. It is incredible that such an iconic species has been forgotten by the international community.

“Next month’s CITES conference will see attempts to include giraffes, which have been similarly omitted, on its list of protected species. Britain should insist that puffins be added too.”

He added: “Personally I regard the whole practice as abhorrent. I don’t believe in trophy hunting at all for any species. I don’t think there is any excuse for it.

“I happen to be at the moment at least the leader of the UK delegation for the council of Europe where there are two at least Icelandic representatives and I will be discussing the issue with them and see what if anything can be done in Iceland.

“I believe there is much more tourism to be generated by preservation and conservation rather than by killing puffins.”

Conservative MP Henry Smith added: “We have seen a huge decline in puffins especially along the West Coast, it is extremely distressing to see that a much-loved bird is being killed as trophies in Iceland.

“We have a duty to protect this popular bird and the UK government should be doing all it can to end puffin hunting.

“I do think the CITES definition does need to be taken on board by the UK government and I’ll be doing what I can as co-chair of the Parliamentary Animal Welfare group.”

Animal rights campaigner and MP for Richmond Zac Goldsmith added: “Puffins might not have the profile of elephants or rhinos, but they are beautiful birds, which need our protection. It’s awful to think that people are paying money to kill them and then bring their carcasses back to the UK. I urge the Government to take a lead on protecting puffins – we should do all we can”.

Fellow MP Sir David Amess called on the UK government to “do all it can to end the barbaric shooting of Puffins in Iceland” ahead of the CITES meeting, adding: “Unfortunately, opportunities are still available today for Brits to travel to Iceland and shoot dozens of Puffins at a time. At the peak of hunting season in April, ‘tourists’ can use the 20 hours of daylight to contribute to the already drastic decline in the Puffin population, which last year saw the World’s Bird report classify the species as endangered.”

A Defra spokesperson said: “Puffins are one of the nation’s most iconic seabirds and, as with all wildlife, their protection is a high priority for this Government. It is an offence to kill, injure or take the birds or to take or damage their eggs and nests.

“We take the conservation of species seriously and work with organisations such as CITES to agree tough global guidelines to protect animals at risk.”

This article was first published by The Telegraph on 27 July 2019.