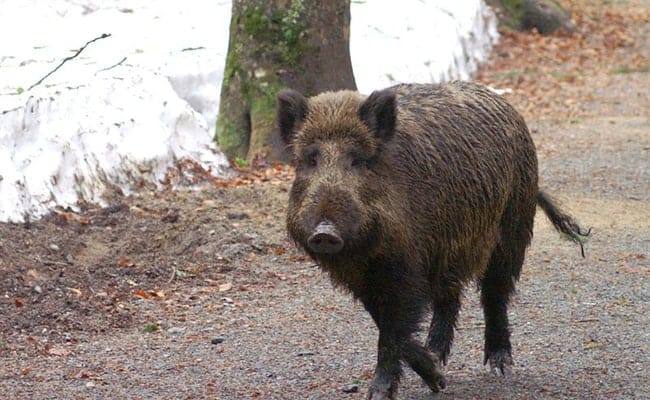 Thirty-one years ago, a plume of radiation spread across Europe with the Chernobyl meltdown, the most infamous nuclear disaster in history. Today, we think of Chernobyl as a historic event,as well as an instructive lesson in nuclear safety — and one that changed the face of nuclear power forever.

But it turns out we’re living with the legacies of the disaster today — and not just in the exclusion zone that surrounds the decaying remains of the facility.

In Sweden, dangerous levels of cesium-137 are showing up in wild boar, and that’s causing an unexpected problem: a booming population. Humans aren’t interested in hunting these game animals since they can’t eat the meat without first determining its safety.

And it’s not just Sweden, either: Radioactive boar menace Germany and the Czech Republic, and in Japan, pigs irradiated by Fukushima are causing a similar problem. The story of how — and what to do next — illustrates the complexities of living side-by-side with wildlife.

It turns out that cesium-137 tends to accumulate in the soil. Animals like deer and birds don’t absorb very much through their diets, while their comparatively short lives don’t give the compound a chance to build up, either. Boar, however, root into the soil for their food. They also eat mushrooms, which act like little sponges for cesium-137, allowing it to accumulate in the animal. In fact, mushrooms are so good at concentrating radioactive elements that some researchers view them as useful indicator species to track radiation levels.

In Sweden, the problem is compounded by the fact that the boars are moving north to regions more heavily affected by Chernobyl fallout.

High levels of radiation make boar meat unsafe to eat, discouraging hunters who might otherwise control the population, as they have for thousands of years. Instead, the animals continue to increase in number,destroying farmland and forests along the way. And while boars are a natural part of the ecosystem, when their numbers boom, it can be too much for the surrounding environment to handle.

Swedish farmers are concerned about losing crops to the roaming radioactive boars, and without hunters as a natural control, it’s time for a conversation about other methods. Often, communities facing invasive wildlife turn to poison,although it can be inhumane for the target species as well as other animals.

Is there a gentler alternative?

It turns out there is: If you want to control a population without resorting to lethal means, you have to stop the population from growing so numbers will stabilize — and that means birth control.

It just so happens that Britain, Italy and the United States have all explored the use of contraceptives for wild pigs. Figuring out a way to administer them effectively to a large population of rather unfriendly animals is another challenge — but it’s certainly better than killing boars because of their natural behavior.