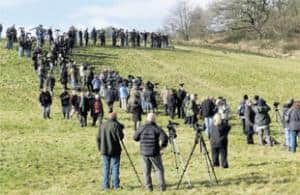 MORE than 1,000 birdwatchers flocked to a Newport field after a bird, rarely seen this side of the Atlantic, was spotted there.

A dog-walker spotted a yellow-throated warbler in a hedgerow on Friday morning and, after he posted a picture on the internet, birdwatchers from all over the UK travelled to the farmer’s field off Cwm Cwddy Drive, Rhiwderin.

The bird is indigenous to warmer parts of North America, such as Florida, and there have been ten previous sightings in the UK with this being only the second in Wales.

Gwent Wildlife Trust president Roger James said: “Word got out and there have been thousands of people here from places like Lincolnshire, Lancashire and Teeside. There were 400 people here on Friday alone.”

Birdwatchers formed an arc around the field with binoculars and cameras, primed to get a sight of the bird as it made its way through undergrowth.

Tom Bragg, 34, travelled from Devon and said: “The bird could have got lost when migrating during the winter. It would have been caught by a storm and blown across the Atlantic, a terrifying ordeal and something most do not survive.”

Richard Horton, 65 and Dave Baker, 49, left their Aldershot homes at 5am yesterday to travel to Newport.

“It’s very low down in the hedgerow feeding and resting, but it’s caused great excitement.”

He said: “We had to come, but I’ve travelled to Scotland before to see rare birds.”

This article was written and published by South Wales Argus