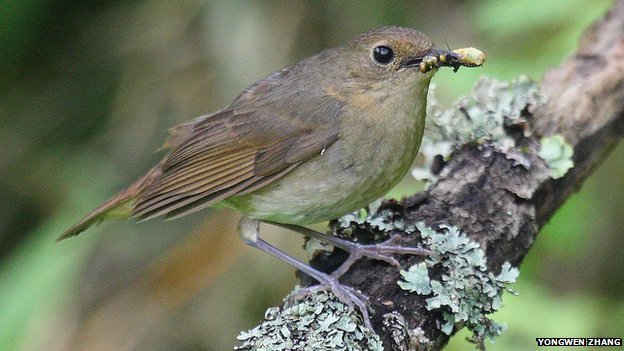 Crucial new discoveries about one of the world’s least-known and rarest birds have been made by scientists. The blackthroat, or blackthroated blue robin (Calliope obscura) is one of the world’s rarest “robins”, being known from only a handful of records since it was first described in the 1890s.

In 2011, experts resighted a small number of male blackthroats in China. But now they have sighted a female and a breeding pair, learning more about the robin’s behaviour. Details of the discovery are published in the Journal of Ornithology.

The species was first observed in 1886 in Gansu province, north west China.

In the late 19th and early 20th Centuries, about 10 individuals were collected at two locations in Shaanxi and Gansu provinces between May and August, during what was thought to the bird’s breeding season.

Since then, there have been very few records of the species, the bird being occasionally sighted in China and Thailand, with a few specimens appearing in markets that trade birds. The blackthroat is listed as Vulnerable by the International Union for the Conservation of Nature (IUCN) and almost nothing was known about its behaviour or breeding.

In a bid to relocate the bird, a team of scientists based at the Institute of Zoology at the Chinese Academy of Sciences, Beijing, visited six national parks in central China, targeting habitats they thought it might frequent.

In 2011, they documented 14 males, recording the bird’s distinctive song. Since then, they have managed to spot blackthroats, including a breeding female, on numerous occasions within three locations, as well as a nest with two chicks.

Many of the birds were found living in forests inundated with bamboo. In total, 58 adult blackthroats have now been observed since the species was first discovered in 1886.

Though “eight of these records, between 1931-2000, have no documentation, and can therefore not be verified,” cautioned Prof Per Alström from the Swedish University of Agricultural Sciences, Uppsala, a leading member of the research team.

As well as the two chicks most recently spotted, four recently fledged birds were sighted in 1886. The robin remains elusive, and the scientists admit they would not have noticed the birds had they not been singing.

“The song is beautiful and varied,” write the researchers in their latest description of the robin’s rediscovery. “It consists of short, varied strophes that are delivered at a fairly slow pace, with pauses of a few seconds between each strophe. Many strophes are rather simple and consist of a few whistled notes.”

The robin also appears capable of mimicking the sounds of other birds, including the grey-headed woodpecker, Chinese sparrowhawk, spotted nutcracker, and Eurasian jay.

Their studies have dramatically increased our understanding of the blackthroat. For the first time, the experts, led by Fumin Lei from the Chinese Academy of Sciences and Prof Alström, who is currently studying in China, confirmed what a female blackthroat looks like; being uniformly grey-brown, with a black bill and paler underside, characterised by a buffish-grey throat and breast.

The discovery of a breeding pair also confirmed that both parents care for their young, feeding their chicks flies, butterflies and other insects and arthropods. Blackthroats may be more common than previously thought, as the latest study discovered more individuals than had ever been recorded previously.

Its habitat may also be less threatened than feared. The Qinling Mountains in China are home to other enigmatic species, including giant pandas, golden snub-nosed monkeys and golden takins, a relative of the goats and antelopes, whose coat is said by some to be the source of the legend of the Golden Fleece.

This article was written by Matt Walker for BBC Nature.