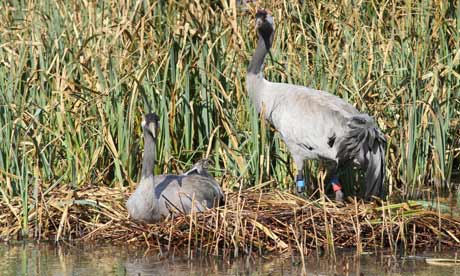 The first common crane egg laid in western Britain for more than 400 years has been given a round-the-clock guard.

The first common crane egg laid in western Britain for more than 400 years has been given a round-the-clock guard, conservationists said.

The nesting pair that produced the egg are part of the Great Crane Project, which has been rearing cranes in captivity since 2010 and reintroducing them to the Somerset Levels and Moors where they would have been found centuries ago.

The egg laid at a nest at the Wildfowl and Wetlands Trust’s (WWT) Slimbridge Wetland Centre is the first known to be laid by the project’s cranes, which were hand-reared at the centre and the oldest of which only reached maturity this year.

Once widespread in Britain, the species was driven to extinction as a breeding bird by hunting and habitat loss by 1600, although a small population has been established in the Norfolk Broads since 1979.

The public can watch the nesting pair from hides, and a long lens video link has been set up to give visitors to the wetland centre and online a close-up view.

The video cameras will also assist the guards protecting the egg against egg collectors. Egg collecting has been illegal in the UK for almost 60 years but a few people are still known to raid nests.

WWT’s Nigel Jarrett said: “Cranes are an iconic part of British wildlife and one that was all but lost for centuries.

“There is a long way to go before cranes become widespread again, but it is absolutely momentous to see this egg laid at Slimbridge.”

He added: “The parents of this egg were hand-reared here at Slimbridge and have thrived through their first three years on the wetlands of the Somerset Moors thanks to the help and support of the local community, particularly the farmers.”