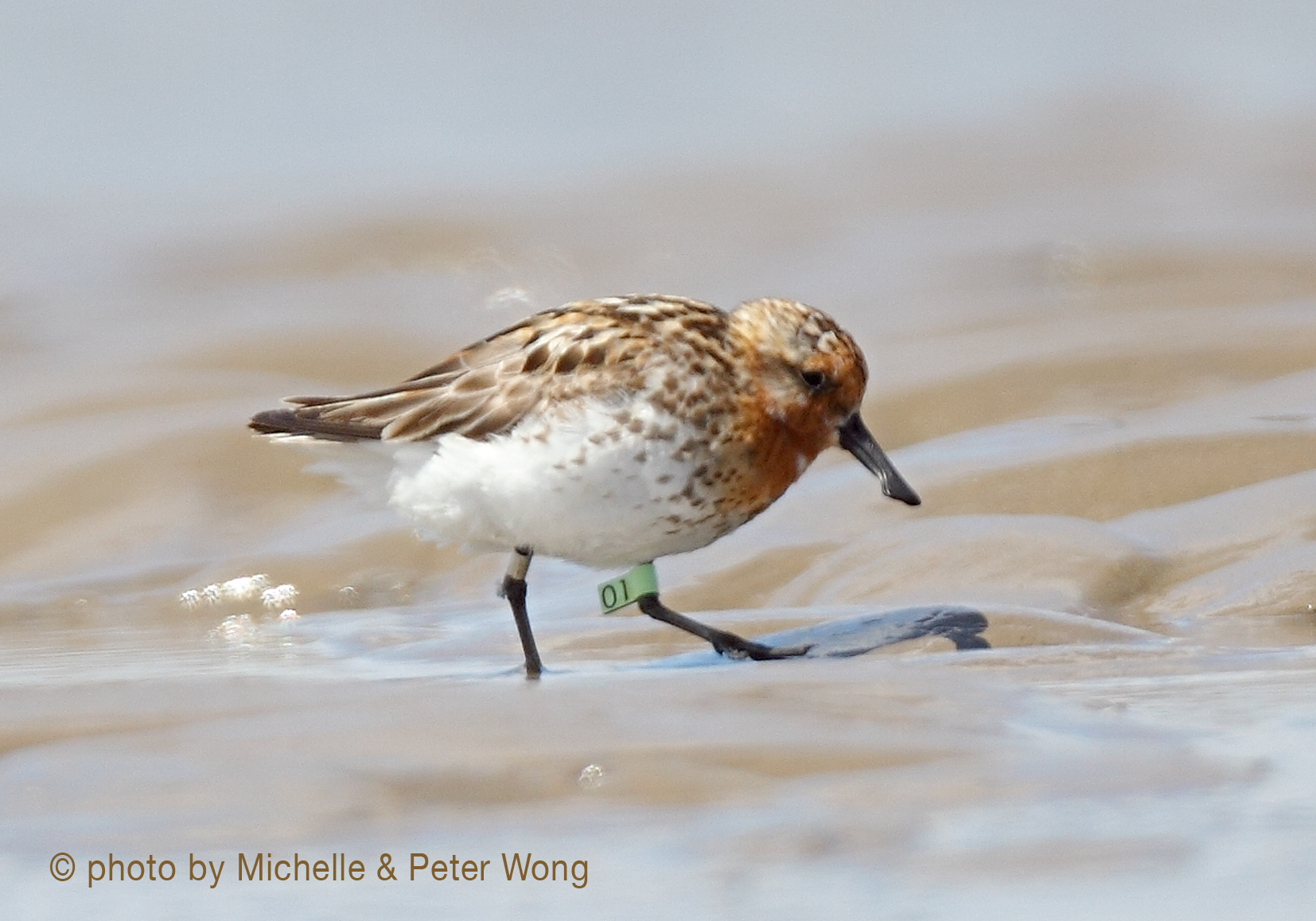 A rare sighting of a marked spoon-billed sandpiper on migration was reported last weekend from Rudong mudflats north of Shanghai. The critically endangered bird was identified by a lime green plastic flag on its leg marked ‘01’ that was attached by scientists from Birds Russia on its breeding grounds this summer.

Conservationists know that this bird ‘Lime 01’ fathered six fledglings this summer – three that were hand-reared by conservationists and three that he raised himself – which is 10 times the average for the species.

“The Rudong mudflats are an extremely important stop over site for the spoon-billed sandpiper to rest and feed and it is very exciting news that our Russian breeding birds have been sighted there. Unfortunately these mudflats, like much coastal wetland along the East Asian-Australasian Flyway, are threatened by the development. Alongside illegal trapping and hunting, it has pushed these birds to the edge.”

“This is why we’re taking extreme measures to prevent its extinction: hand-rearing chicks to boost numbers, but spoon-billed sandpipers rely on the help of so many people. Reports like this are only possible thanks to the support of birdwatchers throughout Asia and are an invaluable part of its conservation.”

Rudong mudflats are the most significant known staging post in China for spoon-billed sandpipers where 106 individuals were counted last year in October. Demand for land is high in the region, which is only 150km from Shanghai, and land has already been reclaimed from the marshes at Dongling to the southern end.

Pavel Tomkovich of Birds Russia, who caught and marked the bird with Nikolai Yakushev, said:

“When I marked “Lime 01” I wondered if anybody would ever see it on its travels, almost a quarter of the way round the world, as looking for spoon-billed sandpipers can be like looking for a needle in a haystack. Looking for marked birds is even more difficult as we were only able to mark eight adult birds with these unique flags. Thanks to the reports of local birdwatchers, we’re learning their stopover points.”

‘Lime 01’ was seen leaving the breeding grounds on 4 August and was seen 5,000km away at Rudong on 31 August. Spoon-billed sandpipers can cover as much as 1,000km per day, leaving around three weeks during which it may have been staging elsewhere.

“We’ve known for a few years that they stop at Rudong mudflats and we hope to be able to protect it. But our calculations indicate that ‘Lime 01’ probably stopped somewhere else for up to three weeks before reaching Rudong. We want to find out where that is in case it is under threat.”

Zhang Lin of the “Spoon-billed Sandpiper in China” Team said:

“The first Spoon-billed Sandpiper arrived at Rudong about two weeks ago since when I have been regularly scanning the increasing numbers of waders at the high tide roost at Rudong. When I glimpsed a bird on 31 August that looked like it had a lime green leg flag I knew something exciting was in front of me. On closer inspection it turned out to be ‘Lime 01’. I was over the moon as this is the first time that one of the birds marked in 2013 has been seen in China.

“It is amazing to see how these little but critically endangered birds are connecting our key sites along the flyway between Russia and China. They are very important as they allow us to track whether efforts to save the species are working.”

This article was written and published by the Wildfowl and Wetlands Trust.