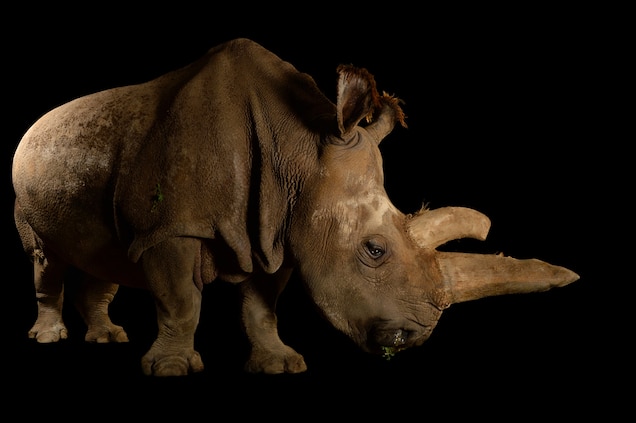 A northern white rhinoceros named Nabiré died Monday at a Czech zoo, leaving only four of the subspecies alive in the world. Their outlook is bleak: Only one male remains, and at 42 years old he can no longer breed.

The 31-year-old female died at the Dvůr Králové Zoo after suffering complications from the rupture of a large cyst, according to a zoo statement. White rhinos are thought to be able to live up to 40 or 50 years.

“It is a terrible loss,” zoo director Přemysl Rabas said in the statement. “Her species is on the very brink of extinction.”

The remaining animals, all captive, include a female at the San Diego Zoo and two females and a male at Kenya’s Ol Pejeta Conservancy.

Rhinoceros populations in both Asia and Africa have suffered for decades due to poaching, which is spurred mainly by demand for their horns as a key ingredient in many traditional Asian medicines, according to the nonprofit group WWF. Habitat loss is also a factor in their demise.

The northern white rhinoceros subspecies was once robust throughout central Africa, with populations ranging from southern Chad to the Democratic Republic of the Congo. Their numbers declined precipitously from more than 2,000 in 1960 to only 15 individuals by 1984.

Like their northern relatives, the southern white rhino went through previous periods of decline, and only a handful remained at the turn of the century, says Kathleen Garrigan, spokesperson for the African Wildlife Foundation, a Washington, D.C.-based group that works to protect African animals. (See “1,000+ Rhinos Poached in 2013: Highest in Modern History.”)

Conservation efforts by the South African government have helped the subspecies rebound to a healthy population of around 20,000. Those efforts include breeding and relocating rhinos, as well as allowing controlled sport hunting, which has encouraged landowners to care for the rhinos, she says.

But the northern white rhino has not been so lucky. The subspecies “disappeared right in front of our eyes,” says Garrigan, “and we didn’t realize it until it was too late.”

Nabiré was one of only four northern white rhinos ever born in captivity, and efforts to breed more animals have been challenging.

Natural breeding is no longer an option, as three of the remaining northern whites are elderly and one has uterine conditions that make it unlikely she could carry a calf. So in-vitro fertilization in the lab remains one of the last hopes for the subspecies. (See “Death of Rare White Rhino Leaves 5 in the World.”)

During her life, Nabiré suffered severe uterine cysts, and scientists made one unsuccessful attempt to harvest her eggs from her healthy left ovary while she was alive.

Zoo experts removed that ovary immediately after her death and transported it to a specialized lab in Italy for further research and reproductive work.