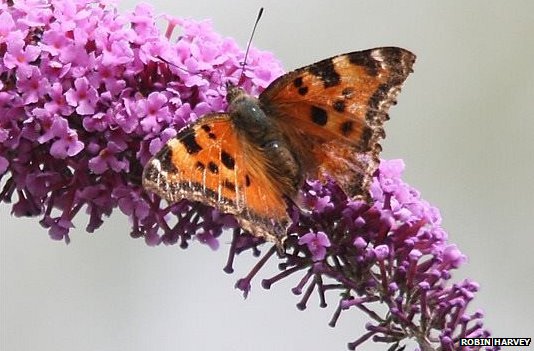 A butterfly last seen in the UK more than 60 years ago has been spotted in parts of East Anglia. The yellow-legged tortoiseshell, also known as the scarce tortoiseshell, was seen at RSPB Minsmere, Suffolk. Additional sightings have since been reported in Norfolk, Suffolk and Essex, said Butterfly Conservation.

Experts believe the butterflies, usually found in eastern Europe, have arrived from Holland, where they have recently been seen in large numbers.

Ian Barthorpe, from RSPB Minsmere, hosts of the BBC’s Springwatch, said: “The excitement began on Monday when our senior site manager called to say that he thought he had a large tortoiseshell butterfly in his garden.

“This was potentially a first reserve record of this rare migrant, which used to breed in the UK, so a handful of us rushed to take a closer look.

“Sure enough, sitting on the bungalow guttering was an unusual tortoiseshell butterfly – slightly larger and paler than the familiar small tortoiseshell, with a slightly different upperwing pattern.

“We were able to confirm the identification as yellow-legged tortoiseshell, also known as scarce tortoiseshell.”

The large, dramatically coloured butterfly with distinctive yellow legs, measuring 6cm (2in) across its wingspan, is found from eastern Europe to China and Japan.

Butterfly Conservation, a charity which helps threatened species of butterflies and moths, said the recent sightings in East Anglia had prompted speculation that the butterfly may be attempting to colonise the UK.

Richard Fox, from the charity, said the yellow-legged tortoiseshell was “an incredibly rare migrant butterfly” which had “only reached Britain once before, in 1953”.

“Over the past week, however, a major immigration of this eastern European species has taken place westwards through the Netherlands and across the Channel,” he said.

This article was first published by BBC News Suffolk.