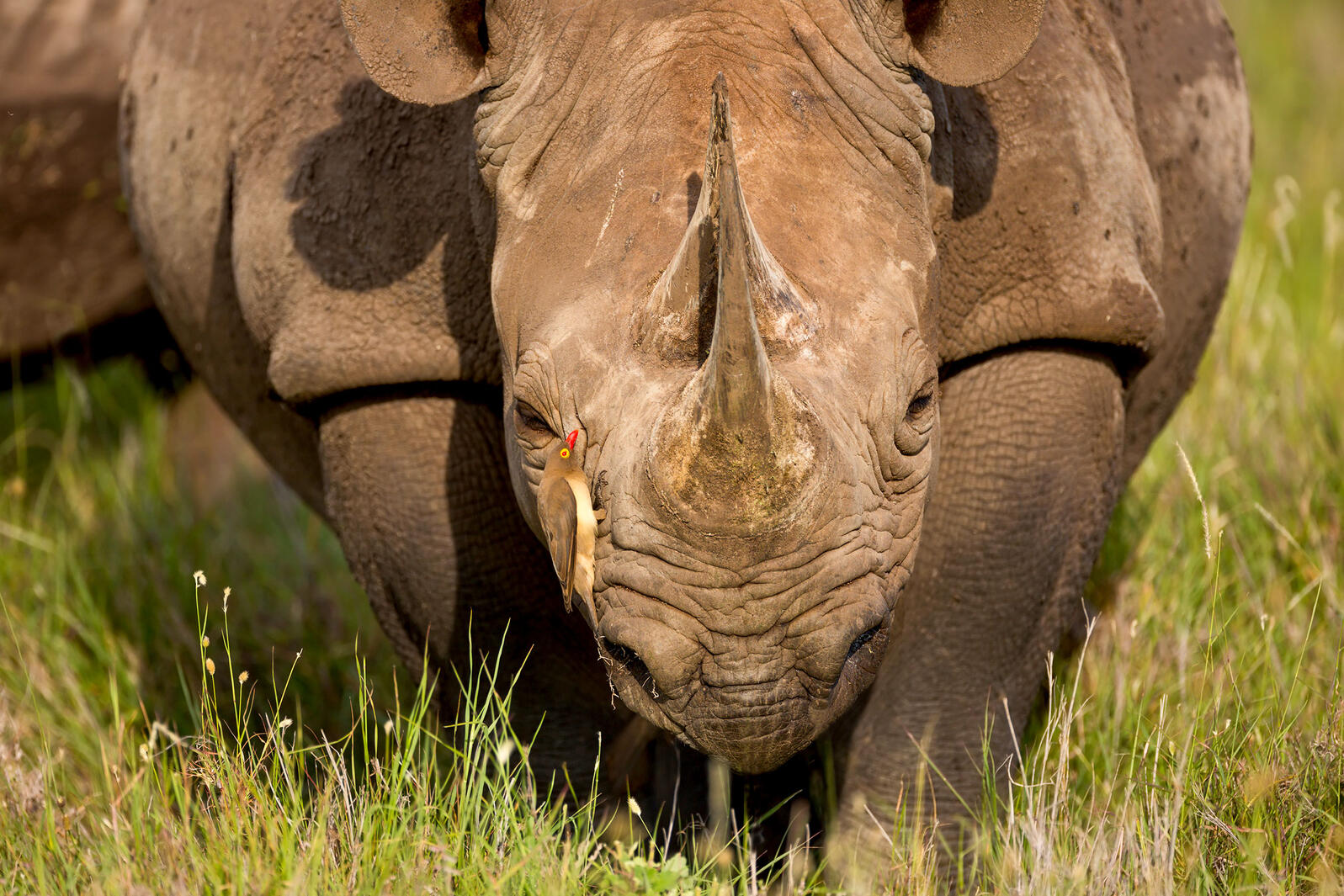 There’s long been a debate over whether Red-billed Oxpeckers earn their keep. As their name suggests, these common birds of Africa’s open lands like to hang around with domestic cattle and many large, wild mammal species. They eat ticks and other pesky parasites clinging to their hosts. Less helpfully, they also sometimes peck at wounds on mammal bodies and drink their blood.

“I wondered about the parasitic versus mutualistic nature of the oxpecker-host relationship,” says Roan Plotz, a behavioral ecologist at Victoria University in Australia. In particular, Plotz was intrigued by another name for the species: Askari wa kifaru, which means “the rhino’sguard” in Swahili. In a recent paper in the journal Current Biology, Plotz and colleagues report that it’s a fitting name, and the behavior it describes burnishes the bird’s credentials as a help to their hosts.

Anecdotes and folklore told the research team the bird’s hissing call acts as a warning when other animals—including human hunters—are approaching. In studies conducted in South Africa, they found that rhinos without oxpeckers on their backs only noticed an approaching human 23 percent of the time, whereas those carrying the birds detected the nearby person 100 percent of the time, and from much farther away than those attentive rhinos without oxpeckers to warn them.

While some mammal species team up with fellow four-leggeds to avoid mutual predators, such as zebras and wildebeests, black rhinos are solitary creatures. They also have poor vision. “Although black rhinos have large, rapier-like horns and a thick hide, they are as blind as a bat,” Plotz says.

“If the conditions are right, a hunter could walk within five meters of one, as long as they are downwind.”That vulnerability to poaching has left the species critically endangered, making the oxpecker’s alarm call especially valuable.

Although Red-billed Oxpeckers remain widespread and abundant, their numbers have dwindled, likely due to pesticides, the researchers report,and they’ve been extirpated from some areas. Most black rhinos now live in areas without oxpeckers.

Plotz and his co-authors suggest that reintroducing the birds where black rhinos live could help the host species rebound from its current count ofjust over 5,000 worldwide.

The “rhino’s guard” is far from the only bird that maintains a mutual relationship with mammals. Here are four more mammalian-avian alliances.

Like oxpeckers, Cattle Egrets, which are found worldwide in open rangelands, from wild meadows to managed pastures, are also reliable for pest control. But this white wading bird’s name is slightly misleading, as they are known to follow not just livestock but many types of large grazing animals, from gazelles to elephants. In return for munching on disease-causing ticks and lice, the egrets round out their diet with tasty insects such as crickets and grasshoppers that their sizable mammal hosts flush out as they graze.

Another long-studied mutual relationship exists between sub-Saharan hornbills and mongooses. In Kenya’s Taru desert region, two hornbill species, Von der Decken’s and Eastern Yellow-billed, form foraging colonies with dwarf mongooses. Together, the hornbills and their carnivorous mammalian allies locate and dine on insect colonies, both being especially fond of termite mounds. Because birds of prey target mongooses and hornbills, the two further benefit from one another’s watchful eyes and verbal calls that warn of an encroaching predator.

Several birds that inhabit Brazil’s wetlands eat well by keeping herbivorous mammals, such as capybaras, clean of disease-carrying pests. Shiny and Giant Cowbirdsas well as Wattled Jacanas have been observed acting in ways that seem mutually beneficial to the enormous furry rodents, which typically live near water, carry ticks, and attract blood-thirsty flies. The sight of a tropical wading bird or songbird on the back of a capybara might seem charming—and it is—but it’s also another of the numerous examples of mutualism that prove cleaner birds are getting more than a free ride.

This unusual alliance is the only known example of wild birds assisting humans. Among other birds, Greater Honeyguides are known for their troublesome parasitic behavior of colonizing other species’nests. By comparison, their relationship with humans is a uniquely complementary arrangement. When members of Mozambique’s Yao community want to go hunting, they make a simple but effective brrr-hm noise to alert their avian partners. The honeyguides then do just as their name suggests: They lead human hunters to wild beehives. After humans smash the hives and gather the honey, the birds feast on the high-calorie larvae and beeswax.