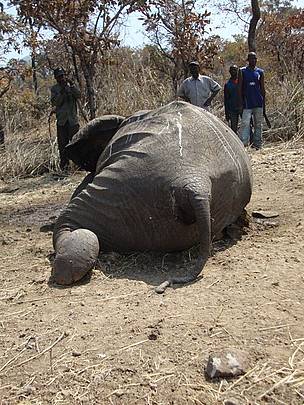 It has been two weeks since the Cameroon government authorized a military intervention at the site of the slaughter of hundreds of elephants.WWF is disturbed by reports that the poaching continues unabated in Bouba N’Djida National Park and that a soldier’s life has been lost.

The forces arrived too late to save most of the park’s elephants, and were too few to deter the poachers.It is likely that at least half the population of Bouba N’Djida’s elephants has been killed.

WWF is seeking a concrete assurance from Cameroon President Paul Biya that he will do whatever is necessary to protect the remaining elephants in Bouba N’Djida, and to bring the killers to justice. We expect those detained to be prosecuted for violating Cameroon’s territorial integrity with deadly weapons in order to kill elephants for their ivory. All those convicted of involvement in wildlife crime must be sentenced to the full extent of the law.

Read full article, which was written and published by WWF Global