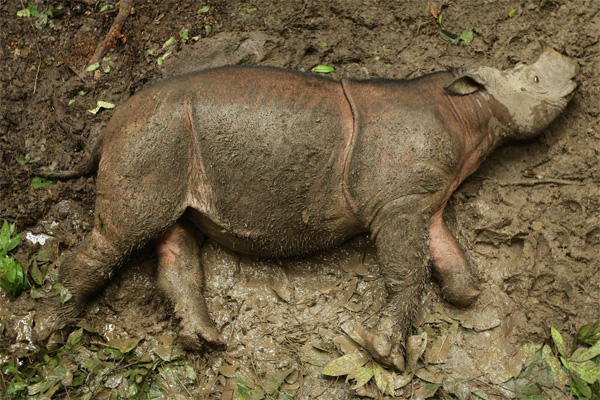 A new study argues for treating endangered Sumatran populations in Borneo and Sumatra as “a single conservation unit”, lending academic support to a controversial proposal to move wild rhinos from Malaysia to Indonesia.

The paper, authored by an international team of rhino experts and published in the journal Oryx, says that genetic differences between the island populations are minimal. Given the dire straights of the species — the wild population is estimated at less than 100 individuals — the researchers argue that ensuring the Sumatran rhino’s survival takes precedence over preserving what little genetic diversity remains between populations.

“In our paper, we discuss the pros and cons of considering the populations of Sumatran rhinoceros from Sumatra and Borneo as a single management unit,” said study lead author Benoit Goossens, Director of the Danau Girang Field Centre in Malaysia, in a statement. “For a species such as the Sumatran rhinoceros, where time is of the essence in preventing extinction, we must ask to what extent should genetic and geographical distances be taken into account in deciding the most urgently needed conservation interventions.”

“Genetic differences are minimal and we strongly believe that the observed differences do not justify keeping the Sumatran and Bornean populations as separate management units.”

Goossens pointed to the situation with the Javan rhino as an example of the pitfalls of prioritizing genetic diversity over conservation for a species that is so close to extinction.

“Despite clear results demonstrating that the Ujung Kulon (Indonesia) and Cat Tien (Vietnam) populations represented separate evolutionary significant units it was argued that demographic considerations should override genetic issues in the short term. The Indonesian and Vietnamese governments were urged to exchange Javan rhinoceroses before it was too late. No action was taken and, in Cat Tien National Park, the last individual in Vietnam was found dead in April 2010,” Goossens said. “We certainly do not want the same thing to happen to the Sumatran rhinoceros and we therefore strongly recommend to act now and exchange gametes such as semen and ovocytes (and possibly individuals) between the captive populations of Sumatran rhinoceros in Sabah (Tabin), Sumatra (Way Kambas) and Cincinnati Zoo, when it is still possible.”

The paper comes less than two months after conservationists meeting at the Sumatran Rhino Crisis Summit in Singapore agreed on a similar course of action.

The population of Sumatran rhinos has declined precipitously in recent years and is now estimated at less than 100 individuals scattered across forests in Sumatra and Borneo. While habitat loss and poaching have historically been the biggest threats to the species, today the largest challenge for wild Sumatran rhinos may be in finding a mate since population densities are so low. Therefore some conservationists believe aggregating rhinos in reserves that are strictly protected may be the best hope for the species. Efforts to facilitate breeding might also be necessary to accelerate the rhino’s recovery, according to some experts.

“With a species so close to the edge, extinction is guaranteed without two essential elements of human effort. One is to have full and open collaboration between the relevant governments, so that decisions are made on the basis of best scientific advice rather than on nationalism or pride. I think such an intent was achieved at the Summit,” said study co-author John Payne, executive director of the Borneo Rhino Alliance (BORA), which conceptualized and organized the summit with a dozen other groups involved in rhino conservation. “The other is that all possible advanced reproductive technologies are used to boost rhino births, and that we do not just rely on natural breeding, which will be too slow to halt the trajectory towards zero rhinos.”

Laurentius Ambu, director of the Sabah Wildlife Department, said that Malaysia is already considering transferring a young captive male rhino to the United States to breed with a female at the Cincinnati Zoo.

“We understand the need to exchange gametes between countries, Malaysia and Indonesia. Actions to initiate genome resource banking and artificial insemination or in vitro fertilization are underway in Sabah and elsewhere,” he said in a statement. “We are seriously considering sending Tam, our captive male rhinoceros, to Cincinnati Zoo in the US to breed with their mature female. By doing so, we will make an historical step towards the survival of one of the most charismatic, ancient and enigmatic large mammals; a species that Sabah is not prepared to see extinct!”