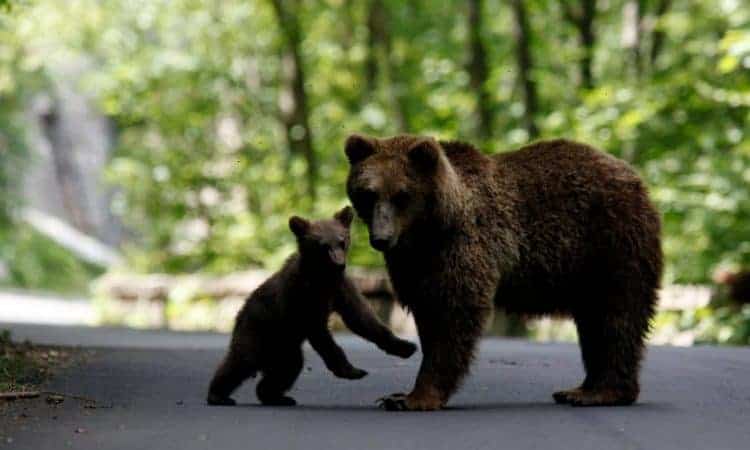 Romania has banned all trophy hunting of brown bears, wolves, lynx and wild cats in a surprise decision that gives Europe’s largest population of large carnivores a reprieve from its most severe and immediate threat.

The move on Tuesday reverses a trend which has seen the number of large carnivores being shot by hunters grow year on year since Romania’s accession into the European Union in 2007. In 2016, the largest hunting quotas yet gave hunters the mandate to shoot 550 bears, 600 wolves and 500 big cats over 12 months.

Over the last decade, hunting has grown into a multimillion-euro industry in Romania, with hunters from all over the world paying up to €10,000 (£8,800) to claim a ‘trophy’ – hunting parlance for the carcass of a hunted animal – from the Carpathian mountains.

The government has claimed that in order to exist, the industry relies on a loophole in European law which allows for the culling of wild animals that have been proven to be a danger to humans. Under the habitats directive, all large carnivores are protected in European Union member states, yet the state can order the killing of specific animals if shown to have attacked a person or damaged private property.

“Hunting for money was already illegal, but it was given a green light anyway,” environment minster, Cristiana Pasca-Palmer, told the Guardian. ‘The damages [clause in the habitats directive] acted as a cover for trophy hunting.”

Each year, hundreds of hunting associations across the country would submit two numbers; the total population of each large carnivore species, and the total number which they believed to be likely to cause damages. The second number would then act as a basis for a government-issued hunting quota for each species. These quotas were then carved up between hunting companies and sold as hunting rights to the public.

“This method raised some questions,” says Pasca-Palmer. “How can hunting associations count how many animals are causing damages a priori – before the damages have happened? By introducing the ban, what we are doing is simply putting things back on the right track, as the habitats directive originally intended.”

Wildlife NGOs claim that the methodology also tended to dramatically overestimate the populations of large carnivores. The official figure for the number of bears in Romania is over 6,000, and for wolves is 4,000. Yet with hundreds of hunting associations each responsible for monitoring a small area of land, and animals prone to wandering, it is understood that individual animals were often counted multiple times, potentially pushing the total population statistics up by thousands.

Announced late on Tuesday evening, the ban is expected to divide Romania’s population, pitching rural and urban dwellers against each other. The government’s decision has strong support in the larger cities, which have seen a growing movement against hunting in recent months. But in much of Romania’s remote countryside large carnivores are a daily threat to villagers and a persistent nuisance to livestock farmers, and many see hunting as the only solution.

Csaba Domokos, a bear specialist with wildlife protection NGO Milvus group, is convinced that the success or failure of the hunting ban rides on the government’s ability to address the rural population’s fears.

“Damages caused by large carnivores are a very real concern in the countryside,” he said. “The system up until now did not work; hunting does not reduce conflicts between carnivores and humans; in fact many studies show that with wolves and large cats, it can actually increase the problem.

“But the rural population believe that hunting is the answer, and unless they can be convinced otherwise, people may well start to take the problem into their own hands. The ban is a great step, but we don’t want hunting to be replaced by poaching.”

Domokos points out that hunters also have a vested interested in the protection of their quarry. “To some extent, hunting acts as a financial incentive for wildlife management, from preventing poaching to conserving habitats. There is some concern that once you take that away, the government will not invest enough to replace it.”

The government’s response is to take management into its own hands. A special unit is to be set up within the paramilitary police force that will assess any reports of damages by large carnivores and deal with the culprit animal directly. The ministry of environment have discussed the possibility of relocating the target animals abroad to countries interested in ‘rewilding’.

The ban comes amid a growing push for the protection of Romania’s wild mountains that has seen anti-corruption officers convict dozens of foresters, hunters and local officials in recent years.

Gabriel Paun, an activist and conservationist behind a petition that collected 11,000 signatures in the weeks before the hunting ban, sees the government’s decision as a step towards a safer future for Europe’s wild spaces: “The Carpathian mountains are home to more biodiversity than anywhere else in Europe, but for too long they have been ruthlessly exploited for forestry and hunting. Let’s hope the government’s decision is a sign of things to come.”

This article was first published by The Guardian on 05 Oct 2016.

If such a supposedly backward country can make such a step, it should be an easy one for the oh-so far developed countries.

that’s great. I hope they do not create “problem animals” again, to shoot them again, like before