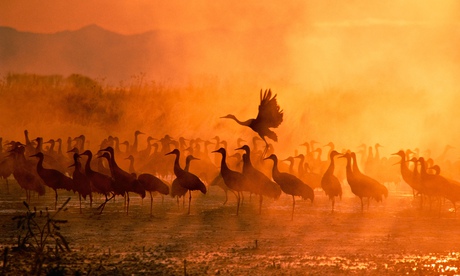 Nebraska is all of a flutter. Over the coming month, more than half a million sandhill cranes will descend on the plains of the midwest where they’ll take a breather en route to their breeding grounds in the north. Roosting on the Platte river at night, they take to the wing at sunrise and fill their stomachs with grain from the plentiful cornfields before returning to the banks as the sun sets replete with some much-needed calories for the onward journey.

It’s a well-earned break. By the time they touch down in Nebraska, the cranes will have undertaken an epic journey from their wintering grounds in Mexico and the southern states, covering about 200-400 miles a day. And with the breeding grounds of some subspecies as far flung as Hudson Bay and even eastern Siberia, the journey for many is far from over.

Returning to “stage” along the same stretch of the river each year, the weary travellers are not only sure to find food and a spot to sleep, but also the chance to find a partner for life. With 80% of North America’s sandhill cranes congregating along the river, the odds are good for the singletons; by the time the birds head off in early April, many will have found a mate.

Sporting grey plumage, white cheeks and a jaunty splash of red above their beaks, these handsome birds make for quite a spectacle as they strut their stuff along the river. And joining them are hundreds of enthusiasts who flock to the region every spring, armed with binoculars and cameras to catch sight of the phenomenon.

For those on the wrong side of the pond, there’s no need to get in a flap at the thought of missing out – an online “crane cam”, located at the Rowe Sanctuary on the edge of the Platte river, provides a remote glimpse of the action.

Just go to rowe.audubon.org/crane-cam to have a gander.

This article was written by Nicola Davis for The Guardian.