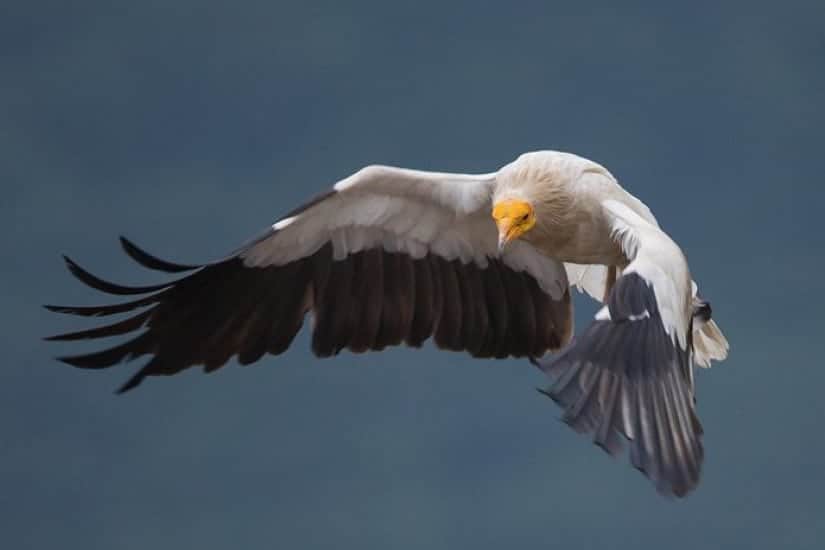 As part of the EU LIFE+ project ‘The Return of the Neophron’, a public consultation exercise on its proposed ‘Flyway Action Plan’ (EVFAP) has been launched to save the Egyptian Vulture. Stoyan Nikolov explains how – and why – citizens should take this opportunity to participate and have their say.

There was a time when the striking silhouette of the Egyptian Vulture in flight cut an impressive figure through the skies over Europe, Africa and the Indian sub-continent. Now, it is listed a globally ‘endangered’ species by the IUCN Red List. The overall European population has decreased by 50% over the last 50 years, while in the Balkans, numbers have declined by 80% over the last three decades and the prospect of extinction is a very serious risk.

Egyptian Vultures from the Balkans are long distance migrants wintering in the Sahel zone of Africa, and these annual return flights are highly perilous. They have to negotiate a veritable gauntlet of challenges: electrocution by power lines and poisoned baits aimed at mammalian carnivores.

And so, in 2015, the EU LIFE+ Project ‘The Return of the Neophron’, in collaboration with the Coordinating Unit of the CMS Raptors MoU[1], initiated the development of an Egyptian Vulture Flyway Action Plan (EVFAP). As birds know no borders, the plan involves a high degree of international cooperation between countries that host breeding populations (the Balkans, Central Asia and the Caucasus), flyways (the Middle East) and wintering grounds (Central and Eastern Africa). It is hoped that, by improving the conservation status of the species throughout the flyway, the Egyptian Vulture can soar back, first from ‘endangered’ to ‘vulnerable’ and eventually to up to stable numbers of breeding pairs across its entire range.

The proposed Flyway Action Plan looks at how to counter these threats concretely and identifies key additional needs to bring the species back from the brink: long-term research and monitoring; designation of protected areas; building conservation capacity; improving exchange of information; enhanced coordination of NGO-driven initiatives; partnerships with industry (e.g. energy, agriculture); and, improving awareness-raising and publicity.

The entire process has been remarkably collaborative and inclusive from the get go. It is vital that the people – be they government officials, private sector representatives (from power companies for example), conservationists or simply concerned citizens – who share their homelands with these magnificent raptors, see and understand just what is at stake and actively take part in saving a priceless part of their natural heritage. This is why, today, Raptors MoU has launched a month-long public consultation exercise on its draft Flyway Action Plan and has published the plan online in English, French and Russian.

The consultation opened yesterday and runs until 20 February 2017. All comments will then be reviewed and, where appropriate, integrated into the final (new and improved) version of Action Plan in March which will be implemented over the next ten years.

Stoyan Nikolov (BSPB/BirdLife Bulgaria) is coordinating the development of the Egyptian Vulture Flyway Action Plan. If you have any questions, please contact him via e-mail or telephone (+359 878 599372).You can also visit theLIFE+ Neophron website.

[1] CMS Raptors MoU (The Memorandum of Understanding on the Conservation of Migratory Birds of Prey in Africa and Eurasia) is an international, legally non-binding agreement to protect migratory birds of prey. Its Egyptian Vulture Flyway Action Plan (EVFAP) will form a key component of the wider ongoing Multi-species Action Plan to Conserve African-Eurasian Vultures (Vulture MsAP).

This article was first published by BirdLife International on 24 Jan 2017.