It relies on the right type of winds to make this epic journey – winds that computer models indicate could become less favourable in the future. But scientists say the godwit’s ability to judge weather conditions means it should rise to the challenge.

“They are very adept and savvy about when to leave Alaska, in being able to pick times when the atmospheric conditions are favourable for the journey to New Zealand – when there are good tailwinds,” explained David Douglas, a wildlife biologist with the United States Geological Survey in Anchorage.

“We don’t feel that we see enough change that we should be concerned that they won’t have the opportunities to complete the migration as magnificently as they do now. “We can raise other questions about the quality of their feeding grounds and things that they need to fuel on to make the migration – are they going to be intact and available? Those are entirely different kinds of questions.

“But as far as atmospheric circulation is concerned, at least in terms of the winds, we don’t see a train wreck coming.” Mr Douglas was speaking in San Francisco at the American Geophysical Union (AGU) Fall Meeting, the world’s largest annual gathering of Earth scientists.

He has been investigating the future prospects for the bar-tailed godwit (Limosa lapponica baueri), famed for its extraordinary annual odyssey.

The bird leaves New Zealand in March to fly some 10,000km to feeding grounds in China and the Koreas. And then in May, the godwit undertakes a 6,000km trip to western Alaska to breed and nest, before returning directly to New Zealand across the Pacific in August/September.

It is this final leg that amazes biologists.One celebrated godwit, known as E7, was recorded by satellite tag in 2007 to have covered 11,500km in eight days. 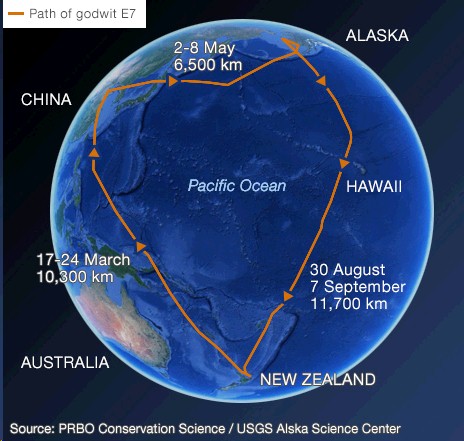 But Mr Douglas has been wondering how the godwit might fare in a changed climate that also alters wind patterns in the Pacific. Working with colleagues at the University of Illinois at Urbana Champaign, the team has modelled atmospheric circulation conditions towards the end of the century.

At the moment, the bird makes use of tailwinds on the backsides of low-pressure systems passing across the northern Pacific. The research found these systems in future will likely more north, and that, on average, what the scientists call the net tailwind index will show some degradation.

In other words, there will probably be fewer opportunities when conditions are optimum.

But tagging studies have demonstrated also that the godwit seems to have a knack of picking the optimum moment whenever it does arise.

“Our empirical studies have clearly shown that these birds don’t depart on random,” said Mr Douglas.

“They’re very good at cuing in on when the conditions are just right. And so when we look at these modelled runs and the variability in the available windows, we see there are still ample opportunities for them to pick good windows of time to make this migration, despite the overall mean being reduced.”

The energy required to fly non-stop for thousands of kilometres is huge. This leads to the godwit taking on an enormous fat store before setting out on its marathons. And if there is concern about the bird’s current or future status, then it relates to this fuelling phase and the fact that some of its feeding grounds are being diminished.

In China and South Korea, for example, recent years have seen increasing reclamation of the tidal mud flats where the bird forages.

This article was written by Jonathon Amos for BBC News Science and Environment.

Good to remember that birds have been around MANY millions of years longer than mammals and some of why that's been so!