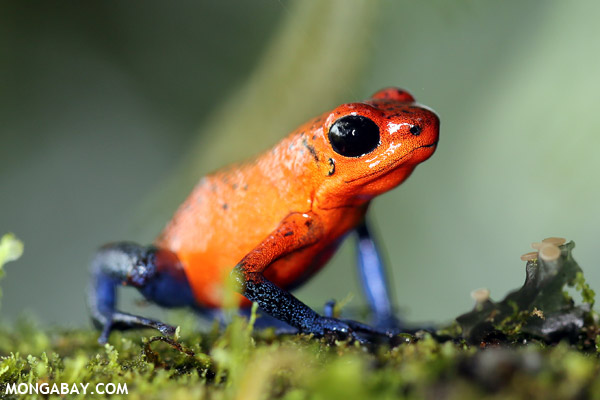 New technology makes it possible to automatically identify species by their vocalizations. The software and hardware system, detailed in the current issue of the journal PeerJ, has been used at sites in Puerto Rico and Costa Rica to identify frogs, insects, birds, and monkeys. Many of the animals identified by the system are typically difficult to spot in their natural environment, but audio recordings of their calls reveal not only their presence but also their activity patterns.

The platform, which is called the Automated Remote Biodiversity Monitoring Network (ARBIMON), could potentially allow scientists to monitor species in remote sites without having a physical presence on the ground, according to the study’s lead author Mitchell Aide of the University of Puerto Rico.

“To understand the impacts of deforestation and climate change, we need reliable long-term data on the fauna from around the world,” Aide said. “Traditional sampling methodology, sending biologists to the field, is expensive and often results in incomplete and limited data sets because it is impossible to maintain biologists in the field 24 hours a day throughout the year, and it is impossible to clone expert field biologists, so that they can monitor various sites simultaneously.”

Study co-author Carlos Corrada-Bravo, also of the University of Puerto Rico, says the technology enables experts to leverage their knowledge and test hypotheses on a broader scale in the field.

“We are not trying to eliminate the biologist,” said Corrada-Bravo. “On the contrary, we are trying to provide the best data and tools possible, so that the biologists can use their time to convert these data into useful information for science, conservation, management, and education.”

Corrada-Bravo added that because the data is stored for perpetuity in an online repository, it can be used by future generations of scientists.

“Each recording is the equivalent of a museum sample, which can be analyzed with the knowledge and technologies we have today, but which will be permanently stored so that biologists 20 or 50 years from now, will be able to analyze these recordings with new technologies and ideas.”

ARBIMON utilizes both software and hardware, including a solar powered remote monitoring station. A statement from the University of Puerto Rico explains:

The hardware, which utilizes cheap and easily obtainable components such as iPods and car batteries, records 144 one-minute recordings per day in remote sites and sends them in real-time to a base station up to 40 km away. The recordings are then forwarded to the project server in Puerto Rico where they are processed and made available to the world through the internet in less than a minute. The system was tested in Puerto Rico and Costa Rica, and today, anyone with an internet connection can view and listen to more than 1 million recordings from these and many other sites such as Puerto Rico, Hawaii, Arizona, Costa Rica, Argentina, and Brazil (via http://arbimon.com). To automate species identification, the group developed a web application which provides users with tools to train the software to automate species identification, along with other tools for measuring the accuracy and precision of the model. Once the biologist has developed a reliable model, the computer can process more than 100,000 recordings in less than an hour, providing information on species presence and absence.

ARBIMON could potentially augment other emerging conservation-oriented technologies. For example, Rainforest Connection, a San Francisco-based organization working in the Sumatran rainforest, recently installed units that listen for gunshots and chainsaws. Any noises that match those audio signatures trigger an alert that is relayed to a local authority, enabling real-time enforcement action. Rainforest Connection’s units, which are built from used Android phones, could be tuned to listen for specific animal calls — even warning vocalizations that could signal a poaching threat.

“ARBIMON’s commitment to openness is truly exciting,” Rainforest Connection founder Topher White told mongabay.com. “In the future, the data generated by our units could potentially be integrated with ARBIMON’s library for a given region, allowing us to track animal alarm calls, and help authorities to intervene in wildlife poaching in real-time.”

Meanwhile, Conservation Drones, which combine mapping software with specially-outfitted model airplanes and helicopters, are being used for a range of applications, including monitoring, data collection, high resolution mapping. Lian Pin Koh, a researcher who has pioneered conservation drone development in recent years, says a drone’s ability to deliver payload to remote areas might have some utility for ARBIMON.

“A miniaturized version of the ARBIMON system could be delivered by a drone to inaccessible parts of the forest for monitoring animal calls,” Koh told mongabay.com.

“These web-based tools greatly simplify the process of extracting useful results for researchers and managers from the raw data (i.e., recordings), which should help the users to improve and expand their ecological monitoring programs,” they write.

In the end, the goal for these new tools is to craft better protections for the world’s imperiled wildlife and place.

“Conserving and managing the biodiversity in the world is a major challenge for society, particularly in the tropics,” said Aide. “We hope that the tools we have developed will allow researchers, students, managers, and the public to better understand how these threats are impacting species, so that we can make informed conservation and management decisions.”