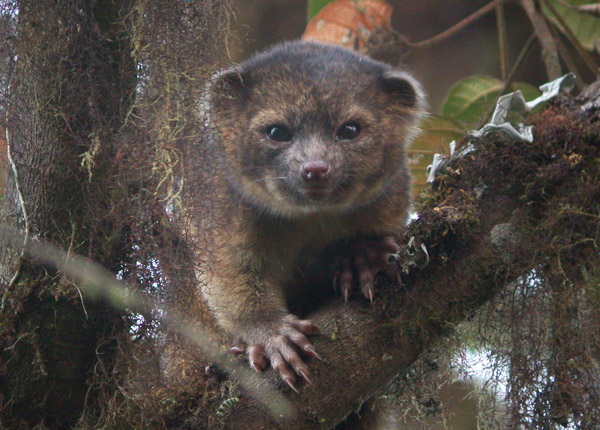 While the olinguito looks like a wild, tree-climbing teddy bear with a cat’s tail, it’s actually the world’s newest mammalian carnivore. The remarkable discovery—the first mammal carnivore uncovered in the Western Hemisphere since the 1970s—was found in the lush cloud forests of the Andes, a biodiverse region home to a wide-range of species found no-where else.

Dubbed the olinguito (Bassaricyon neblina), the new mammal is a member of a little-known, elusive group of mammals—olingos—that are related to raccoons, coatis, and kinkajous. However, according to its description in the journal Zookeys, the olinguito is the most distinct member of its group, separated from other olingos by 3-4 million years (or longer than Homo sapiens have walked the Earth).

You can tell them apart by looking at almost any feature!” Kristofer Helgen, the lead scientist on the team and Director of Mammals at the Smithsonian Institute told mongabay.com. “Olinguitos are smaller than olingos, with longer, softer fur (shorter and harsher in olingos), they are more more colorful (usually reddish-brown or orange-brown in olinguitos, more brown, tan, or gray in olingos), and they have a shorter, bushier tail, smaller ears, and a more rounded face. Olinguitos have larger molars, smaller bones of the ear, and somewhat differently shaped skulls compared to olingos.”

Olinguitos are also the only one in the family that inhabit high-altitude cloud forests at 5,000 to 9,000 feet above sea level.

It’s not that scientists were wholly unaware of the animal, but simply that for over a century they mixed it up with species of lowland olingos. In fact, the olinguito was even housed at U.S. zoos in the past, but was identified as an olingo. It’s smaller body, distinct shape, and high-altitude habitat was simply not recognized.

Helgen and his research team first noticed distinct differences between the olinguito and its relatives in museum specimens. This discovery led Helgen to try and find living animal in the wild—if they still existed. A video captured by an Ecuadorean zoologist, Miguel Pinto, of a wild olinguito, proved a breakthrough. And soon Helgen, along with Roland Kays, with the North Carolina Museum of Natural Sciences, were on their way to Ecuador.

“Discovering the existence of the olinguito first in museum collections was one of the happiest days of discovery in my life as a scientist, and finding the olinguito in the wild in Ecuador was better still. I have discovered many species of mammal new to science, but this is the most exciting one yet,” Helgen says. He and Kays spent three weeks studying the animal in Ecuador.

The scientists found that like lowland olingos, the little olinguito is primarily nocturnal and appears to spend most of its life in trees. To date the olinguito has only been observed feeding on fruit. Still, Helgen says the new species is rightly-considered a carnivore.

Helgen’s paper in Zookeys not only describes the new species, but also untangles the olingo family altogether. After years of research, the scientists now recognize four distinct species of olingo: the olinguito; the bushy-tailed olingo (Bassaricyon gabbii) found in Central America; Allen’s olingo (Bassaricyon alleni) from the Amazon east of the Andes; and the middle olingo (Bassaricyon medius) from Panama and western South America. This is the first time scientists have produced a conclusive family tree of the olingos. Notably, the olinguito, itself, is not a simple species: Helgen and his team identified four subspecies of the animal spread across the Andean mountains of Ecuador and Colombia.

“We have evaluated that the best IUCN ranking [for the olinguito] is probably ‘Near Threatened,’ based on rates of deforestation of their cloud forest home, which is their principal threat,” Helgen adds. “Setting aside as much cloud forest a possible in well-enforced protected areas is the best way to protect and preserve the olinguito, and so many other plants and animals that are found only in the same Andean cloud forest habitats.”

Helgen and his team hope that the new discovery will lead to greater conservation efforts in the Andean cloud forests, which are imperiled by deforestation for agriculture, livestock, logging, and mining. A paper published last year in BMC Ecology found that 80 percent of the Andes’ biodiversity hotspots (in Peru and Bolivia) remain unprotected. Meanwhile, research in the Andes is also lacking. A recent paper found that between 1995 and 2008, six times more ecological research was conducted in Central America than in the Andes.

“The cloud forests of the Andes are a world unto themselves, filled with many species found nowhere else, many of them threatened or endangered,” Helgen notes. “We hope that the olinguito can serve as an ambassador species for the cloud forests of Ecuador and Colombia, to bring the world’s attention to these critical habitats.”