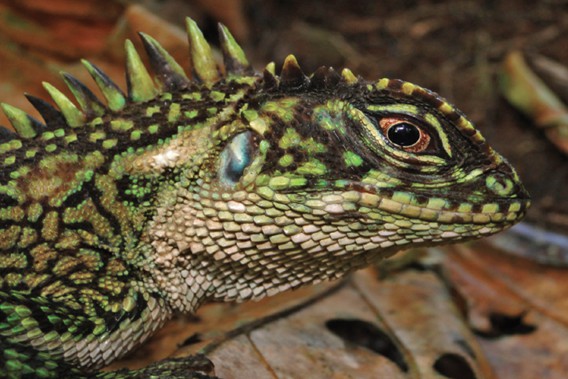 Scientists have discovered two new species of woodlizards from the Peruvian Amazon. Woodlizards, in the genus Enyalioides, are little-known reptiles with only 10 described species found in South and Central America. Described in a new paper in ZooKeys, both new woodlizards were found in Cordillera Azul National Park, the nations third-largest.

“These species were discovered in recent expeditions to poorly explored areas on both sides of the Andes in Ecuador and Peru, suggesting that more species might be awaiting discovery in other unexplored areas close to the Andes,” the researchers write.

Scientists named one of the new species Enyalioides azulae, or the blue woodlizard, after the Cordillera Azul (Blue Mountains). The other was named Enyalioides binzayedi, or Bin Zayed’s woodlizard after Sheikh Mohamed bin Zayed Al Nahyan who helped fund the expedition through his Mohamed bin Zayed Species Conservation Fund (MBZSCF).

Although there are only ten known woodlizards worldwide, an astonishing nine of them can be found in Peru.

“Thanks to these discoveries, Peru becomes the country holding the greatest diversity of woodlizards. Cordillera Azul National Park is a genuine treasure for Peru and it must be treated as a precious future source of biodiversity exploration and preservation!” said lead author Pablo Venegas from the Centro de ornitología y Biodiversidad (CORBIDI) in Lima, Perú.

The Cordillera Azul National Park spans both lowland Amazonian rainforest and cloud forests on the eastern ridge of the Amazon. A survey in 2002 found 58 amphibians and 26 reptiles in a portion of the park.

There was no data yet on whether or not these woodlizards should be considered threatened. Currently no woodlizards have been evaluated by the IUCN Red List, which is the world authority on endangerment status for species.